Emotional Awareness: Overcoming the Obstacles To Psychological Balance and Compassion

By the Dalai Lama and Paul Ekman. Times Books. 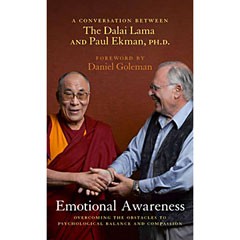 Paul Ekman is one of the most respected scientists in the Bay Area, internationally famous for his painstaking work in identifying emotions from facial expressions, even "microexpressions" that indicate when someone is lying. He developed training based on these findings that the Secret Service uses. He also proved one of Darwin's more obscure theories, that emotional expressions are the same across human cultures.

In early 2000, he agreed to participate in a dialog of scientists with the Dalai Lama, mostly because he could bring his daughter along -- she was a dedicated Buddhist who'd been to Tibet. It changed his life.

That discussion on "destructive emotions" was the eighth in the "Mind and Life" series with the Dalai Lama that will convene its 18th session this spring. There are books derived from eight of them; I've read seven, and Destructive Emotions (Bantam) is among the best. While western sciences like neurobiology and psychology work from the outside with objective tests, Buddhism -- particularly Tibetan Buddhism -- has developed complex and subtle concepts from interior observation.

That 2000 conference shaped Ekman's subsequent researches, and sent him back for some 39 hours of one-on-one dialogs with the Dalai Lama, resulting in this book. The subject is the title: Emotional Awareness. The topics include how emotions arise, how they are experienced and lead to behavior, as well as specific sets of emotions, from anger to compassion.

Apart from the concepts, there's drama in the Mind and Life books (will science and "religion" clash?) and comedy, chiefly in the scientists' reaction when the Dalai Lama asks an incisive question or spots a logical flaw. Few know that Tibetan monks are trained in debate -- in the monastery it's the principal spectator sport.

The human drama in this book emerges in pieces, as Ekman reveals aspects of his own life -- such as his abusive childhood, and his resulting problems controlling his temper -- which suggest why he has been studying emotion for a half century.

Towards the end Ekman reveals something else. It was not just the discussion in 2000 but a wordless moment with the Dalai Lama that changed him, leading him to write: "We have seen it in our lifetimes again and again, that when we do not have the tools or methods to scientifically study something, we ignore it -- or even worse, claim it does not exist."

It is Ekman's openness to evidence, no matter where it comes from or leads, that is science at its best. He investigates what matters to him as a human being, husband, father and member of the community, and also in view of the legacy he leaves to the future. That the steps along the way are still a bit awkward is less important than the illuminating attempt.