Even without Jar Jar Binks, this week’s releases ring false 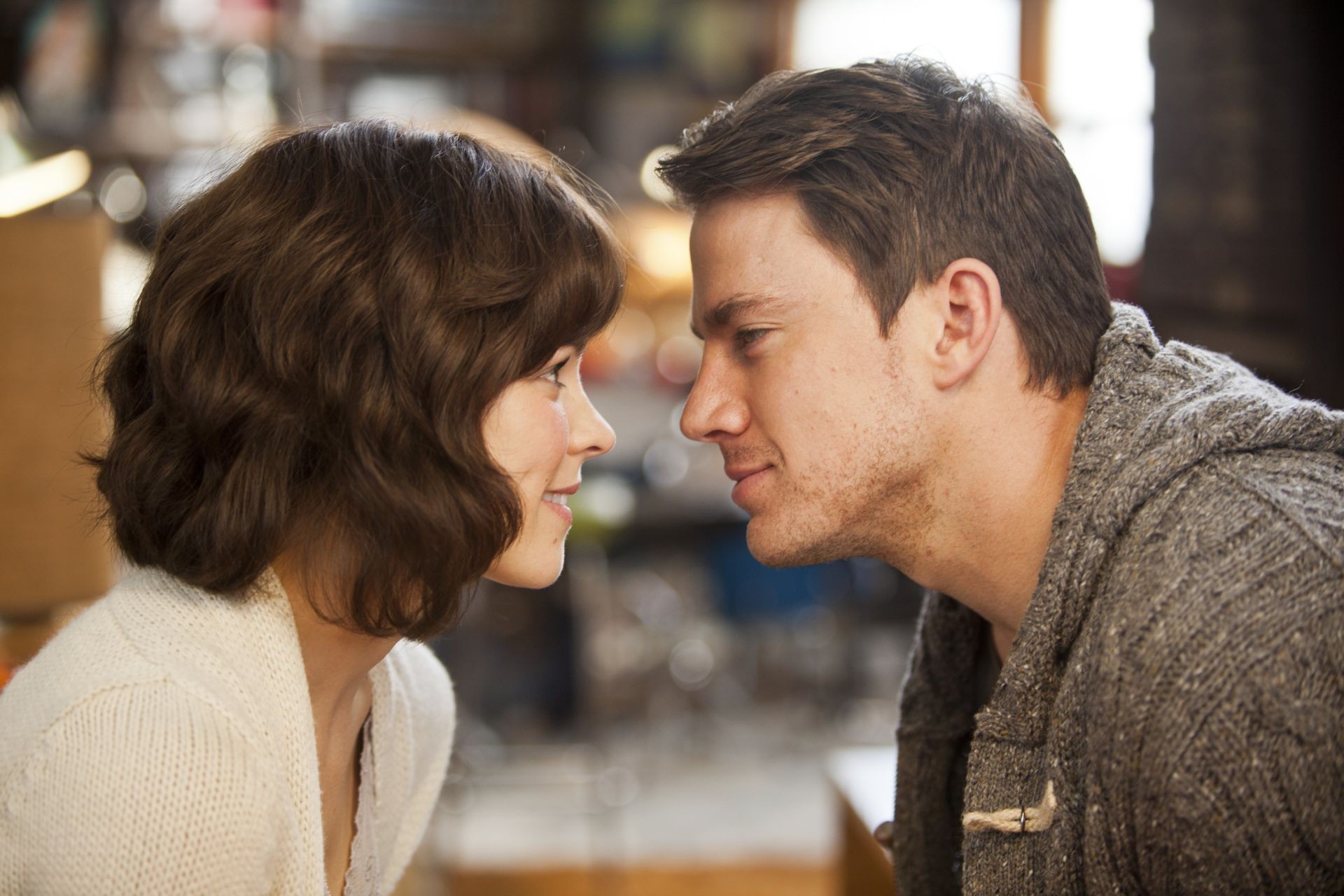 THE VOW. There is a moment, midway through The Vow, when Rachel McAdams flubs a line, spits chocolate into her own hair and falls apart laughing. The scene is obviously an outtake, and we cut away before she or costar Channing Tatum fully break character. It's a completely organic moment, and it happens to be the only one in the whole movie. As such, it highlights the fact that The Vow is disappointingly superficial.

The simple story has been told before, though it's apparently inspired by true events. A happily married couple survives a car crash, but it robs the wife of every memory of her married life. Essentially, she reverts to the woman she was before meeting her husband.

If the filmmakers had approached the subject differently, they could have filled this movie with moments like the one described above. I think McAdams and Tatum have it in them, if directed properly, to really live in the characters they play. Not to say either one could pull off Margaret Thatcher, but they're both talented enough. Unfortunately, director/co-writer Michael Sucsy treats them more as names on a marquee than actors, so their talents are mostly wasted. Plus, I would have a hard time believing Tatum as a bohemian indie-rock producer, no matter who was directing. Dressing him in cabled sweaters with toggle buttons doesn't help. He looks like he's trying unsuccessfully to fit in at a Big Sur key party circa 1973.

My wife and I saw this in a theater full of people who couldn't have enjoyed it more. They laughed at all the jokes, sighed at the sad parts and got all giggly whenever Tatum took off his shirt. Based on that reaction, the movie is a resounding success. But for me, it never digs deep enough into the terror and desolation that would inevitably accompany such events. PG13. 104m. At the Broadway and Mill Creek.

JOURNEY 2: THE MYSTERIOUS ISLAND 3D. I was prepared to really enjoy this sequel to 2008's Journey to the Center of the Earth. I never saw the first installment, and beyond the trailer I had no idea what to expect. But I like fantastical escapist fare as much as anybody, and with Luis Guzman, Michael Caine and Dwayne "The Rock" Johnson in the cast, I had high hopes -- hopes that were dashed almost immediately.

The basic premise is completely implausible, but I can forgive that. A teenaged Jules Verne acolyte (Josh Hutcherson) somehow intercepts an encoded radio transmission from his long-lost adventurer grandfather. His stepfather (Johnson), who happens to be a Navy-trained cryptographer, helps him decipher the message. Then they fly halfway around the world, charter a helicopter and crash land on a mysterious island. Complications ensue.

The problem here is that the filmmakers seem to think they have to dumb-down the material just because it's a family movie. The jokes are flat and obvious, and the dialogue is mostly exposition. Midway through, Journey 2 becomes a disaster movie, but the danger that might have made it thrilling never materializes. So we're left with an adventure comedy with a stunted sense of humor and low-stakes action.

Despite the presence of a surprisingly capable cast and a fun conceit, Journey 2 never rises above mediocrity. The cinematography is unimaginative, and the director seems more interested in 3D tricks and CGI than storytelling. What could have been high adventure in a classic vein comes off contrived and uninteresting. PG. 94m. In 3D and 2D at the Broadway, Mill Creek and Fortuna.

SAFE HOUSE. Ah Denzel Washington, who will never age. Despite wearing a salt-and-pepper goatee, he looks the same as he did 10 years ago. A character in Safe House even calls him the black Dorian Gray. Thanks to that, and his usual smooth bravado, Washington carries the movie, barely escalating it above the standard CIA actioner we've all seen so many times.

Ryan Reynolds co-stars as Matt Weston, an inexperienced agent tasked with minding a seldom-used safe house in Cape Town, South Africa. (Why the movie needs to be set there I'm still not sure). He's frustrated that he can't get himself a more exciting post. His daily routine is boring, but he's got an impossibly sexy French doctor girlfriend to keep him entertained. One day the monotony is broken by the arrival of captured rogue operative Tobin Frost (Washington) and a team sent to interrogate him. Midway through the proceedings, mercenaries attack the house and kill almost everybody. Weston and Frost set out on the run, forging an uneasy friendship along the way.

There's an impressive car chase and some fist-fights and shoot-outs in the Bourne tradition. Reynolds and Washington have pretty convincing chemistry, but there is little else to distinguish this from the countless spy-action thrillers that have come before. The central conflict involves Washington trafficking in information about corruption in the international intelligence community. For the majority of the movie, though, this twist is just an incidental device to move the protagonists from one dust-up to the next. When it comes back around at the end, the resolution it brings seems patently untrue and tacked-on. Safe House is sure-footed and competent enough, but too standard and derivative to stand out.  R. 115m. At the Broadway, Mill Creek and Fortuna.

GHOST RIDER: SPIRIT OF VENGEANCE 3D. Nicolas Cage returns as Johnny Blaze/Ghost Rider, the hog-straddling Marvel antihero who jousts with the devil. PG13. 95m. In 3D and 2D at the Broadway, Mill Creek and Fortuna.

THE SECRET WORLD OF ARRIETTY. Studio Ghibli, the Japanese animation house behind Hayao Miyazaki masterpieces such as Spirited Away, brings this family-friendly film about the 4-inch-tall Clock family, who get discovered by a normal-sized housemate. G. 94m. At the Broadway.

Just in time to soothe that post-Valentine's Day depression, The Arcata Theatre Lounge gets all historically romantic on us with the greatest movie of all time,* Gone With the Wind. The four-hour plantation epic from 1939 shows Sunday at 6 p.m. On Wednesday, Sci-Fi Pint and Pizza night brings the second greatest movie of all time,** Krull (1983), a campy sword-and-sorcery tale involving a beast and a big throwing star. The second half of the double-feature is She Gods of Shark Reef (1958), a babes-in-bikinis adventure from drive-in schlockmeister Roger Corman.

**Source: absolutely no one.

ALVIN AND THE CHIPMUNKS: CHIPWRECKED. People actually go to movies like this, which is why the rest of us can't have nice things. G. 87m. Through Monday at the Garberville.

THE GREY. A plane crash strands Liam Neeson and a band of oil drillers in the frozen wild, where they fight wolves . R. 117m. At the Broadway and Mill Creek.

ONE FOR THE MONEY. Worst-movie-of-the-year candidate stars Katherine Heigl as a bail bond agent charged with hauling in her high school ex. PG13. 106m. At the Broadway.

STAR WARS: EPISODE I - THE PHANTOM MENACE. Have your childhood memories re-befouled, in 3D. PG. 140m. At the Broadway, Mill Creek and Fortuna.

UNDERWORLD AWAKENING. Kate Bekinsale squeezes into a leather catsuit to battle vampires and werewolves. R. 88m. At the Broadway.

THE WOMAN IN BLACK. Daniel Radcliffe (Harry Potter) stars as a young lawyer who encounters a vengeful ghost. PG13. 95m. At the Broadway, Mill Creek and Fortuna.