Take Northern Humboldt Unified High School District as an example. Superintendent Roger Macdonald said the district received $1 million in special education funding from the state and federal governments but but spent more than $3.7 million providing for its students, leaving a deficit of more than $2.6 million to be taken from the district's general fund.

"It's called an encroachment on the general fund," Macdonald said. "It sounds scary to parents and teachers but it just means we don't have the $2.6 million to spend on other things, like expanding culinary or music classes or give raises or benefits."

Special education funding comes from a complex patchwork of state and federal streams, but the two don't cover the costs of providing services, meaning districts like Northern Humboldt have to bridge the gap. 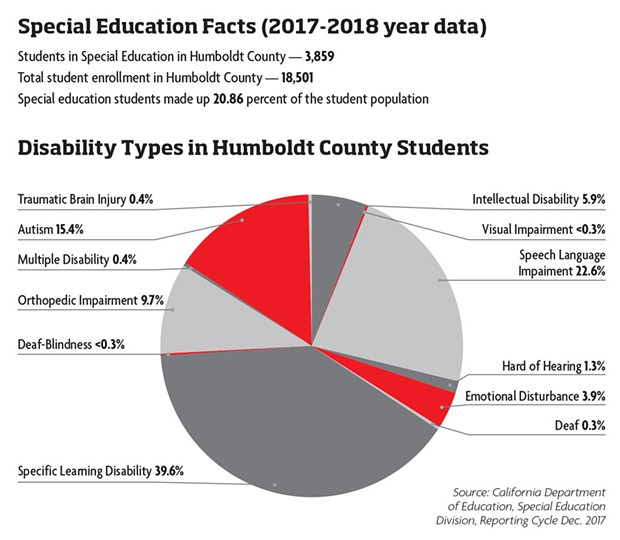 County Superintendent of Schools Christ Hartley said part of the problem is that the structure for special education funding was set up in the 1970s and is "no longer relevant to the current student population."

"For Humboldt County, this is an equity issue," he said in an email to the Journal, adding that the county remains near the lowest in per-pupil state special education spending. "As a result, Humboldt County districts are disproportionately using more general fund dollars to fund the mandated services required to meet the needs for students in special education."

Statewide, about 11 percent of the student population, or about 795,000 students, have documented disabilities. But locally, students with disabilities make up 20 percent of Humboldt and Del Norte counties' student population, a nearly two-fold increase from the state, according Mindy Fattig, executive director of the Humboldt-Del Norte County Special Education Local Plan Areas, which, also known as SELPA, oversees special education services in the two counties.

Fattig, whose career in special education services spans 24 years, said that funding in California is allocated to each SELPA and then a policy council — SELPA's governing body made up of 13 local superintendents — determines how much funding goes to each district.

There are 132 SELPAs in California that serve as the state's designated associations "of professional educators organized to present, review and evaluate major special education issues." They collaborate with school districts and county agencies to ensure a "healthy and enriching environment" for students with disabilities and are responsible for ensuring program availability, staff development, regionalized services and program specialists, and much more. In addition to managing the SELPA as its executive director, Fattig's role is mediating conflicts between districts and families, ensuring students are receiving the services they need, helping staff write and providing professional training on the Individualized Education Programs required for all special education students.

In 1975, Congress passed the Individuals with Disabilities Education Act (IDEA), which committed to funding 40 percent of the cost of special education and related services, though Congress has never fully funded the pledge. Jonathan Mendick, a representative with the California Department of Education, said IDEA is allocated using a formula that's based on population and poverty levels.

"The original premise of IDEA was to cover 40 percent of the excess cost of providing special education and related services to children with disabilities," Mendick said in an email to the Journal. "Nationally, it is estimated IDEA only covers about 15 percent of the excess costs for special education, less than half the original full funding level promised when IDEA was enacted."

The second part of special education funding in California comes from the Special Education Program under Assembly Bill 602, which provides funding to SELPAs based on average daily attendance. For the 2017-2018 school year, Humboldt and Del Norte counties received about $10 million in state funding to provide special education services.

Together, the federal and state governments provided about $14.1 million for local districts to provide special education services that year, which covered only a small portion of the $51 million spent on such services locally, according to Corey Weber, Humboldt County Office of Education's director of fiscal services. The rest of the expenses, Weber wrote in an email to the Journal, are "covered by various grants, local funds and contributions from the district/county's general fund unrestricted revenues."

Fattig, who's in her eighth year as SELPA's executive director, said the funding gap has impacts

"Even though we don't have enough (special education) funding, we still find a way to provide the services that are necessary through other funding," Fattig said. "Humboldt County has the highest number of students in special education in the state of California, but we are one of the lowest funded SELPAs."

Huffman, meanwhile, has previously submitted his IDEA funding bill twice before but it has never passed the House. Now on his third at tempt, Huffman has recruited 53 bipartisan cosponsors for the bill, according to his office.

Recently, Huffman helped ensure the Appropriations Committee and the Labor, Health and Human Services, Education, and Related Agencies subcommittee approved an additional $1 billion in IDEA funding for the fiscal year, according to a press release from his office.

"All students deserve access to a free and appropriate public education — that's the promise of federal law," he said in the press release. "But Congress and the president have repeatedly failed to meet the federal commitment to children with disabilities. This funding increase is an important step in the right direction. ... I will keep pushing to fully fund IDEA so that we support children with special needs, their families and their schools."

Marilyn Lucey, who received a graduate degree in special education and currently works for Special Education Advocacy, is familiar with the funding legislation. She said the first step to equalize special education funding is to raise the federal contribution to IDEA's originally pledged 40 percent.

"While the efforts in California to increase the funding to special education is a step in the right direction, until we can fully fund the promise of the federal government in IDEA to fund 40 percent of the true cost of providing the supports and services our students with disabilities require for a free and appropriate public education, we still have more work to do," Lucey said in an email.

"The unfunded mandate has placed a great burden on the state and local school districts and has created a fiscal responsibility that is nearly impossible to meet ... and also created a system that pits the schools and caregivers in opposition, which isn't fair to anyone," she said. "With less than half of the 40 percent ever provided, it is easy to see how schools and caregivers struggle to provide truly individual education plans."