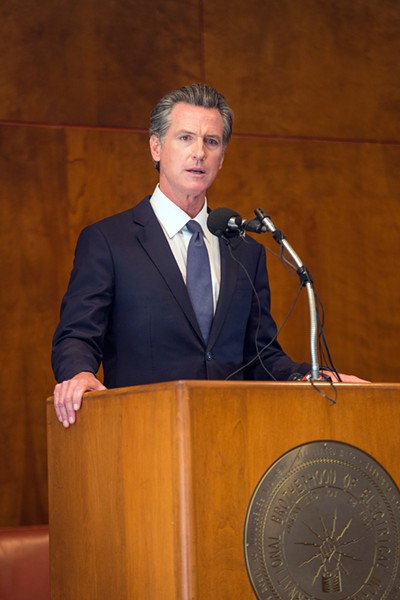 Toddlers and preschoolers who have mostly known a school life with tiny masks may be in for a big lifestyle change after Friday, when the state mask mandate for kids ends at midnight.

While wearing masks is still strongly recommended, some medical experts worry removing the state mask mandate could be risky, especially for tots.

The change shifts the onus of requiring masking to child care and preschool operators, schools and school districts.

"The wisest thing to do is go from a requirement to strongly recommending (masks) and recognizing that there may be some places where they want to continue masking and that is okay," said Tomás Aragón, state public health officer and director of the California Department of Public Health. "We are leaving it up to the county, district or schools."

In Humboldt County — which continues to be designated as an area of "high" COVID-19 transmission risk by the U.S. Centers for Disease Control, prompting federal, state and local health officials to continue recommending that everyone continue to mask in all indoor public spaces — districts have taken different approaches.

The Rio Dell Elementary School Board voted unanimously Feb. 17 to buck the state mandate and adopt a policy prohibiting its schools from pursuing disciplinary actions against students refusing to wear masks on campus, and Ferndale Unified School District notified parents March 8 that masks would be optional on campus beginning March 14. Eureka City Schools made a similar announcement, while the Northern Humboldt High School District and Fortuna Elementary School District boards were slated to take up the issue as the Journal went to press March 8. Other districts, including the Arcata School District, however, have opted to continue requiring masks, at least for the time being.

Meanwhile, some of the state's largest districts have also announced they plan to keep mask mandates in place on their campuses, even in areas with some of the state's lowest transmission and highest vaccination rates. Los Angeles Unified, San Francisco Unified, South San Francisco Unified and San Diego Unified have all announced they will keep indoor mask mandates in place indefinitely.

Aragón told CalMatters that March 11 was selected because, by then, state officials project that infections will have declined even more. It also gives schools and families more time to make decisions or prepare for the change.

Some parents throughout California have been vocal about wanting the mask mandate in schools lifted. At the Discovery Preschool in Truckee, children have not been wearing masks for a few months, said Courtney Dent, the school's assistant director, in violation of state guidelines. The Nevada County preschool has 72 students ages 2 to 5 years old. Dent said some children in January wore masks because of the surge, but the school leaves it up to families.

Masks are required for staff, teachers and parents of children at Discovery Preschool. Other safety measures include taking kids' temperatures when they arrive, not allowing parents into the classrooms and doing activities outside.

Dent said they are waiting for the rules to change for the staff. "I hope to god it does change, we are all ready," she said.

While schools like Discovery Preschool have already made the decision to not require masks, some experts say the state's decision to end the mandate comes too soon, especially for California's smallest residents, who are not eligible for vaccination against COVID-19.

"The message the public has heard is, 'Masks are not necessary,'" said John Swartzberg, clinical professor emeritus of infectious diseases and vaccinology at the U.C. Berkeley School of Public Health. "The state is leaving the decision to the parent or the adult. That's fine, but now the parents are struggling with the decision."

Swartzberg said another two to three weeks would have meant knowing for sure the case rate has decreased enough to lift the mandate instead of relying on predictions.

"That is hope, that the trajectory will continue," he said about the state's projection. "I think it's a fairly safe bet, but I think public health policy should be based on health unless the policy is having significant harm."

Shira Shafir, an infectious disease epidemiologist at the University of California at Los Angeles Fielding School of Public Health, goes even further for the 2 to 5 year olds.

She points out that these children are ineligible to be vaccinated, can get infected, can transmit the infection to others and, while rare, can get severely ill from COVID-19. They are also often in the same facilities with infants under 2 who cannot wear masks.

"The wise thing to do is to continue to have children mask until they are eligible to be vaccinated and there is a sufficient number of them vaccinated to be protected," Shafir said.

Experts agree that for the smallest children, the most effective protection is for everyone around them to be vaccinated.

While some have worried that masking impedes learning or development, Shafir, Swartzberg and Aragón say there is no evidence of developmental or emotional downside to children masking.

Aragón said a variety of factors went into the state's decision to lift the mandate, including the rate of new coronavirus cases, the number of vaccinated Californians, how many people the omicron variant infected and the lessons learned about COVID-19 over the last two-plus years.

Swartzberg questions the decision, noting that California did not follow the Centers for Disease Control and Prevention's recommendation to lift mask mandates last June because the state's rate back then was three new cases per 100,000 people. He wants to see the rate at least that low again before students are allowed to pocket their face coverings.

Since then, so many people have been infected by the Delta and Omicron variant surges that the calculation has changed, Aragón said.

Plus, a mask in a school setting, Aragón said, has been just one tool to reduce transmission. Now, schools will need to focus on ventilation, getting kids to stay home when they are sick and other precautions.

Swartzberg is concerned that this is another area where there will be inequity. When masks come off and protection is dependent on filtration systems, fans and outdoor time, then schools or child care centers with fewer resources will be less safe.

Mask rule changes for schools and child care sites have been slower to come from the state than for restaurants, retail stores or public events.

"Children have no choice, they have to be in school. They don't have a choice who they sit next to and they spend a long period of time day after day with other people," Aragón said. "So we are extra protective of the children with the primary goal of keeping the schools open."

By lifting the mandate, the state has shifted the responsibility to the child care, preschool and school officials, and that makes things more difficult for them, especially in this politicized environment, experts said.

When masks were a requirement, at least a preschool had state law to lean on, Shafir said.

"Now that it's strongly recommended, it forces the administration, the heads of preschools, day care, toddler yoga, whatever it is, to decide," she said. "They no longer have that protection from the state to implement a policy that is in the best interest of the children."

And it's easier for kids to do when all of them are required to wear a mask, she said.

Shafir is the parent of a 3 year old who attends a university-run preschool. The children there are required to wear KN95 or similar masks and get weekly nose-tickle COVID-19 tests.

Shafir said her preschool is keeping masks and other precautions in place for students through the end of March.

"We hope that families and places will continue to (wear masks)," Aragón said. "We recognize there are some families in some parts of the state that feel differently and don't want to wear a mask, and this gives them the opportunity to do something different."

Kimi Mtovic, who owns Miss Kimi Family DayCare in San Jose, said she and her staff are keeping their mask on.

"We are not comfortable taking the masks off," she said. "For the kids, it's going to have to be up to the parents, whatever they are comfortable with."

In his last press conference as Humboldt County's health officer, Ian Hoffman was asked directly about his stance on masking in local schools.

"I think we've made it very clear that we still strongly recommend that after March 11, that the schools continue to mask," he said.

CalMatters is a nonpartisan, nonprofit newsroom committed to explaining California policy and politics.