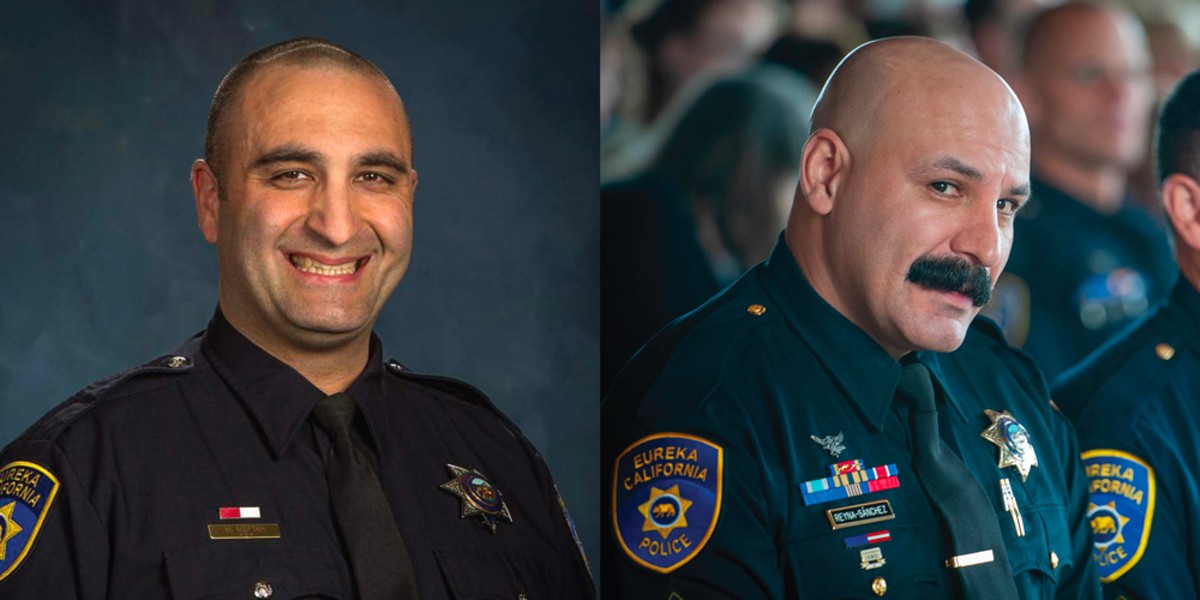 We've seen enough — enough to know that Eureka Police Department Sgt. Rodrigo Reyna-Sanchez and officer Mark Meftah have no business wearing a badge and holstering a gun; enough to to know there's a cancerously toxic culture in at least one of EPD's units; enough to know the trust has been irrevocably broken.

Now, we're not naïve or, as a newsroom, immune to gallows humor. We get that finding some humor in the bleak is a necessary coping tool that helps us through — perhaps those whose job it is to navigate society's worst on a regular basis, most of all. We get that. But this is not that.

When an officer looks upon a burning building and his first thought is to fantasize about rounding up homeless people to shove them inside, as you'll read about in this week's cover story, well, that officer needs to lose his badge. When officers repeatedly use terms like "snatch" and "bitch" to refer to the women around them while objectifying them, how do we have any reasonable expectation as a community that they'll step in to protect them when they're in danger or won't take advantage when they're vulnerable? When an officer refers to a suicidal military veteran killed in a standoff with police using an acronym for "piece of shit" with "several extra holes in him," how do we as a community have any reasonable belief that he values the sanctity of life? When an officer pleads to go to a standoff because he needs to "work out some frustrations," how can we have any expectation he'll de-escalate the situation — or the next one — when he gets there? We don't. We can't. We've already seen too much, more than enough to know these men can't be trusted to act in our names or protect our rights.

This is absolutely not to say that Eureka should fast track the third-party investigation it has commissioned to look into the situation. It shouldn't. It can't.

We applaud Eureka's decision to bring in a high-powered, out-of-area firm to investigate the department, and the city's willingness to contractually give that firm "full discretion" to conduct the investigation without the city "influencing or interfering with the outcome." This investigation needs to biopsy every tumor, every sign of malignant growth, until it's clear to what degree this cancerous culture has been allowed to metastasize throughout the department. If that means it spans months and costs tens of thousands of dollars, that's what needs to be done and the costs pale in comparison to the alternative.

We say this knowing all too well the investigation's full findings likely won't — and probably can't — be made public unless they find one of the officer's involved was dishonest. The truth is that California's laws are overly protective of police officer personnel files and disciplinary actions. We won't know if or why a sergeant is demoted or an officer suspended — given "days at the beach," as those who don a badge sometimes call it — much less if someone gets a written reprimand or ordered to undertake additional training.

And that makes it all the more imperative that Meftah and Reyna-Sanchez be fired. Thanks to whoever decided to leak a host of text messages to the Sacramento Bee, we've seen their conduct. Now we need to see the consequences.

We understand the legal protections police officers enjoy, the high-priced attorneys who will jump to their defense through the seemingly bottomless coffers of the Legal Defense Fund. We expect that when he has the investigation's findings in hand and decisions to make, Chief Steve Watson will have people in his ear urging caution, warning of the potential consequences of overstepping to fire an officer. We don't envy his position.

But when that day comes, we urge Watson to also consider the consequences of doing too little, to think about the message that would send to everyone in his department and everyone in this community, to weigh the potential liability of a personnel action against that of leaving guns and badges in the hands of people unfit to wield them.

He must consider the cost of not doing enough when we've all seen too much.