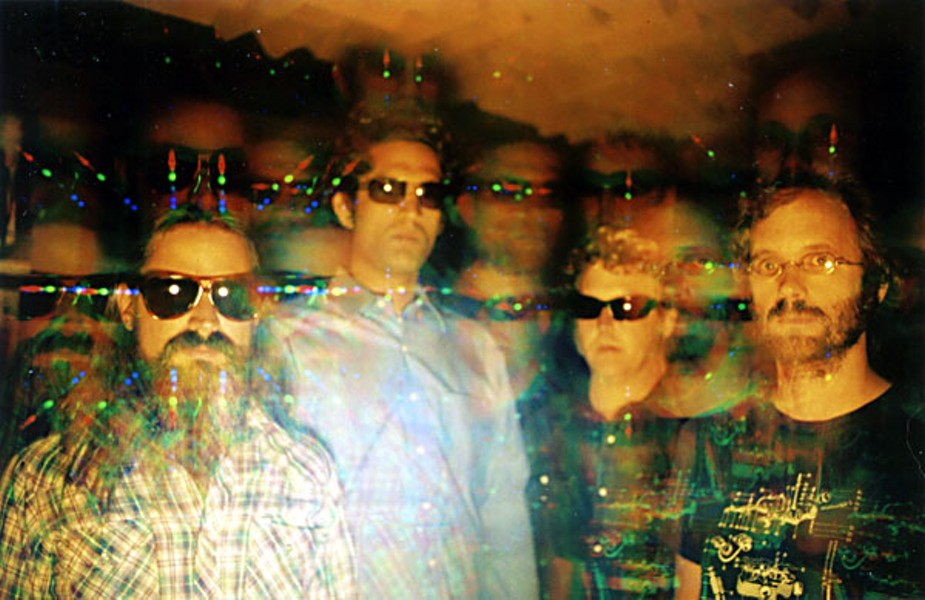 When your band is from San Francisco and you describe your music as psychedelic rock, comparisons to the psychedelic ’60s are perhaps inevitable. Such is the case with Wooden Shjips.

"We think of ourselves more as a rock ’n' roll band, but we get tagged with psychedelic," said Wooden Shjips "ringmaster" Ripley Johnson in a call from his Frisco home. "We grew up listening to a lot of ’60s music and classic rock. I relied on my dad's record collection for the most part -- he had maybe 1,000 records, and maybe 20 were any good -- but I listened to those 20 over and over."

Based on the Shjips' sound, I'd guess there were Doors records among them, some blues, Cream, maybe Blue Cheer and/or Vanilla Fudge, definitely Neil Young.

Said Ripley, "If someone made a record today like Neil Young's Everybody Knows This Is Nowhere with its extended jams, I think it would be called psychedelic rock, whereas back then it was just called rock ’n' roll."

Ripley, who plays lead guitar, put the band together three years ago. "The first iteration of the group was all non-musicians, people who had never been in a band before and didn't know how to play their instruments. It was sort of this experiment in primitivism. I didn't expect it to last very long."

And it didn't. When take-one of Shjips broke up after making a few recording, Ripley reconfigured and reconvened. "I didn't want to stop playing," he said. "Nash [Whalen], our keyboard player, was on guitar then; I asked him to switch to keyboard. Dusty [Jermier] and Omar [Ahsanuddin] were friends of ours looking for something to do. It ended up being really fulfilling for me, to be able to hone in on the musical elements that mean something, to focus on primitive rock and repetitive rhythms, basically long drawn-out rhythmically-based jams."

Yes, they jam, but Shjips is definitely not a jamband. "It's funny, a lot of the so-called jambands don't seem be very jammy, and a lot of the so-called psychedelic bands are not that psychedelic," said Ripley. So, don't come to the Wooden Shjips show at the Alibi this Thursday expecting jamband psychedelia. The songs tend toward stretched out improvisations on the raw side. "Trance" and "garage" follow psychedelic on their MySpace -- and both apply, but at the heart, as Ripley insists, this is rock ’n' roll. The local psyche-trance-garage band Nipplepotamus opens.

Fans of keyboard player Wayne Horvitz will recall that his groove jazz quartet, Zony Mash, was superceded a few years ago by an acoustic combo he calls Sweeter Than the Day. "Zony Mash didn't break up; we ceased to exist," said Horvitz calling from an airport on his way back to his Seattle home. "It wasn't like the breakup of the Beatles where they didn't want to talk to each other any more. Sweeter Than the Day was essentially the same band," which is to say Horvitz on keys and Tim Young on guitar with a rhythm section.

A short-term Zony resurrection came amid plans for a 20-year retrospective marking Horvitz' time in Seattle after leaving the New York downtown/outside jazz scene. But this time Zony Mash is different: a four-piece horn section has been added with Briggan Kraus (from Sex Mob) and the always-wild Skerik on saxes, Dave Carter (from Skerik's Syncopated Taint Sextet) on trumpet, and Steve Moore on trombone, all of them jamming on the Z-Mash songbook.

More than one local hipster has complained about the fact that those legendary New York, New Wave party monsters The B-52s are playing at HSU the same night (Friday) that Hope Sandoval and The Warm Inventions are at the Arcata Theatre Lounge. I have to admit, I was not all that impressed by the retro-rock of The B-52s in the ’70s when they scored a minor hit with "Rock Lobster," and it doesn't seem like they've progressed much in 30 years.

Hope Sandoval is best known for her work in the ’90s with the dreamy indie pop-folk outfit Mazzy Star. More recently she's been recording with Irish drummer Colm Ó Cíosóig from My Bloody Valentine (as far as I can tell, he is The Warm Inventions), making cool, emotionally-charged music that I like just as much as Mazzy Star. The second Inventions album, Through The Devil Softly, hits the street next week and Hope and Colm are mounting a rare tour with the new material. The like-minded Dublin-based dream-folk combo Dirt Blue Gene is touring with them, playing some of their own music and providing backing. As an added bonus the ATL show also includes crystalline dub-folkies Brightblack Morning Light, a band with roots in Arcata.

Across town at Humboldt Brews that same night, it's a rare live show by The Nucleus, who haven't played out much what with assorted babies and businesses to take care of. Their rockin' set will be followed by deep funk from The Bump Foundation. I imagine you'll find a few of the same players at the Jambalaya the previous night (Thursday, Sept. 24), where keys whiz B. Swizlo is reassembling The Hip Hop Lounge. I'm told Blair Shots is coming up L.A. for the occasion and DJ Jedi is back from Spain to take his place behind the turntables in the nine-piece.

You might call Saturday testosterone night at the Blue Lake Casino. There's the mixed martial arts event, "Showdown in the Sapphire V," in the Palace, while hard-rockers Dragged by Horses and Side Iron share the bill at the Wave, with slots and cards in between. Meanwhile, Saturday at Cher-ae Heights Casino, catch Redbone, who hit it big 35 years ago with the song, "Come and Get Your Love."

Tuesday, Sept. 29, Nocturnum goes ska with the classic 2nd-Wave Brit band, The English Beat, plus Monkey, one of my faves from the Bay Area Cali-3rd-Wave scene of the ’90s. Wednesday the 30th, it's raw gospel blues by Reverend Deadeye, a son of a snake handling preacher who calls himself a "no man band" since he plays solo, wailing out wild songs while stomping out a beat on some homemade contraption.

Finally a reminder: The 13th annual Earthdance Festival starts Friday and runs through Sunday at Black Oak Ranch north of Laytonville. The line-up is über-eclectic with electro-jams by STS9 and BLVD, Galactic's N'arlins grooves, neo-soul by India.Arie, poz-hip hop by Lyrics Born, reggae's "Riddim Twins" Sly and Robbie, the rockin' stringband, The Devil Makes Three, Afrofunk by Albino!, Portland's wild and crazy March Fourth Marching Band, DJs galore and on and on through dozens of acts spread through five stages and domes. Culmination is a 4 p.m. Saturday "Prayer for Peace" with the Mendo event coordinating with simultaneous Earthdances around the globe.

Earthdance brings together music lovers, ravers, hippies, jamband fans, spiritual seekers and more for a weekend dedicated to the notion, "Give peace a dance," and what could be better, except maybe adding that simple hippie credo: peace and love.