The Eagle doesn't fly, and don't bother to Just Go With It 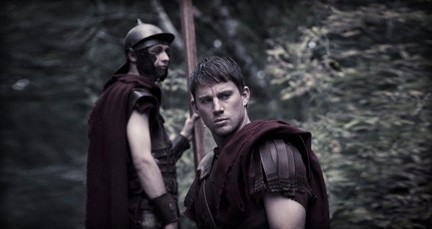 THE EAGLE. Epics have been a major genre almost from the beginning of film history, the earliest being imports from Europe. The best known from the silent era are probably Birth of a Nation and Intolerance from D.W. Griffiths, both released before 1920. The form seemed to have reached its high point with all those 1950s Hollywood epics, often set in Roman times, such as Quo Vadis and Ben-Hur. In fact, I used to be convinced that Charlton Heston put on a tunic when he got up in the morning.

Like the western and film musical, the form faded away somewhat after 1970, but also like those genres, rose from the ashes around the 1990s. I guess there are a lot of people out there, most likely not young, who unaccountably have a nostalgia for the 1950s despite David Lynch's savage deconstruction of the decade in Blue Velvet. One would think I might be among that group, since the decade encompassed all of my junior and senior high school and college years. Well, I hated my times in grades 7-12 and off the top of my head I can't think of a single Hollywood film from the 1950s that I would list in my top 1,000.

All of which brings me to the latest dreary and tedious iteration of the historical epic, The Eagle, based on a 1954 historical novel, which is set in the early second century AD (or CE to be more current) during the Roman occupation of England. Here we have Channing Tatum swinging a sword while dressed in a tunic instead of Heston.

The story centers on young Marcus Aquila (Tatum) whose father's legion (apparently some 5,000 men) disappeared, along with their standard the eagle, in the uncivilized north of England in AD 120. Twenty years later, after recovering from a serious battle wound, Marcus sets off with Esca (Jamie Bell, Jumper), a slave from a tribe in the north that he saved from death-by-gladiator, to venture into the wilds of what is now Scotland to discover the truth about the lost expedition while reclaiming his family honor in the process. Along the way, they encounter various tribes including the Seal people, who appear to be from footage cut from Avatar.

But this short summary can't begin to give the reader a flavor of the pure tedium of the film. The whole opening scene exists merely to demonstrate Marcus' valor, while the long trek with Esca is mostly a riff on The Admirable Crichton conceit. For the faithful, there is a battle of sorts toward the end where old soldiers get another chance to defend the eagle, which is probably a symbol for something important. Tatum's "performance" almost made me nostalgic for Heston. Almost. Rated PG-13 for battle sequences and some disturbing images. 114m. At the Broadway and Mill Creek.

JUST GO WITH IT. Wow, two really awful films in one day, an experience made even more painful because I could still easily remember what a really good film felt like, thanks to last week's Blue Valentine. To say that I laughed a few times is not to pay Just Go With It a compliment, but to observe that I was probably desperate to pretend I was being entertained after sitting through The Eagle.

The film is actually based on a 1965 Broadway play by Abe Burrows (from the French play Fleur de cactus) that also spawned the dimly remembered 1969 film Cactus Flower. A quick Google search shows that Goldie Hawn won an Oscar for her performance in it. Well, I'm ready to honor Just Go With It with any number of Razzies even though it's only February.

The story centers on nip/tuck doctor Danny Maccabee (Adam Sandler) who has an insatiable penchant for younger women. His success with this demographic is the result of wearing a wedding ring when he goes to a bar and then pretending that his life has become a disaster because of his (alcoholic, spendthrift, drug addicted, etc.: pick one) wife. It seems to work like magic.

Of course, though, he meets 23-year-old Palmer (Brooklyn Decker, whose credits include Lexie on the Ugly Betty episode "The Weiner, the Bun and the Boob") who appears to be the one he's been always destined for. Unluckily, she finds the fake wedding ring in his pocket following a night of sandy sex. The result is to generate the film's primary plot, which involves Danny's medical assistant Katherine (Jennifer Aniston) pretending to be Danny's about-to-be-divorced spouse.

It doesn't take a film critic to guess how all of this will turn out once the dog and pony show travels to Hawaii. Nicole Kidman contributes a mostly unfunny performance as Devlin, an old acquaintance of Katherine's, whose name became Katherine's code word for bowel movement to her two children. Aniston, who I still persist in believing to be a good actor, adds another lousy film to her resume (following The Switch, The Bounty Hunter and Love Happens).

In the midst of all the usual bathroom humor and other hallmarks of the genre, I did think for a time that I would escape the seemingly obligatory anti-gay jokes. No such luck. I should have gone to Gnomeo and Juliet. Rated PG-13 for frequent crude and sexual content, partial nudity, brief drug references and language. 116m. At the Broadway, Mill Creek, the Minor and the Fortuna.

UNKNOWN. Thriller starring Liam Neeson as Dr. Martin Harris, who emerges from a coma after an auto accident and finds that his wife (January Jones, Mad Men) doesn't know who he is, another dude (Aidan Quinn) has taken over his identity, and assassins are out to kill him. Can he take back his life? Maybe his cab driver (Diane Kruger) can help. 109m. Rated PG-13 for some intense sequences of violence and action, and brief sexual content. Opening at the Broadway, Mill Creek, the Minor and the Fortuna.

I AM NUMBER FOUR. Based on a popular teen sc-fi novel by Pittacus Lore about good young aliens living on Earth, on the run from evil aliens out to kill them. As alien Number Four (Alex Pettyfer), aka John Smith, tries to fit in in high school, he's discovering his super powers. Produced by Michael Bay and Steven Spielberg with a big budget, the film is directed by D. J. Caruso (Disturbia, Eagle Eye). 104m. Rated PG-13 for intense sequences of violence and action, and for brief language. Opening at the Broadway, Fortuna and Mill Creek

BIG MOMMAS: LIKE FATHER, LIKE SON. Third in the cross-dressing crime comedy franchise finds FBI agent Malcolm Turner (Martin Lawrence) once again undercover as "Big Momma," trying to keep his teen stepson Trent (Brandon T. Jackson) out of harm's way after he witnesses a murder. Rated PG-13 for some sexual humor and brief violence. Opening at the Broadway and Mill Creek.

Sunday the ATL has Indiana Jones and the Temple of Doom, second in the Steven Spielberg/Harrison Ford swashbuckling archaeologist adventure series.

Next Wednesday's ATL Sci-Fi Pint and Pizza Night features a couple of German expressionist films: Fritz Lang's classic silent film Metropolis, with its examination off the dysfunctional relationship between workers and capitalist bosses set in a dystopian future city, is paired with Georg Wilhelm Pabst's The Mistress of Atlantis with Brigitte Helm (who also shows up in Metropolis) as the beautiful but dangerous Queen of Atlantis who lures men into her kingdom below the desert.

The Temple Beth El's "Welcoming Synagogue" series on inclusion and diversity continues Saturday night with Hineini: Coming Out in Jewish High School about one student's effort to establish a gay-straight alliance at a Jewish high school in the Boston area.

South Dakota-based environmental justice filmmaker Teresa Konechne is at Humboldt State next week. A number of her films, short and otherwise, will be screened on campus Tuesday and Wednesday. See story in this week's Calendar for full details.

GNOMEO AND JULIET. Yup. Romeo and Juliet, only with garden gnomes. Yup. Rated G. 84m. At the Broadway, Fortuna and Mill Creek.
THE GREEN HORNET. Charlie says: "It is surely the worst superhero movie ever." Rated PG-13. 119m. At the Broadway.

THE KING'S SPEECH. Based on the true story of the Queen of England's dad and his remarkable friendship with a maverick Australian speech therapist. Colin Firth can taste that Oscar. Rated R. 119m. At the Broadway and Mill Creek.

NO STRINGS ATTACHED. Let's have sex. Rated R. 108m. At the Broadway.

THE ROOMMATE. Thriller where the roommate does worse than drink the last of the milk. Rated PG-13. 92m. At the Broadway.

SANCTUM. A team of underwater cave divers get more than they bargained for. Rated R. 109m. At the Broadway and Fortuna.

TRUE GRIT. The Dude conjures The Duke in the Coen Brother's latest. You decide who's Grittiest. Rated PG-13. 110m. At the Broadway.