Eureka, Archimedes and the Golden Crown 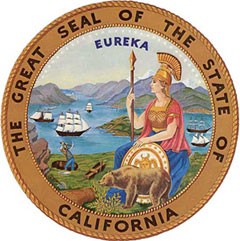 Have you ever wondered why the name of our county seat appears right there on the state seal? (In fact, it's the state motto.) And speaking of Eureka, what's that about Archimedes running naked around the streets of Syracuse yelling the name of Humboldt's largest city?

Archimedes was the greatest mathematician of the ancient world. For instance, he's credited with inventing the precursor of integral calculus ("infinitesimals"), anticipating the work of Newton and Euler by two thousand years. He lived in the Greek city-state of Syracuse, on the east coast of Sicily, from about 287 to 212 B.C. He's also known for all manner of inventions, such as the "Archimedes screw," a helical device still used to pump water.

Ironically, he's probably best known for an occurrence that probably never happened. The legend is that King Hiero II of Syracuse worried that a dishonest goldsmith had adultered a supposedly pure gold crown with silver. How to find out the truth, without damaging the crown? Archimedes' insight -- which supposedly prompted his au naturel hollering, "Eureka!" ("I've got it!") around his home town -- came as he was getting into his bath tub: the water rose by the same volume that his body occupied. Do the same thing with the crown -- that is, dunk it in water and measure how much the water rises -- and you've got the crown's volume. Knowing its weight, you can now figure out the crown's density. Since gold is about twice the density of silver, that'll tell you if it's pure gold or not.

It really wouldn't work that way -- the ancient Greeks couldn't measure to the required degree of accuracy. In fact the whole story is suspect -- folks would have figured the obvious volume trick long before Archimedes came along. But the story stuck, and the phrase got embedded in California history with the January 1848 discovery of gold at Sutter's Mill. What better shorthand for a miner's success than "I've got it!" -- and in just in one word, "Eureka"? From there, it was a short leap for the word to be included in the Great Seal of California at the California Constitutional Convention in Monterey in 1849.

A year later, optimistically hoping that the Trinity River area would match the success of the forty-niners' gold fields, early settlers chose the name "Eureka" for the first port on Humboldt Bay. Which is why I live in a place corresponding to the first person singular perfect indicative active of a Greek verb.

Barry Evans (barryevans9@yahoo.com) is a recovering civil engineer living in Eureka's beautiful Old Town. His book "Everyday Wonders: Encounters with the Astonishing World around Us" led to a four-year stint as a science commentator on National Public Radio.