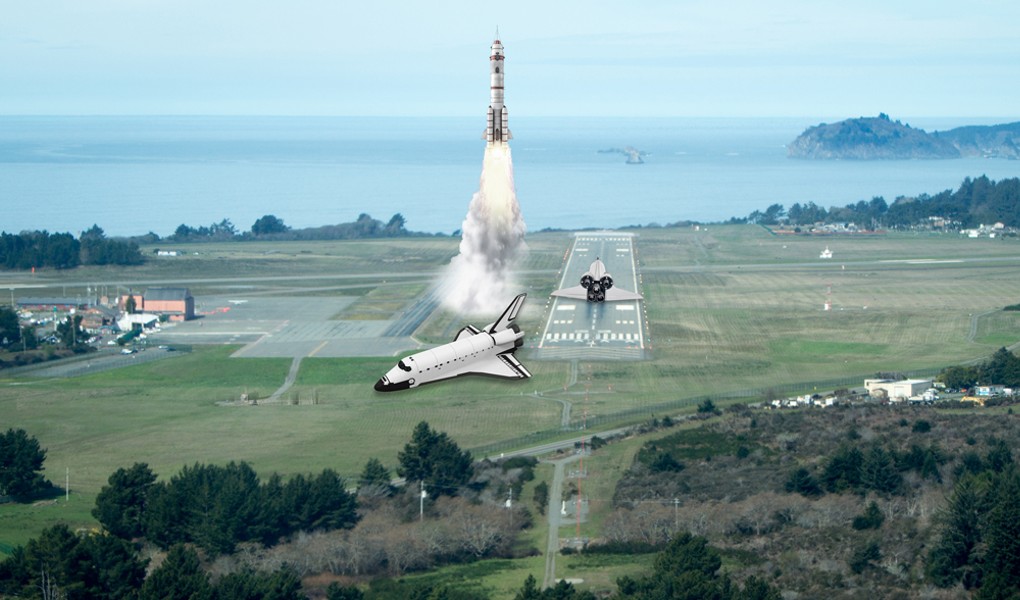 In an effort to draw new businesses and industries into Eureka, the city is taking a giant leap with the so-called "Moonshot" program, the basic premise of which is thinking big — really big — when it comes to drumming up interest.

The idea is to set aside possible limitations and start "shooting for the moon" in a bid to bolster the seaside town's prosperity, according to Economic Development Commissioner Jon O'Conner, who recently presented the concept to the Eureka City Council.

In his introduction, O'Conner noted how in May of 1961 President John F. Kennedy announced the goal of landing a man on the moon despite the lack of technology to make that happen at the time.

Eight years later, history was made with a lunar landing and O'Conner said the EDC's "Moonshot" program subcommittee is proposing to take a similar tact in promoting Eureka.

To illustrate the level of outside-of-the-box thinking the subcommittee is looking at, O'Conner used the airport as a hypothetical example during a Dec. 3 presentation to the council, saying a typical proposal might be to bring in an additional carrier to service the region.

A "moonshot goal," he explained during the presentation, could be to invite major players in the private space industry to look at opening a space port in Humboldt by sending out letters and then writing up press releases in a bid to garner widespread media attention."

Those publicity messages would include an explainer about Eureka that could highlight the city's outdoor opportunities, affordable housing, lack of traffic and thriving art scene, among other positive attributes.

"We are trying to help the economic prosperity of the city," O'Connor said, noting Eureka has only concentrated on retaining business, not attracting new ones.

O'Conner told the council that the results of such an all-out effort could bring increased economic gains even if the initial concept never came to fruition — such as two additional carriers and two new restaurants coming on board at the airport, which wouldn't become a space port but another sort of tourist destination with a drone start-up operating on one side of the facility.

Another possibility would be pitching the region as a "bad weather" testing site for small rockets, with O'Conner saying, "the hope is we'd stimulate interest in Eureka."

While most of the examples O'Conner provided to the council were tech-based, one was decidedly not — the idea to have Eureka become the second city in the state to create a Universal Basic Income pilot program.

He said this could include, for example, raising money via the private sector and giving residents $500 gift cards each month and partnering with a research organization to track the spending.

"Stockton did this and it works," O'Connor said, noting the Central Valley city received a great deal of positive media attention from out-of-area press.

It should be noted that Stockton is halfway through an 18-month program that provides $500 a month to 125 people from low-income ZIP codes who applied to be part of the pilot.

According to a story in The California Dream series — a statewide media collaboration of CalMatters, KPBS, KPCC, KQED and Capital Public Radio with support from the Corporation for Public Broadcasting and the James Irvine Foundation — the first report on where the money was spent was recently released.

That report showed, according to the story, about 40 percent of purchases were food, 24 percent went to home goods and clothing, and 11 percent paid for utilities. But another 40 percent of the money became untraceable after being cashed in or deposited into recipients' savings or checking accounts.

On the national level, Democratic presidential hopeful Andrew Yang has floated the idea of providing every American — regardless of income — $1,000 a month. According to the California Dream story, experts have called that a costly endeavor, adding up to roughly $3 trillion per year, or 75 percent of total current federal spending.

From there, the commission would decide whether to send the proposals along to the city manager and city attorney for another level of scrutiny.

At any point in this process O'Conner noted, an idea could be nixed. The subcommittee will also be taking public suggestions, with the hopes of hosting a workshop in the early portion of 2020 to "brainstorm."

Once a proposal is given the all-clear, a city staff member would pen a letter to a particular business, agency or individual outlining the approved pitch, which would be signed by the city manager and mayor. An accompanying press release would be composed and sent out to promote the idea.

"Although the press releases will be specific to the Moonshot idea being promoted, the EDC feels the larger message is that Eureka is open for business and willing to take creative and calculated risks to develop the future," the council's staff report states.

Several councilmembers expressed some concern about having proposals sent out into the world without their review or input, which O'Conner noted was part of an effort to avoid taxing the city staff and council's time.

While, in the end, Councilmember Leslie Castellano said she was willing to give the idea a go, she continued to voice some concerns about a shortage of public access to the process.

She also expressed reservations, as did others on the council, about the possibility of a controversial pitch making it out the door, saying she felt a responsibility to consider "what could go wrong."

"People on the committee," Castellano said, "have a lot of seasoning ... (in) how the idea pot is flavored."

O'Connor noted that was the reason for so many "gatekeepers" to have "ideas scrutinized" but keeping staff time to a minimum while still providing safety valves to stop a proposal in its tracks at any point in the process.

Councilmember Heidi Messner said she believed "big ideas are important" but was interested in being kept in some sort of "communication loop," something echoed by several other members.

At different points, it was suggested that the letters could be part of the council's consent calendar or the city manager reports, but that led to concerns about ruining the "big reveal" aspect of the Moonshot idea.

City Manager Greg Sparks, who is retiring this month, said he thought that could be handled by whomever sat in his chair, giving the councilmembers a heads up if something that might be controversial was coming down the pike in individual meetings.

In the end, the trepidation was mild and the council embraced the idea, giving the go-ahead for the program and the proposed process for sending out pitches and promoting them.

"I love this idea," Councilmember Natalie Arroyo said, noting that in her experience with community organizing, the most creative ideas often come about "when not thinking about constraints."

She expressed confidence that the process "would weed out anything that's, like, 'Whoa.'"

"I know that part of the joy is the element of surprise," Arroyo said.

"I'm looking forward to seeing what you bring forward," Bergel said, noting she appreciated the subcommittee getting public input on possible ideas. "I say, 'Go forward and be successful.'"

Kimberly Wear is the assistant editor at the Journal. She prefers she/her pronouns and can be reached at 442-1400, extension 321, or kim@northcoastjournal.com. Follow her on Twitter @kimberly_wear.