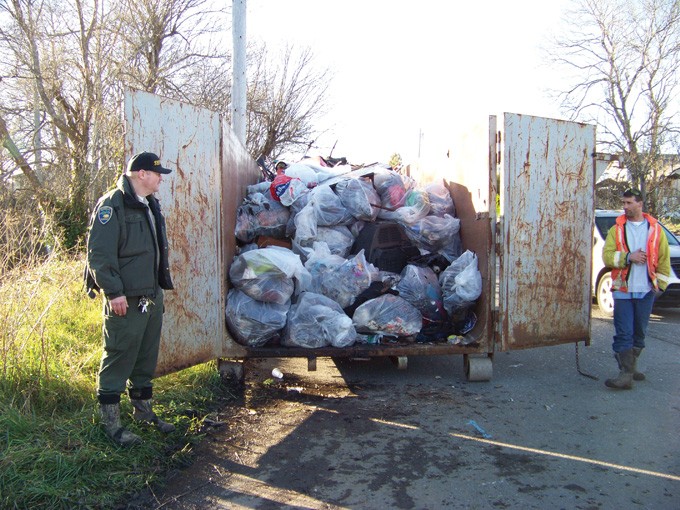 He trashes our marshes and can't stand to live among people. He steals shopping carts by the dozens, ties them together and circles them two-abreast like wagons about his mucky plein-air fortress. Drags home every sort of busted big-item implement -- computer monitors, lawn mowers, microwave ovens -- and all the lowly goods in between, stashes them in the carts and about the bushes. Takes a saw to the trees, leaving some as four-foot high skinny stumps and others in a precariously half-sawed state of girdled doom. He does not do drugs, as far as anyone can tell. But he does crap in a five-gallon bucket which, when it is full, he apparently empties an arm's toss from his tent. And, quite frequently, a thug or two comes along and beats the crap out of him.

This is the sad, infuriating, hands-in-the-air case of Herbert Bruner, 49: one of Eureka's rare, but very visible, homeless hoarders.

Bruner wasn't home last Friday, Jan. 7, when Humboldt County Senior Correctional Officer Trent Hauger and a 19-member jail inmate crew arrived at 9 a.m. to muck out the sizable, fetid junk heap he's been constructing for the past year in the triangle of marsh between Myrtle Avenue and 6th Street. The week before, on New Year's Eve, Bruner had been jumped by two guys who cracked his head open with a chunk of wood and stole his backpack. Bruner was flown to Davis for treatment, and the next day the Eureka police apprehended two suspects: 18-year-old Tyler Trujillo, of Eureka, was arrested for attempted murder and robbery, while the 17-year-old was released to his guardian.

All day long on Friday, the inmates trundled wheelbarrows up and down the skinny mud path leading from 6th Street to Bruner's camp in the flat clearing amid the marshy trees and shrubs, where, inexplicably, one big tree was festooned up to its highest branches with rained-on shreds of toilet paper. Perhaps Bruner did that, or maybe one of his tormentors. Around 3:30 p.m. they had filled up two 40-yard dumpsters and loaded nine red Target shopping carts into the long trailer hitched to the Sheriff's van. Four shopping carts from other stores were lined up on the side of the road. Hauger said they had gotten most of the stuff; the rest, afloat in mud-sucking hip-high tidal water, they'd have to get the next day.

"Can you call it 'Shoveling doo-doo against the tide'?" called out one of the inmates, seeing a reporter talking to Hauger. "The tide came up before we could get the crap out, and by then we were dealing with human feces."

Hauger and the inmates began a litany of what they'd hauled out of the camp: 13 working shopping carts, five or six broken shopping carts, wood pallets, lots of books and magazines, bicycles, TVs, lawnmowers, microwaves, nine computer monitors, and on and on.

"It was horrible," said an inmate. "I go to Watts all the time and I've never seen anything like this."

"I grew up in Chicago, and this is the most messed-up shit I've seen in my life," said another. "He had a bucket of feces two feet from his tent. I'm doing half a year for less heinous crimes than this."

Then, seeing a camera pointing at the junk, they all clambered onto the trailer in front of one of the loaded dumpsters, and one called out, "OK, everybody, flex!" and they all laughed as they bunched their fists together.

OK, so they weren't supposed to be conversing with a reporter, turns out, nor posing for pictures. But Hauger noted that the minimum-security inmates, who were taking part in the Humboldt County Sheriff's Work Alternative Program (SWAP), felt good about what they'd accomplished. And one of the guys said he'd like to be in the paper, for a change, for doing something good.

But what of our man, Bruner?

On Monday, Eureka Police Lt. Murl Harpham said he had arrested Bruner a couple of times in the past for felony grand theft shopping cart -- once at the Myrtle camp (for 28 carts), and another time in Cooper Gulch. One time, Harpham said, his team recovered 64 shopping carts, mostly of Grocery Outlet vintage, from a camp that Bruner had made in Palco Marsh. Bruner wasn't there at the time. Another time, in Mauer Marsh (next to Palco Marsh), Harpham counted 45 carts.

"He was there that time," said Harpham. "And I told him I would not arrest him if he put the carts in the parking lot of Sears so that the stores they belonged to could come pick ’em up. Uh, I went there the next morning, and there wasn't a shopping cart to be found. And they weren't in his camp. But I followed these little wheel marks, and they were about 150 yards away back in another part of Mauer Marsh, way back in the brush. He must have spent all night wheeling those carts there. And they all had stuff in ’em: computer monitors, toaster ovens, microwaves. One time we counted 13 microwaves in one of his camps."

Harpham said Bruner's the second homeless hoarder he's encountered in Eureka. Of course, there are lots of them living indoors. In fact, Bruner's been one of those, too, off and on.

"He doesn't have to live in camps," Harpham said. "Because he's got money, and he's under conservatorship, under a public guardian. But he doesn't like to be around people. He likes to camp out. And he can't hoard stuff indoors. The public guardians have placed him in four homes since I've known him, and he ends up upsetting the people because he tries to bring shopping carts into his room, and he buys meat and shoves it under the mattress and forgets about it and it starts stinking the place up. And every time they put him somewhere, he leaves."

Harpham has cited Bruner numerous times for littering and illegal camping. But those, and the arrests, don't seem to amount to much.

"I was hoping to get him into the system so he could be on probation and get some help," Harpham said. "I was hoping somebody would take charge of the situation, and he could get some counseling. But he probably wouldn't be willing. I talked to his public guardian, and they said their hands are tied. He won't listen to them. And the courts have ruled he has enough mental capabilities to live on his own. And he does fine on his own -- except he gets beat up all the time, and he makes a huge mess wherever he goes."

Bruner actually got back to Eureka last Thursday afternoon, the day before the SWAP crew mucked out his camp. He had ridden the bus home from Davis and headed straight to his camp, which is where Harpham found him hiding.

"He had his head still wrapped up," said Harpham. "So I called his public guardian, and they came and put him up in a motel for a week. And I stood there and lectured him a good 10 minutes before he left. I said, 'This is no way to live. This is dangerous.' I told him I didn't want to have to come down there and carry his dead body out of there. I said to him, 'Each time they beat you up, it's gotten worse. This time, they almost killed you.' I says, 'Next time they're liable to.' I told him he needed to stay away from there. It's not a safe place to be. That he's got the money to live in a nice warm room. And he stands there and he agrees with me. And then he insists on going back to his camp. 'I love that place,' he says, 'I love that camp.'"