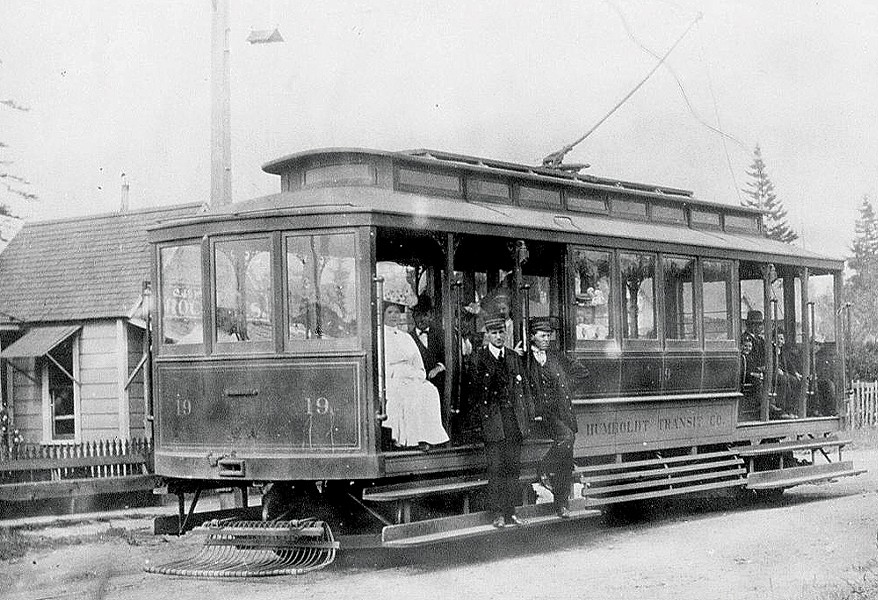 Courtesy of Josh Buck Collection Humboldt Transit Car Number 19. Can anyone identify where this photo was taken?

The good old days in Eureka, I've heard, were the 1920s and 1930s, when a family could enjoy a Sunday excursion by streetcar from Old Town to Sequoia Park. There, they could enjoy a picnic next to the duck pond before riding home, rattling down the tracks on long summer evenings. Eureka's streetcars had been around long before the inter-war years, however, and their history can be conveniently divided into two periods: horse-powered and electric-powered, with a six-year hiatus between.

The Eureka Street Railroad Co., chartered in 1887, made its first run on the evening of August 20, 1888, when a horse-drawn car made the trip from 2nd and A (near present-day Living Styles) to Myrtle Avenue via Second, E and Fifth Streets. Within four years, the company laid 4 1/2 miles of track to Broadway and Wabash and to Myrtle Avenue, with spurs on California, E and H Streets as far south as Trinity Street.

The venture was short lived. After the company's President and General Manager, Richard Fernald, died in 1897, the full extent of the company's dire financial situation became apparent. Within weeks, service stopped and the company's cars were sold, along with the 15 long-suffering horses that had hauled them.

For nearly four decades, electric streetcars, powered from a single overhead wire, regularly ran the length and breadth of Eureka along 13 miles of track from 6:30 a.m. to 11:30 p.m.. From the depot at Second and A streets, routes included: Broadway to Bucksport; Myrtle Avenue to Harrison Avenue; California Street to Harris Street; E and J streets south to Harris Street, thence east along Harris and Hodgson streets to Sequoia Park. Planned extensions to Arcata and Ferndale never materialized.

For several years, the streetcar service ran at a loss, which the company covered with profits from its lucrative oil business. At its peak, they were selling 150,000 barrels of fuel oil annually, bought cheaply at wholesale prices. After losing its oil contract in 1915, the company's future was untenable. It struggled along until 1921, when it sold its property to the city of Eureka.

In his booklet Street Railways of Eureka (published by The Western Railroader in 1964, available at the County Library), Stanley Borden reported the city took over the company's 13 passenger cars, along with the tracks, electric overhead wiring, transformers and switching gear. For another 19 years, "the railway served Eureka faithfully with good service," according to Borden. However, private automobile traffic began cutting into the railway's passenger traffic, and by 1939 the system was losing between $10,000 and $20,000 a year, leading to a special election on the future of the streetcars in November of that year. The outcome, 4,933 to 2,597 votes, was to end the whole venture.

The last regular streetcar run was on Feb. 20, 1940, with a ceremonial public bonfire of Car No. 18 on Fifth Street four days later: "The fire got so hot that it scorched some of the buildings and the Fire Department had to put it out," wrote Borden.

Such was the ignominious end of Eureka's street railway transit system.

Barry Evans (he/him, barryevans9@yahoo.com) rides the Timber Heritage Association's "speeder" most any chance he gets.