Every Agate Hunter for Themselves 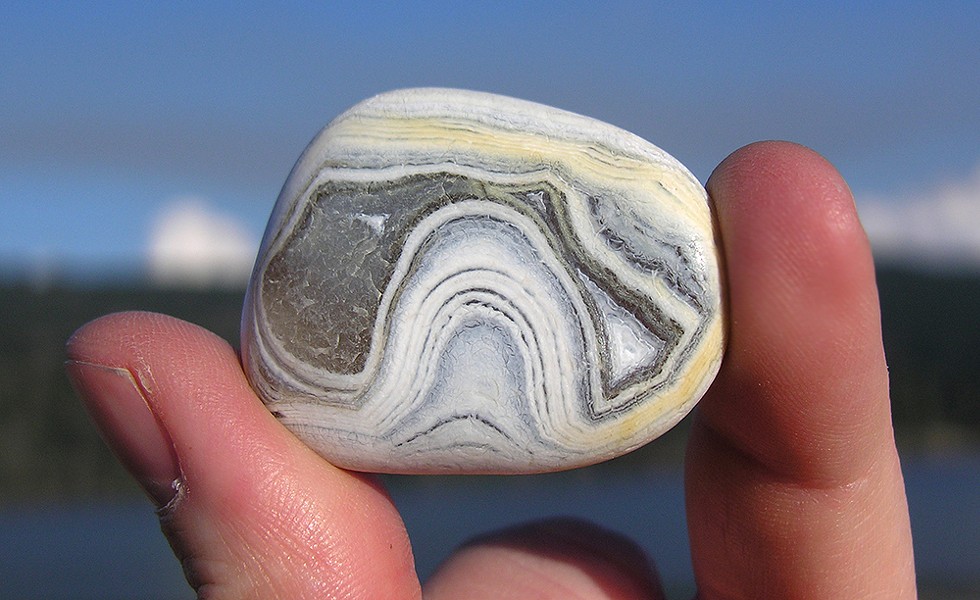 Photo by Mike Kelly An agate in natural light. 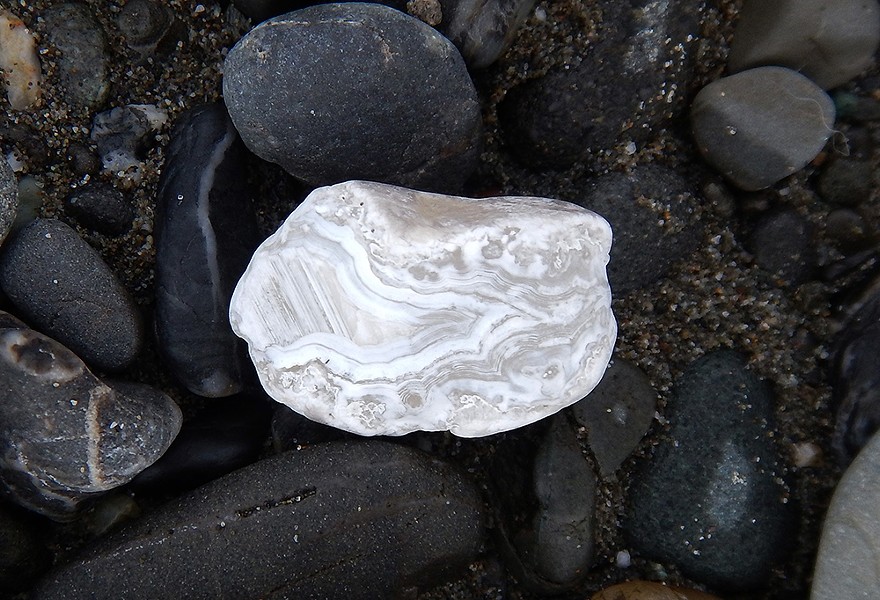 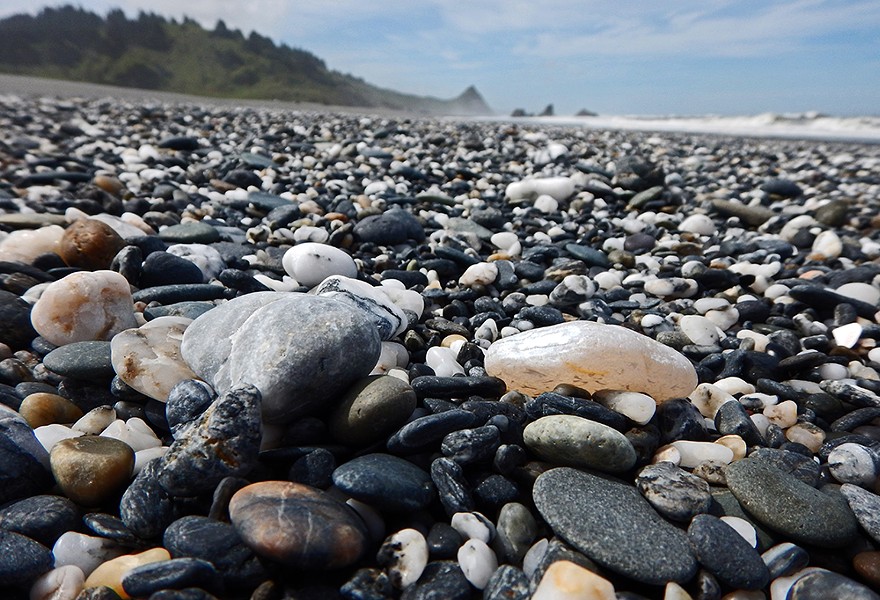 Photo by Mike Kelly A gravel bed worth defending. 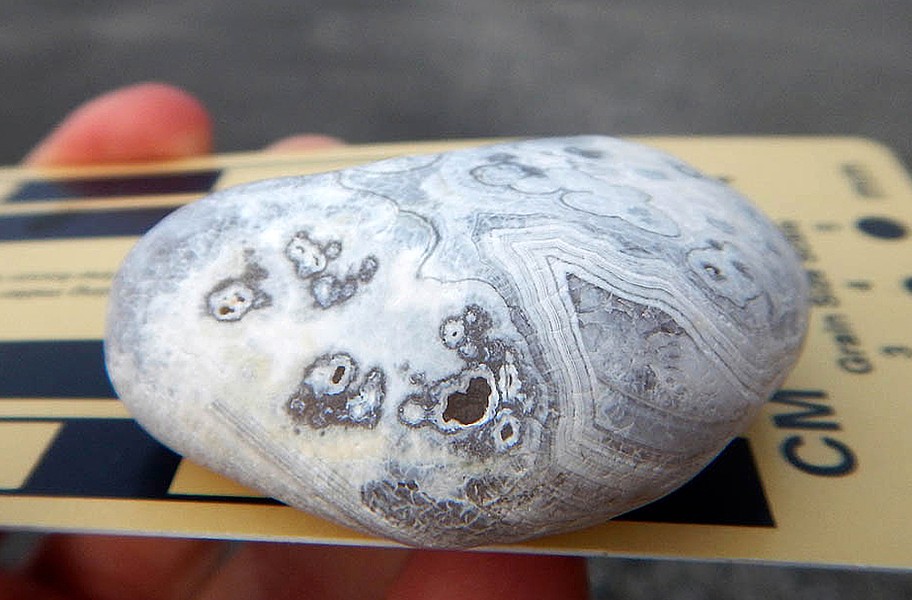 Photo by Mike Kelly A find at Agate Beach. 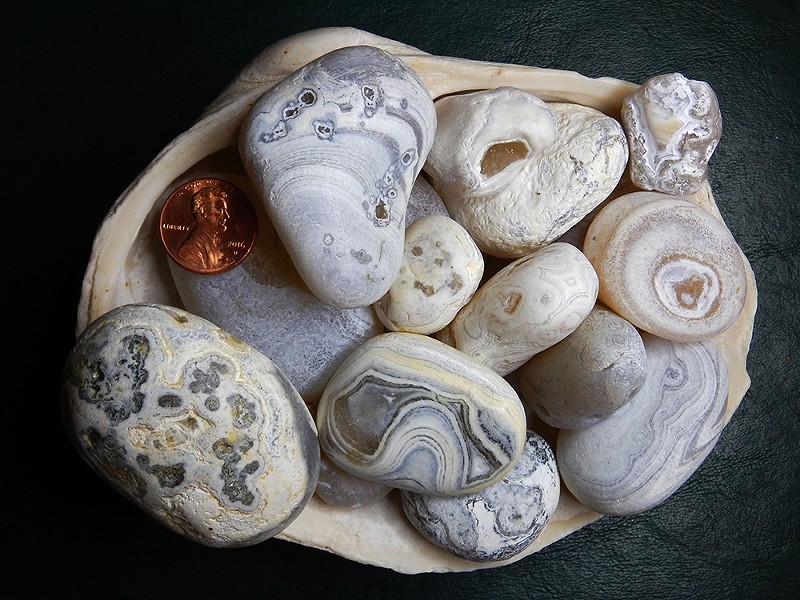 Photo by Mike Kelly A selection of Humboldt agates. 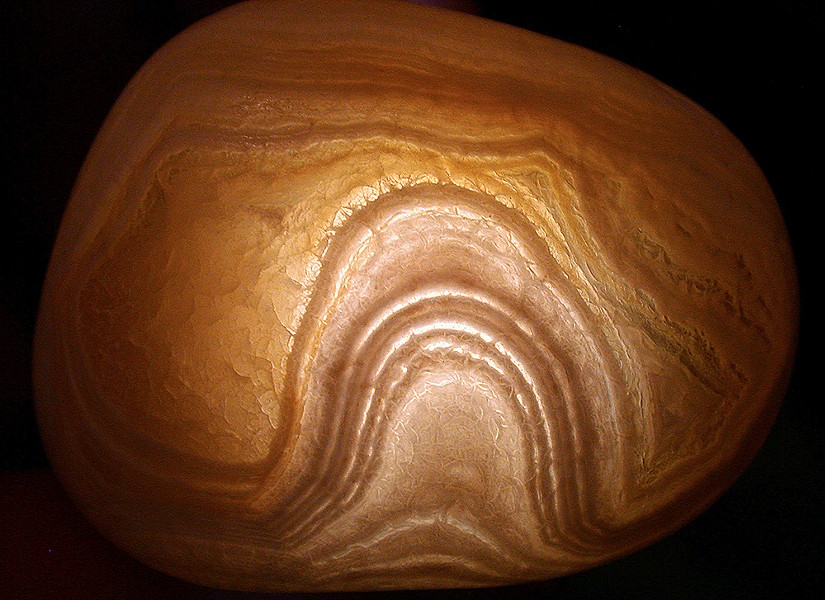 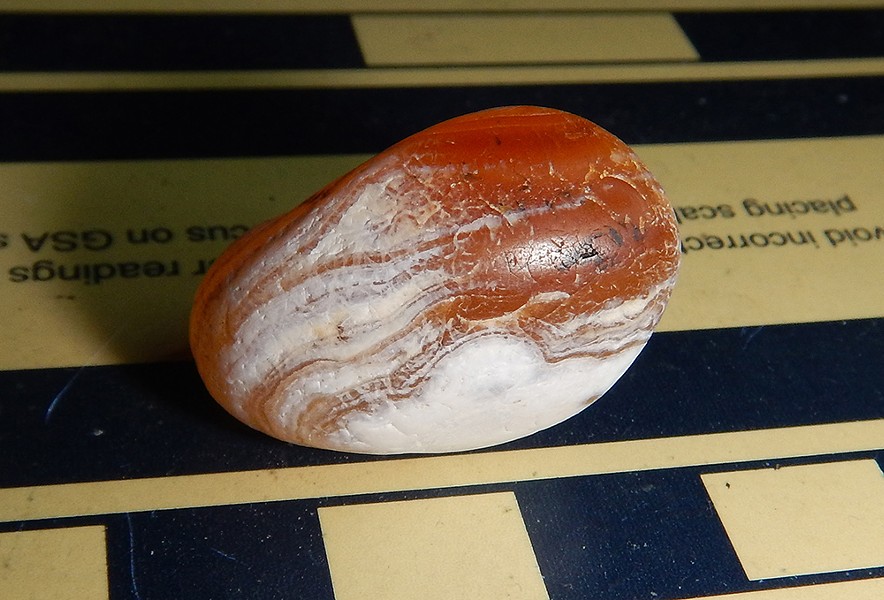 I don't usually advocate violence. But beachcombing for agates is one of my exceptions.

Use the following info and tips to get an edge on the retirees and their horrible grandchildren who dominate agate collecting. You may get life in prison, but it's worth it because agates are super cool.

Most rounded beach agates formed when groundwater-dissolved silicon dioxide (SiO2 or quartz) is deposited over millions of years within gas bubbles left in solidified basaltic lava. But agates can form in any underground cavity. In fact, agatized fossil clams and snails occur in some places so keep an eye out.

Your typical California agate eventually weathered out of the host rock and got deposited somewhere. It may have rolled down a river, been uplifted by a bunch of earthquakes, eroded out of a cliff, tumbled in the surf and then washed up just for you.

You can find an agate on almost any local beach but the closer you are to Agate Beach, the better your chances. Duh. I've heard people call our local Humboldt variety "milk agates" and, indeed, most of them are white, but they can also be yellow, gray or, in rare cases, orange. But what our agates lack in color, they often make up for with beautiful banding.

So how do agates get those distinctive bands? Apparently, nobody really knows. One hypothesis is that a thin layer of silica is deposited and changes the cavity's surface conditions. This causes the next layer to be laid down differently, which alters the surface for the next layer, and on and on.

Our local gates often have a silica "frosting" that makes them appear opaque and accentuates the bands. However, even when they appear opaque, agates are characteristically translucent. This makes them easier to spot when the sun is at a good angle. The quartz crystals are so tiny and ordered that their surfaces don't interfere much with light and it passes through efficiently.

By contrast, an ordinary un-banded white beach pebble is made up of the same mineral but, having formed in a different environment, the quartz crystals are bigger and less orderly. So they pass much less light, if any at all. Don't be fooled.

Anyway, for a successful agate hunt you'll first need a gravel bed, which you will then need to defend. For example, when someone approaches, run to the gravel perimeter and bark. Or, if you are a cat person, go, "Fffff-t!" and show your claws. I've even witnessed a cow person "moo" the competition away.

If this fails, remember that you have rocks and the other person only has sand. I wear goggles and carry a slingshot. Just make sure you don't accidentally shoot an agate at someone or you may never get it back.

Slingshots are no joke. If yours accidentally kills someone, mount his or her head on a pike and stick it at the edge of your gravel bed. If people approach from both directions, you may need to accidentally kill again. Because, of course, two heads are better than one.

You'll have to move quickly. Begin by searching that portion of the gravel bed with the chunkier rounded rocks. This is where agates will tend to sort. Skip the skipping stone zone for now.

Some people like to polish agates to a mirror-like shine in a rock tumbler. But be careful not to over polish them or you might lose the frosted bands. I prefer the natural texture right from the beach.

And finally, a word on safety: Watch the surf so you don't get washed away. And definitely watch out for me.