Every Sperm Is Sacred 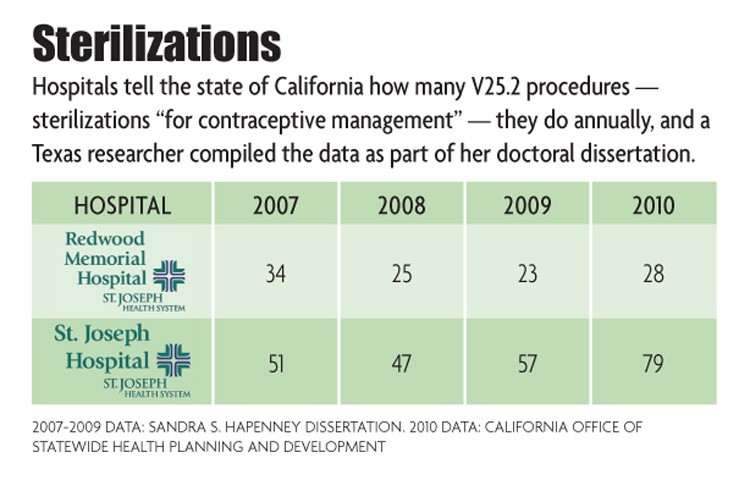 Pregnant women who want their tubes tied after delivery could soon find that their hospital options have dropped sharply.

Both St. Joseph and Redwood Memorial could put a halt to such elective sterilizations, which -- depending on whom you ask -- violate the teachings of the Catholic Church.

That would leave just Mad River Hospital as the only place in coastal Humboldt where a woman could have her baby and then get surgical help to prevent future pregnancies.

Especially after Caesarean-section deliveries, when the woman wants no more children, "it's very common if you're in there anyway that you just do the tubal ligation," said Dr. Kim Ervin, a gynecologist who owns Northcoast Women's Health.

Even after a vaginal birth, it's an optimal time for that choice: the uterus is still enlarged, making access easier, and the woman is already in the hospital.

Between 45 and 60 women a month give birth at St. Joseph hospital, Ervin said, and forbidding tubal ligations could drive some of them away just when the hospital is struggling financially.

Ervin says that she and many other gynecologists in the region practice at both Mad River and St. Joe's. But if the impending changes also tighten up on hysterectomies, she said, she may stop working at the Catholic hospital.

So far, the local hospital board has only asked a subcommittee to look into bringing its women's health policies in line with the rest of the 14-hospital system, according to Dr. Christopher Cody, medical chief of staff at St. Joe's.

But there are strong hints that change is coming:

Earlier this month, the Napa Valley Register reported that the Queen of the Valley Medical Center, another hospital run by the Sisters of St. Joseph of Orange, will crack down on tubal ligations. The newspaper quoted Sister Marian Schubert as saying that the sisters want to impose "one universal policy" that applies to all hospitals.

And Brian Greene, executive director of media relations for the Orange-County-based chain, told the North Coast Journal that a new policy banning tubal ligations, imposed in "the last month or so," will apply to all 14 hospitals.

He said the policy has been "updated and clarified," partly because it is now easier to do sterilizations in a doctor's office. (That procedure, called "Essure," involves threading in a device that irritates the lining of fallopian tubes, making them scar closed in a few months. In Humboldt, Planned Parenthood contracts with Ervin to offer such sterilizations once a month.)

For pregnant women, though, opting for Essure after delivery leaves a much longer window of fertility. First, they would be advised to wait several months after delivery before having the in-office Essure procedure done, and then they'd have to wait roughly three months more for it to be effective.

For years, Catholic hospitals all over the country have varied widely in their interpretations of the church's ban on sterilization, according to Sandra Hapenney, who teaches epidemiology at Baylor University in Texas.

The trouble, Hapenney said in a telephone interview, is that such variation is politically risky for Catholic hospitals. If they don't begin following the clear directives from the U.S. Conference of Catholic Bishops, she said, they could jeopardize their protection under "conscience clause" laws. Catholic hospitals now rely on such laws to refuse to provide abortions and some other women's health services.

Hapenney already had a master's degree in public health when she began delving into medical records for her doctoral dissertation. She pulled data from seven different states, which require hospitals to submit records indicating what they've done, using standard medical codes. Hapenney zeroed in on one code "V25.2," which specifically refers to sterilization "for contraceptive management."

St. Joseph Hospital in Eureka did roughly 50 of those each year from 2007-09, the time frame Hapenney analyzed, and doctors at Redwood Memorial averaged around 27 a year.

The sterilizations continued in 2010, according to the California Office of Statewide Health Planning and Development: 28 at Redwood Memorial and 79 at St. Joe's.

Ervin said that at St. Joe's, doctors whose patients wanted their tubes tied have been required to fill out paperwork saying that the woman's physical or psychological heath would be endangered by a future pregnancy.

Hapenney, a Catholic who also teaches theology at a Catholic high school, can point to the exact footnote in the U.S. bishops' "Ethical and Religious Directives for Catholic Health Care Services" which has said -- since 1993 -- that sterilizations cannot be done to prevent a future pregnancy, even if that pregnancy could put the woman's life in danger, because it is not a current condition that needs treatment. Only "indirect" sterilizations, such as when doctors remove a cancerous uterus, are permitted.

No matter what they say publicly, though, many Catholic hospitals clearly interpret those rules differently, Hapenney said, because the sterilization data doesn't lie.

Of the 176 hospitals she studied, just under half of them -- 85 -- allowed doctors to perform "V25.2" sterilizations. In California, doctors did such sterilizations at nearly 70 percent of the Catholic hospitals.

While the spokesman for the St. Joseph chain claimed there were inaccuracies in Hapenney's work, including occasionally characterizing the treatment of an ectopic pregnancy as a sterilization, he made the assertions only via e-mail and declined to make anyone available for an interview about the specifics. He also declined any comment on the state's data on the two Catholic hospitals in Humboldt, which showed continuing sterilizations in 2010.

The Catholic Medical Association's Journal, Linacre Quarterly, is preparing to publish an article by Hapenney about her findings.

Meanwhile, gynecologists and obstetricians in Humboldt are waiting to find out what the two Catholic hospitals here will do next.