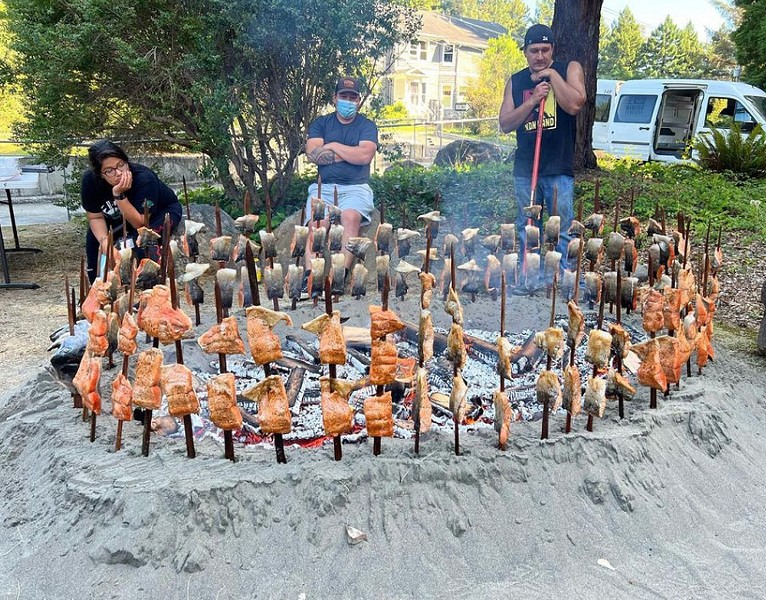 The link between teaching young Native people to process and cook acorns and addressing substance abuse in their communities might not be readily apparent, but the folks at Cal Poly Humboldt's Rou Dalagurr Indigenous Food Sovereignty Lab know it's there. Now the lab, born from a class project and community fundraising, is central to the Indigenous Futures Program and Traditional Ecological Knowledges Institute's $1 million grant from the Elevate Youth California: Youth Substance Use Disorder Prevention Program.

Research assistant for the lab Karley Rojas explains, "The reason why substance abuse is so high in Native communities is colonization and the forced separation from Native communities and their traditional foodways," she says, adding that "creates a huge void." Before the arrival of white settlers, the Karuk, she notes, would eat 450 pounds of salmon per person per year. Salmon is viewed not only as a food staple, but as a relative fundamental to the spiritual, physical and mental health of Native people, not just in terms of the sustenance from consuming the fish, but caring for the land and the rivers. Through the damming of rivers and criminalizing fishing, settler colonialism forcibly disconnects Native people from their foodways. "Trying to fit in a world that doesn't support [those cultural practices] contributes to substance abuse."

Lab Co-Director and Native American Studies Department Chair Cutcha Risling Baldy (who is an occasional contributor to the Journal) has witnessed the impact of cultural food practices on Native youth in her work on the Acorn Wellness Program, a five-year study with Two Feathers Native American Family Services funded by the California Department of Public Health. "What I've seen is [youth] understand the connection between not just physical wellness, but what it takes to be a healthy person," she says. "There's something really physical about engaging with food ... that helps them connect 1,000 years ago to today. ... It expands their understanding of their cultures."

With the grant funding, Risling Baldy and Kaitlin Reed, co-director of the lab and an assistant professor of Native American studies, are building a curriculum for the Food for Indigenous Futures Program based on needs the community, particularly young people, have voiced, including a health class that connects to local Native traditions, substance abuse intervention and youth camps. Funding will also cover necessary staffing, hosting youth at camp and classes, transportation and consulting experts. It will also support the Indigenous Food Festival in November, which will feature Native businesses, speakers and people sharing traditional foodways. The Rou Dalagurr (the Wiyot term for "everybody works/comes together") Food Sovereignty Lab is integral to those plans and Risling Baldy and Reed's study of the program's progress and outcomes.

In 2019, students Carrie Tully and Cody Henrickson worked on a group project for their Indigenous natural resources class that grew into the proposal for the lab. When their application for a space and resources to build the lab was initially rejected by the university senate, they dug through the bylaws to find an appeals process. The appeal came with more than 100 letters of support from the Humboldt community, including tribal leaders. While Cal Poly Humboldt eventually agreed to the space, it offered no funding, so students raised $250,000 to renovate a defunct café's interior to create a kitchen for gathering and teaching traditional foodways, as well as an outdoor space recently designated Wiyot Plaza, which includes a salmon pit. Including this most recent grant, the lab has raised upward of $1.5 million.

Rojas rattles off a list of harrowing statistics revealing what Native youth are up against in Humboldt, including that in our county, tribal reservation areas are ranked highest on the Intercity Hardship Index, which takes into account socioeconomic factors contributing to health disparities, like "alcohol and drug overdose and suicide." And in 2010, while Indigenous people made up 7 percent of Humboldt's population, they accounted for 20 percent of juvenile detention admissions, according to the Humboldt County Juvenile Probation Department.

Repairing the damage to Native communities through food makes sense to Risling Baldy, given how settler colonialism targeted foodways as a method of attack. "They go after the foods. They go after Indigenous foods," she says, explaining how the Bureau of Indian Affairs contemplated eradicating oak trees to destroy a food staple and its attending cultural practices. Teaching a new generation to process, cook and eat acorns is to pass on traditional ecological knowledge (TEK) and connect Native youth to the land, community and each other.

"It takes a full year, more or less, to process acorns," says Rojas. "TEK cannot be broken apart into pieces. And it cannot be separated from the place ... you cannot separate an acorn from the people that gather and the health of the trees and rivers and the salmon. ... You also can't separate the people from the land and expect the community to be healthy or the people to be healthy."

The reconnection to Native foods is powerful, says Risling Baldy.

"It took a lot of violence to separate us from our food practices," she says, adding work at the lab and in the Native Futures Program is the continuation of the ongoing resistance of Native people and an example for other communities of not only about how to care for each other and preserve foodways, but the environment as well. "If the question is, 'What are we supposed to do now,'" in terms of food, the environment and climate change, "that's really going to come from Indigenous knowledges."

The Food for Indigenous Futures Program, she says, is a chance to "show everyone what climate resilience is going to look like and what climate justice can be."

Jennifer Fumiko Cahill (she/her) is the arts and features editor at the Journal. Reach her at (707) 442-1400, extension 320, or jennifer@northcoastjournal.com. Follow her on Instagram @JFumikoCahill and on Mastodon @jenniferfumikocahill.