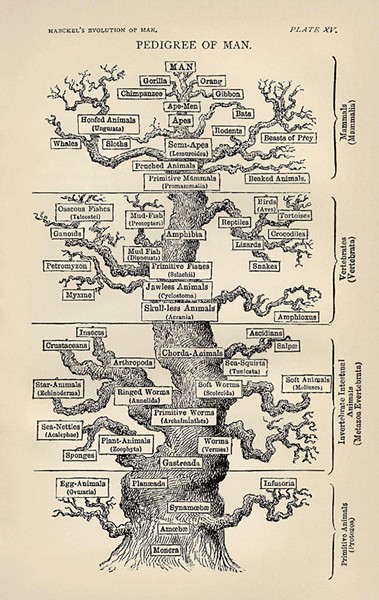 Public domain German zoologist Ernst Haeckel's "Tree of Life," from his 1879 book The Evolution of Man. Like most of his peers at the time, he considered humans the pinnacle of evolution.

Evolution is not progress: There's no goal, no purpose, no plan, no direction. Easy to say, hard to believe. We humans are the last to see the randomness of evolution because we think we're special. As the late anthropologist Ruth Benedict said, "Fish are the last to see the water." True, humans have qualities possessed by no other species. From our inevitable anthropocentric point of view, it may seem that skills such as technology, language, writing and the ability to survive in any climate (even the non-climate of space) make us the top dogs here on Earth. That's the message of the accompanying "Pedigree of Man" illustration from 1879, in which we occupy the spot usually reserved for the angel on top of the Christmas tree.

From an alien visitor's point of view, we are indeed special, if the exponential growth of our species' numbers and wholesale manipulation of the global environment count for anything. But maybe ETs would deem other qualities more important if they got around to comparing species. For instance:

Longevity: Compare our mere 200,000 years to that of ants, who have been unchanged for nearly 100 million years and who don't have the self-destructive tendencies we do.

Ecological balance: While we ravage our planet, other species maintain a rough equilibrium with their environment.

Co-existence: While other animals fight for resources or mates, they rarely kill. We go to war.

So if evolution isn't progress, what is it? It's the random process by which living organisms diversified from earlier forms. And it's dependent on three operations:

Heredity: Passing on genes via mitosis or sexual reproduction.

Variation: Random mutations when the reproductive process from one generation to the next isn't perfect.

Selection: "Survival of the fittest," that is, the largely non-random process by which those mutants better suited to their environment than their fellows have better reproductive success.

This can all be summed up on a T-shirt: "Life Results from the Non-Random Survival of Randomly Varying Replicators" (from biologist Richard Dawkins).

So nothing in how evolution works implies purpose or progress; instead it's opportunistic, moment-by-moment, day-by-day, year-by-year and generation-by-generation. There's no plan, no end goal. If you're unconvinced, consider what is sometimes termed the "de-evolution" of cetaceans. Some 50 million years ago, a hippopotamus-like creature (Pakicetus, perhaps) returned to the ocean from which its ancestors had emerged a couple of hundred million years earlier. Arms and legs morphed into the fins and vestigial hindlimbs in today's whales and dolphins. (The up-and-down motion of their tails belies their mammalian ancestry — fish swim side-to-side.) So where's the progress? Leaving the water? Returning to the water? Evolving limbs? Reabsorbing limbs?

If you really think the fact of our cetacean cousins losing their limbs is "de-evolution," you're still stuck with that "tree of life" model wherein each successive generation is an improvement on the previous one. Pakicetus returning to the ocean to become whales and dolphins is as much evolution as Homo erectus morphing into Homo sapiens. It's all non-directional evolution and it doesn't necessarily lead to greater complexity. Only when we see ourselves as special, as the pinnacle of nature's 4 billion years of experiments, are we stuck with the fallacious notion of "progress."

Next time, we'll look at "one of the most intriguing, and most misleading, drawings in the modern history of science."

Barry Evans (barryevans9@yahoo.com) is glad he won't be around when gene editing becomes commonplace. He prefers he/him pronouns. His newly published fifth compendium of these columns, Curse of Field Notes, is at Eureka Books, Booklegger and Northtown Books.