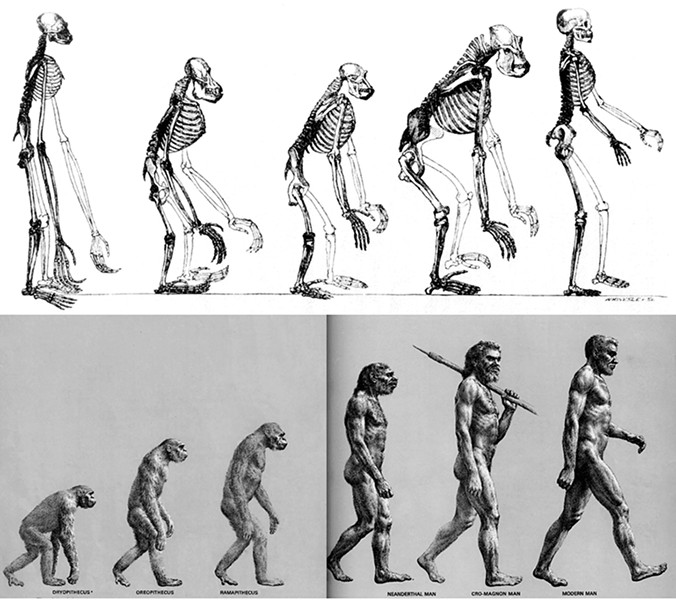 Above: When Thomas Huxley included this illustration in his Evidence as to Man's Place in Nature in 1863, he inadvertently gave us the template for an endless succession of "evolution = progress" T-shirts. Below: "The March of Progress" presents 25 million years of human evolution. This fallacious image was created for the Life Nature Library, published in 1965.

Last week, I discussed the fallacy of thinking of evolution as a progressive process, that is, simple to complex, "lower" to "higher" animals, culminating, of course, in humans. The theory, "orthogenesis," (from the Greek "straight origin") is the opposite of randomness. Orthogenesis presumes that the variation from one generation to the next is directed toward a fixed goal; the accompanying unscientific illustrations make the point succinctly.

"Directed" means different things to different people. For some, it's a purely mechanical process, while others see a sentient director behind evolution, either God or some mysterious, undefined "life force." If you're familiar with Teilard de Chardin's philosophy, think "Omega Point" as the ultimate goal.

Still others — 38 percent of Americans, according to a 2017 Gallup poll — skip evolution completely when it comes to humans, believing "God created humans in their present form at one time within the last 10,000 years." (Grasping for a silver lining: Five years earlier it was 46 percent.)

The seductive notion of evolutionary progress has persisted since Charles Darwin published Origin of Species in 1859. Even Darwin didn't totally accept evolution as a random, non-directed process, writing, "as natural selection works solely by and for the good of each being, all corporeal and mental endowments will tend to progress towards perfection." And starting with Thomas Huxley's ape-to-human template four years later (see illustration), we've been subjected to countless images that reinforce the notion of evolution as progress, including the accompanying image from the Life Nature Library. Or check out the multitudes of contemporary T-shirts depicting (starting image, left side) bacterium/fish/chimpanzee evolving into (ending image, right side) smartphone user/cyclist/Ironman.

No wonder the popular belief in evolutionary progress is "a persistent heresy," quoting zoologist Igor Popov. The sequence — from primitive something to advanced something — just looks so right. It's "one of the most intriguing, and most misleading, drawings in the modern history of science," according to writer Jennifer Tucker.

The mechanism of heredity has neither memory nor ability to see the future. That means there's no "tree of life" with humans at the top. (A better, but still imperfect, metaphor is that of a bush with many living twigs and many, many more extinct twigs.) Whether we're talking about original Darwinian evolution or the modern evolutionary synthesis of the 1940s that made biology a professional science, forget the T-shirt caricature. Evolution is (drum roll) a random process!

Barry Evans (barryevans9@yahoo.com) wonders why he still has to write about this. He prefers he/him pronouns.