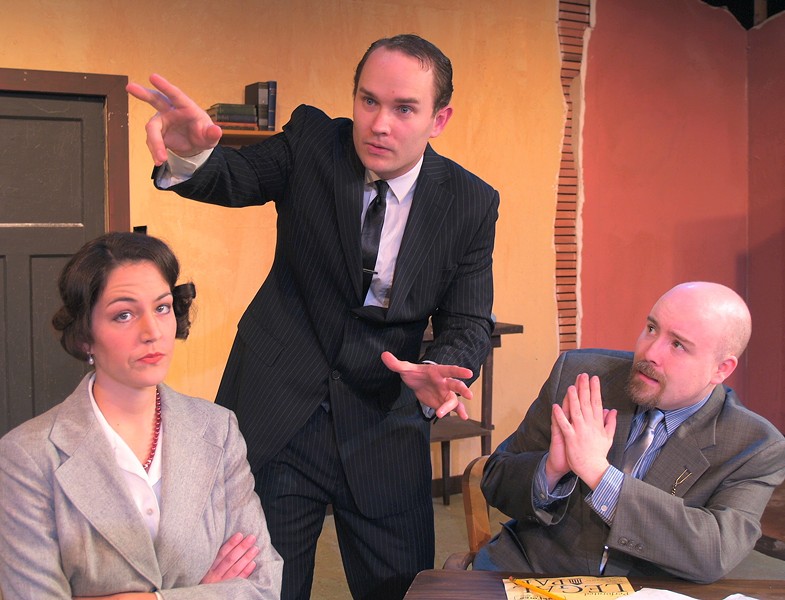 Laughter On The 23rd Floor, a comedy by Neil Simon now onstage at the North Coast Repertory Theatre in Eureka, is about a roomful of writers for a 1950s comedy-variety TV show. Joe McCarthy and the Blacklist lurk in the background, and troubles with the network animate the plot. But mostly it's about the characters in that room, and a parade of jokes that mirrors Simon's tutelage on just such a show.

The "Simon says" character is Lucas (played by Evan Needham), who narrates as well as participates. Milt (Scott Osborn) wears outlandish costumes to work (a bullfighter's cape with a French beret) because it gets him noticed in a competitive arena. Carol (Darcy Brown) is the only woman on the staff, and the only one who seems to pay attention to the outside world. Kenny (Dave Fuller) is less ham than wry, and Ira (Ellsworth Pence) is the house hypochondriac, as well as a comic anarchist.

Val (Anders Carlson) is a brooding paranoid Russian, while Irishman Brian (Clayton Cook), the only non-Jewish writer, has swallowed the show biz blarney stone. Helen (Kelly Hughes) is the perky secretary. They all must contend with the imperious peccadilloes of the show's star, Max Prince (David Hamilton). Under creative and business pressure, Prince drinks too much and takes too many pills. "I fell asleep with my eyes open," he says. "I thought I was dreaming about the ceiling."

There are brushes with sentiment, passes at seriousness and stabs at theories of humor. "All humor is based on hostility -- isn't that right, Kenny?" "Absolutely. That's why World War II was so funny." The writers don't seem to write anything, though the one sketch being developed is a highlight -- a parody of Marlon Brando in Julius Caesar (Hamilton nails it). But plot, context and philosophy are all secondary to laughs, and the highjinks and jokes in this 1993 play come faster than in anything Simon had written since his earliest plays.

The whole cast is funny, but I was especially impressed by how Anders Carlson played his character with precise economy, and how Darcy Brown (formerly Darcy Daughtry) vocally and physically created an instantly believable 1950s character. And David Hamilton plays the mercurial shades of Max Prince with comic moves that kept surprising and delighting the opening night audience. Articulation and timing should even improve as the actors find new moments to play.

Though this is a sanitized version of the '50s and this group, Calder Johnson designed a suitably tawdry writers' room, and director David Moore keeps the actors and action moving in this single set. Costumes (including the outrageous ones) are designed by Lauren Wieland.

Though the Max Prince Show is based very loosely on the last two years of Your Show of Shows starring Sid Caesar, the play's characters are even more loosely based on writers for that program and its immediate successor, Caesar's Hour. The hypochondriac Ira is based on the hyperglycemic Mel Brooks, and Milt and Kenny are even more vaguely based on Carl Reiner and Larry Gelbart (creator of TV's MASH). The two closest parallels, though, are Val, based on Russian immigrant Mel Tolkin, and Carol, who is a little of Selma Diamond but mostly Lucille Kallen (also famously allergic to the pervasive cigar smoke. In the play she claims she has to keep her dresses in a humidor).

These legendary writers' rooms also inspired a film, My Favorite Year, which combined Sid Caesar with Steve Allen. It shows a shy writer whispering his jokes to another writer. That's Neil Simon whispering to Carl Reiner. Reiner also drew on his Caesar experience for the classic sitcom he created, the Dick Van Dyke Show.

But no play or movie or TV show has come close to suggesting the unique comic genius of Sid Caesar, or the inspired mayhem of his TV shows. I saw them as a child and remember some of the sketches to this day. There are a few on YouTube, and more on various DVDs. There's more on the play's connections to the realities at stagematters.blogspot.com.

On Friday and Saturday (Feb. 3, 4), VDAY Humboldt performs Eve Ensler's Any One of Us: Words From Prison (monologues of women prisoners) as its annual benefit for the North Coast Rape Crisis Team and the Prison University Project, at HSU's Native American Forum, at 7 p.m. 530-448-9458.