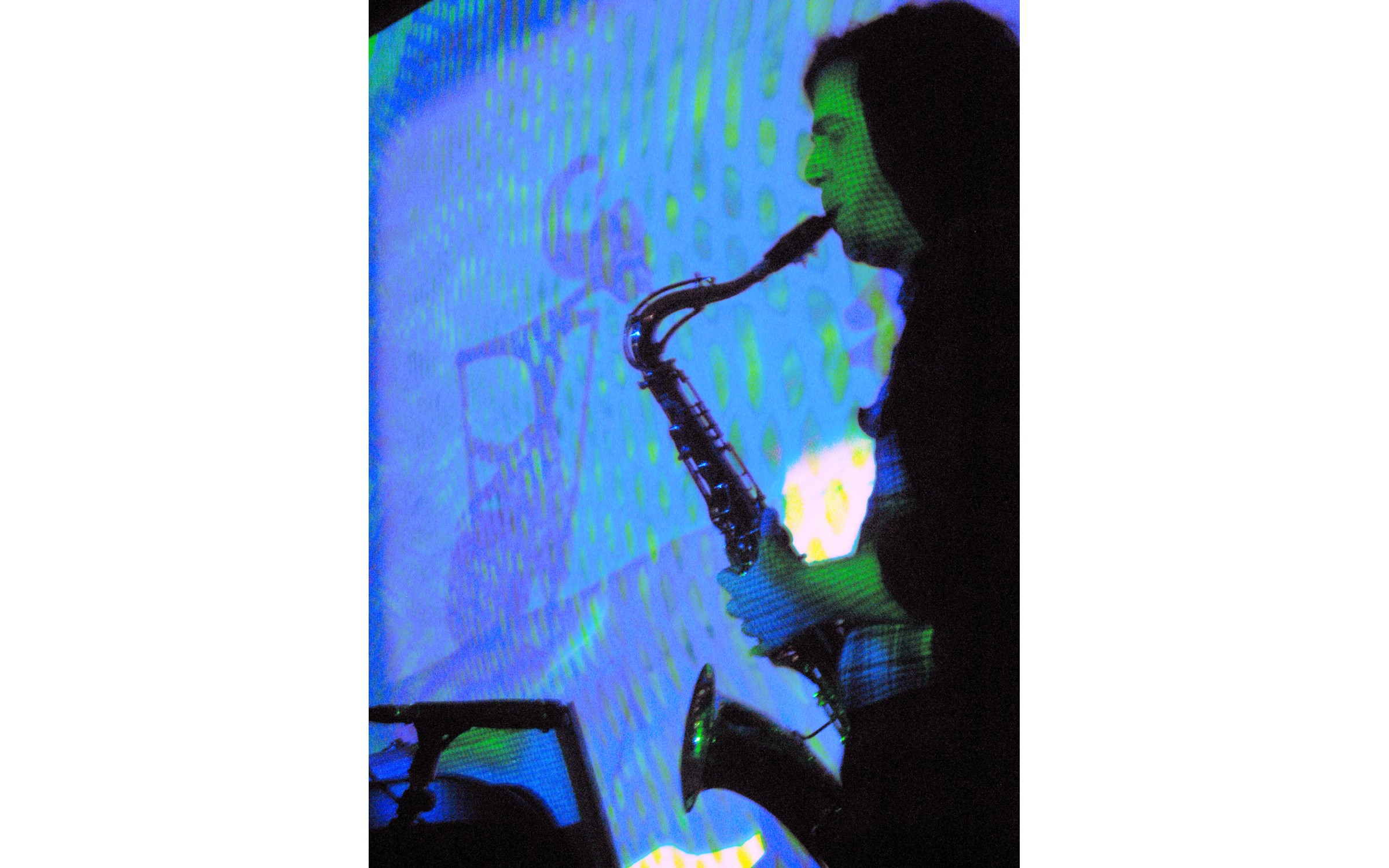 In Humboldt Ryan played in High School, Pubic Zirconium and Daytime Minutes (full disclosure, that band also included this columnist's son, Spencer Doran, and Ryan also plays in his band, Cloaks). Last year he joined the already extant Eternal Tapestry, originally started in 2005 by guitarists Dewey Mahood and Nick Bindeman, now with Nick's brother Jed on drums and Yoni Kifle on bass. "They were all friends of mine and when they were going on tour, I wanted to go just to hang out," said Ryan. "They figured I should play on a couple of songs, and that turned into being in the band full time."

I wondered, what difference has he found between the Humboldt music world and the seemingly vibrant scene in Portland?

"Oh, man," he began, hesitating. "Portland is a town full of musicians and bands, too many bands. The scene's kind of chopped up -- there's no sense of family to it like in the Humboldt County scene. The scene down there is full of people helping each other out -- like in a family. I miss that. Someone told me the sound system we bought when I was with the Placebo is still floating around; people are still using it."  (Carlisle and Abe Ray, another Humboldt expat now living in Portland, were the original founders of the Placebo. The sound system he's talking about is indeed still around -- it will be used extensively for next weekend's Golden Road Music and Art Fair, a multi-stage Ink People benefit at the Old Creamery in Arcata on Sunday, Aug. 1.)

Expect some new songs when the Tapestry boys come to town. The semi-major indie label Thrill Jockey recently signed E.T. and there's a CD in the works. "They gave us an advance and we used it to buy recording equipment," said Ryan. "There may even be money to be made. We're lucky to do this deal with Thrill Jockey. It's a good deal -- something like 50/50 -- so if we really make it, we'll get something out of it." Thrill Jockey notes, "The new material will come from the band's current live set, a combination of fast punk-inspired songs and epic krautrock-influenced guitar improvisations," which is what you'll hear at their three Arcata shows in three days.

Eternal Tapestry plays Saturday night at the Alibi. Then on Sunday the band helps provide the soundtrack when The Crafty Mavericks take over the Arcata Plaza for a Summer Craft Extravaganza with dozens of booths selling vintage items and alt. craft goods. Also performing that day, Plankton Wat (Dewey Mahood's solo guitar project), plus locals Jeeze Louise (with the crafty Aimee Taylor from Monster Women) and the Neil Diamond tribute The Solitary Men. Monday E.T. plays for Budget Rock Night at the Jambalaya with Starving Weirdos along for the ride, either as a band or as DJs.

Also in the experimental vein, a bonus Budget Rock Night this Thursday at the Jam with two bands from Seattle, the epic tribal sludge band Wildildlife and their friends Emeralds, who play something they call "psychedelic thrash."

Remember the mention here a few weeks ago about the Tom Petty tribute Full Moon Fever booking some casino gigs? The first one is Friday ay Bear River.

Great American Taxi is back in town for a show Friday at Humboldt Brews with Vince Herman of Leftover Salmon fame driving the Americana cab.

Still want more reggae after the sold out Reggae on the River? The Lion Camp posse takes over the Jambalaya Friday with Jah Sun, Ishi Dube, Stevie Culture and Winstrong.

Saturday at the Jambalaya, That's How We Roll Productions presents a splash of hip hop mixed with dance grooves with Scarub of Living Legends plus DJ Foundation and Kruse and local beatmeiser Masta Shredda.

At Mosgo's Saturday, Benyaro, a folky acoustic indie soul combo from two quite different cities, Brooklyn and Jackson Hole, out on tour with a new album, Good Day Better. The title track is a bouncy, catchy number -- good stuff. Might be nice for a post-Folklife Fest evening. (See Calendar for details on assorted Folklife happenings.)

The Riverwood Inn brings back Candye Kane Saturday for another mess of blues.

A couple of choices for Sunday: Luke Winslow-King, a very cool songwriter type originally from Michigan, but now based in New Orleans. The jazzy songs on his latest, Old/New Baby, swing hard with a neo-New Orleans bounce. Recommended.

Or you could go to the Arcata Playhouse to hear The Toughcats, a trio from the Fox Islands off the coast of Maine who mix old time string styles with new fangled jazz and Beatle-esque pop. Also recommended, but you'll have to choose.

Looking for a summer hippie festival in the hills? The 13th annual Trinity Tribal Stomp runs from Friday until Sunday in Junction City out in Trinity County under the guidance of Drew, who I'm told owns the local health food store. The music variety stretches wide starting with some EastHum reggae Friday night by Woven Roots and Seed N Soil and special guest Messenjah Selah (plus a drum circle). Saturday's on the jammy side with Ivan Neville's Dumpstaphunk headlining plus Jemimah Puddleduck with Mark Karan from Ratdog, the jazzy Garaj Mahal, the organic Clan Dyken, Lansdale Station (also playing the Peg House Sunday), and all the way from SoHum, Lost Coast Marimbas. Sunday gets folkier with The Wailin' Jennys down from Canada, plus Blame Sally, Alice Di Micele and a reunion of Freedom Tribe, a shapeshifting outfit led by the dreadlocked Freedom, who, according to freedomtribe.com, "is an ancient soul, a mystic word master who has been gifted with poetry and songs meant to help heal the nations, awake the sleepers and share the visions of the Native Grandfathers and Grandmothers." Sounds very tribal, doesn't it?

Leon Russell is an American music icon, a songwriter with a long list of hits and a legendary keyboardist, both on his own and in countless studio sessions. Boomers know him best from his work in the ’70s -- solo albums, Delaney and Bonnie, Mad Dogs and Englishmen, Asylum Choir, Concert For Bangladesh, etc. -- but he started way earlier.

Born and raised in the Tulsa area, he put together his first band at the age of 14 before moving to L.A. in the early '60s. There he worked for Phil Spector developing the "wall of sound" and contributed to countless rock hits from that studio and others including playing keys on "Surf City" by Jan and Dean and on sessions for everything from Bobby "Monster Mash" Pickett and Herb Alpert's Tijuana Brass to The Byrds and The Stones. He wrote "Delta Lady" for Joe Cocker, the Carpenters' hit "Superstar" and "A Song for You," which was covered by Donny Hathaway, Whitney Houston and Christina Aguilera among others. He had hits on his own with "Tight Rope" and "This Masquerade," etc.

What's he been up to lately? Best Of Hank Wilson, a reprise of his Hank Williams country persona, came out last year on the Leon Russell Records label. He and Sir Elton John just recorded a duet album, The Union, with Bernie Taupin contributing, set for release later this year.

Leon's website has a link to a section titled "Leon speaks," where I'd hoped for further insights. All it says there is, "Leon speaks through his music." And he speaks eloquently. Hear what he has to say this Thursday when he sings a song for you at Humboldt Brews.