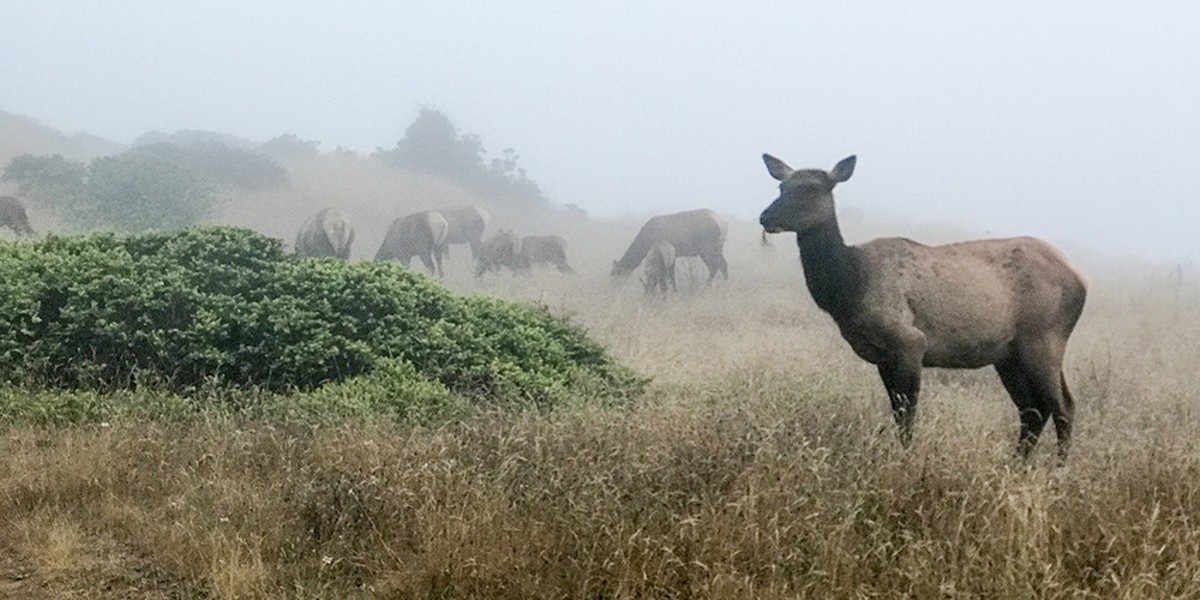 Photo by Barry Evans Elk in the grasslands near the Visitor Center. 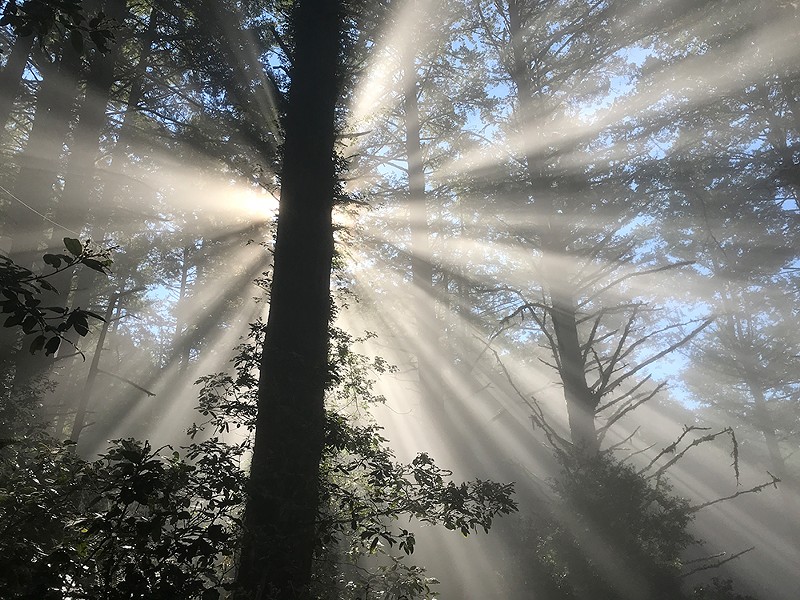 Photo by Barry Evans The sun dappled forest canopy in the Sinkyone Wilderness. 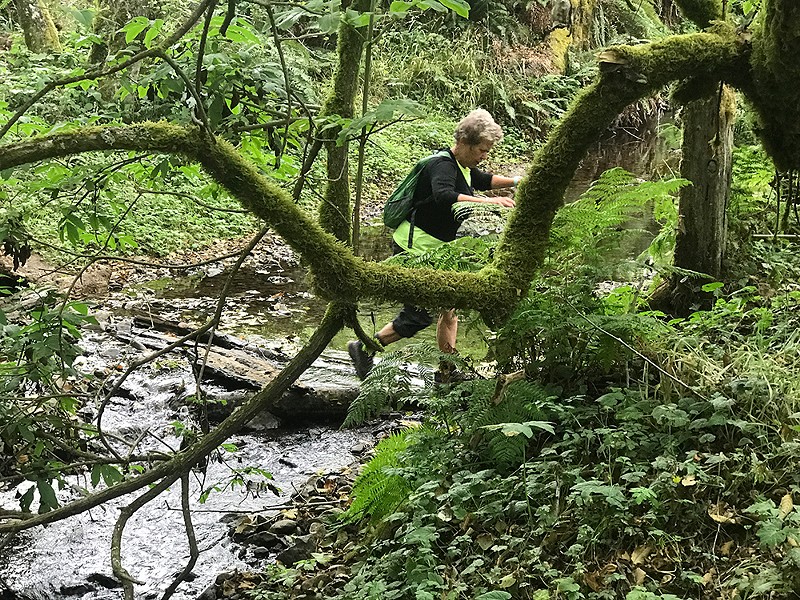 The first thing I see upon waking is a female elk poking her head into our open van door, a few inches from my husband Barry's face. I blink. Is this real? The elk wanders off and Barry starts to laugh. "What's the protocol when a lady elk approaches you?" he asks.

We have just spent the night at Needle Rock, opposite the visitor center, a former ranch house located on a rough patch of Briceland Road, leading to the Sinkyone Wilderness trailhead at the southern end of the Lost Coast.

This morning we plan to ride our bikes three miles to the trailhead — cycling, not driving, because the remaining section of road was closed after a landslide in 2012. Then we'll walk 5 miles to Wheeler Camp — a now vacant logging site — and back. For us, it's a day hike. Others are backpacking 20 miles to Usal Camp at the southern end of the trail, accessible from U.S. Highway 1, west of Leggett.

As we cycle out of Needle Rock, we see more grazing Roosevelt elk — offspring from the original 17 relocated from Prairie Creek in 1982. At the trailhead, we lock our bikes and set off. Within less than half a mile, we abruptly change ecosystems: grasslands to forest, light to dark, a sense of movement from outside to inside. The Sinkyone Wilderness is a mostly shady temperate rainforest, ribboned with glimmers of sunlight that spotlight lacy spider webs hanging from the trees. The path meanders up and down over rugged coastal ridges with a total elevation gain and loss of 1,400 feet. Logging cleared many of the trees but groves of redwoods, dense coastal vegetation and brush (and poison oak!) remain. Spanish moss hangs off branches, and purple thistle and orange monkey flowers punctuate the green. Oddly, I see only one bird and one frog all day.

As I walk, I imagine the settlers from Mendocino, who, according to our guidebook The Hiker's Hip Pocket Guide to the Humboldt Coast, had to walk, drive stagecoaches or horses through the Sinkyone Wilderness to Eureka to register their land claims. I'm also remembering what I read on the Sinkyone Wildernes2s State Park website: During the late 1960s, the Catholic mystic Thomas Merton believed Needle Rock would be an ideal place for a life of prayer and contemplation and considered establishing a monastic community there.

A sound suddenly interrupts my thoughts. Surely that's not a car. Oh, of course. I smile at my mistake. It's the sound of far-off surf, which I can faintly see through the fog.

Descending again, we enter a small, thick, first-growth world all its own. "The forest primeval," I think, remembering Henry Wadsworth Longfellow's Evangeline. We've arrived at a forest within a forest.

We walk along in the gloom, occasionally meeting people, some from very far (Australia), others very near (Redway), as well as folks from Seattle, San Francisco, Sebastopol and Mendocino. A family of four from Lake Tahoe tell us they're "smoke refugees." After waiting for two days for the Ferguson Fire smoke to dissipate, they gave up on hiking in the Desolation Wilderness and drove all the way to the coast, taking refuge in the Sinkyone.

After two hours hiking, we pass through a grove of virgin redwoods called Schoolmarm Grove and soon after, the ghost logging camp of Wheeler. The camp was relatively recent (1950-1960) so we wander around hopefully, looking for remnants left behind by its original occupants but are unsuccessful. Ten minutes later, we reach the beach, where we eat lunch at a picnic table on this side of an estuary.

On our return, we cycle up and down the dirt road back to Needle Rock. Nearing the gate, I see the herd of elk grazing and I wonder which one was flirting with Barry this morning.

Getting there: Needle Rock, just inside Mendocino County, is a three-hour drive from Eureka. Head south on U.S. Highway 101. Take exit 642 (about 60 miles from Eureka) to Redway. From Redway, head west about 22 miles on Briceland Road. About a half-hour from Redway, near Whitethorn, you'll pass the Redwoods Monastery, a Cistercian abbey. (We sat for several minutes on a bench in the rectilinear glass-windowed chapel, contemplating the redwoods outside). Drive another 4 miles on Briceland Road to "Four Corners," where you cross Usal Road. Continue straight on the steep, narrow, bumpy dirt road 3.5 miles down to Needle Rock Visitor Center, where there's a $6 per day parking fee. The arrival at Needle Rock is worth the rough road, with the view of the valley and ocean and the Needle Rock Visitor Center, which is filled with historical photos and artifacts.

Camping is available at the Bear Harbor Environmental Camp, 3 ½ miles from the Visitor Center, for $3.

Nothing makes Louisa Rogers happier than poking around the areas north, east and south of Eureka with her husband in their camper van.