Photo by Louisa Rogers Descending the steps into a lush, green portion of the Lanphere Dunes. 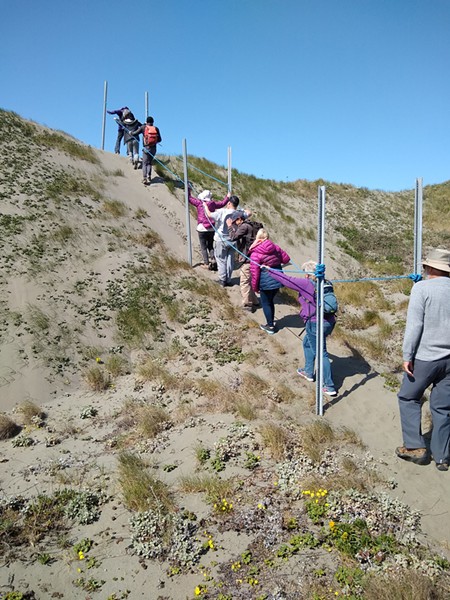 Photo by Louisa Rogers Ascending the steepest part of the Friends of the Dunes guided tour of the Lanphere Dunes.

I would never have guessed that back in the 1930s, the entire Cal Poly Humboldt faculty (then Humboldt State College) could fit into one house for dinner.

This was one of many bits of trivia I learned on a Friends of the Dune guided tour of Lanphere Dunes earlier this spring. Thirteen of us assembled at 10 a.m. on a Saturday at the Pacific Union School in Arcata to carpool to the private Lanphere Dunes, located north of Ma-le'l Dunes.

"The first part of our walk is the hardest," warned our veteran guide, John St. Marie, who has held every role imaginable in the FOD organization since 1988. Sure enough, I had to grab onto the ropes on either side of the short but steep and slippery path. When we reached the sandy flatland above, we listened to St. Marie describe how the Lanphere Dunes include not just dunes, but also wetlands, subtidal channels, mud flats, conifer forest, marshes, part of the Mad River Slough and beach. At this latitude, southern and northern dune plants overlap, creating a rare mix of vegetation. While the wind whipped around us, we headed off to check out the freshwater skunk cabbage, spruce, red alder, ground nesting bees and invasive European beach grass.

John was a fount of knowledge, stopping every so often to describe a particular plant, such as the native Chilean or beach strawberry. In 1712, French cartographer and spy Amédée-François Frézier, stationed in Chile, brought beach strawberry plants back to France, where they were bred with the woodland strawberry, thus introducing the "New World" fruit to the "Old World." (His last name is where the French word for strawberry, fraise, derives.)

Later he stopped to show us a midden. "Remember, we are not the first ones. We are walking on unceded Wiyot land," John said, explaining how the Wiyot transferred food in woven baskets to hot rocks in order to cook it. Bits of cooking stones are still strewn about. Later I learned that the Friends of the Dunes is working in partnership with the Wiyot Tribe to pursue opportunities to return land to the tribe.

In 1936, Bill and Hortense Lanphere, a couple who were biology and fisheries professors, respectively, moved to Arcata from Seattle so Bill could teach biology at then Humboldt State College. They bought the 550-acre dunes property and used it for bringing students on to the land for research and education, a tradition that continues to this day. In her memoir Bedlam on the Dunes, Hortense described how they had to use the kitchen stove to heat water for a bath. The stove held two sticks at a time, which heated enough water for only one bath by bedtime, so she and Bill had to toss a coin as to who went first. The Lanpheres didn't get around to buying a fridge because it never got hot enough. At night, they read until 10 p.m., "ate a goose-liver sandwich, drank a bottle of Olympia beer, and then went to sleep." The house is still visible in the distance from the dunes.

Hortense, a professor of fisheries, was known as the "pistol-packin mama" because of her fierce protection of the dunes. In the 1970s when dune buggies became popular, she would carry her pistol and occasionally fire warning shots to anyone that trespassed. Once she was brought before a judge to respond to complaints by riders.

The Lanpheres maintained the dunes in a relatively pristine state until the '70s, when they sold it to the Nature Conservancy. It is now part of the National Wildlife Refuge System. At 32 miles, stretching from Moonstone Beach to Centerville, Humboldt County has the longest continuous coastal dunes in the state.

In January of 2021, 900 acres of Lanphere Dunes and Ma-le'l Dunes, the first dune habitat restoration project on the West Coast, were designated as National Natural Landmarks by the U.S. Department of the Interior. According to the Friends of the Dunes newsletter The Dunesberry, the organization is in the preliminary stages of bringing together the stakeholders of the protected lands around Humboldt Bay to create a new Wigi-Humboldt Bay and Dunes National Monument. Owned by different landowners, these conservation properties are often contiguous or connected by the waters of the bay, sharing the same wildlife, rare native plants, trails, Wiyot heritage and cultural significance, as well as challenges (such as invasive species, climate change and sea level rise). Under the new national monument framework, no partners would lose ownership of their land or any autonomy, and they would be able to attract more resources to address challenges and work more cohesively towards common goals.

Not enough detail for you? Try spending a morning soaking up not only fresh marine air and natural beauty, but also a store of botanical and historical information. You can sign up for one of the monthly half-day, free guided walks around Lanphere Dunes at www.friendsofthedunes.org.

Get Out Lanphere Dunes Friends of the Dunes