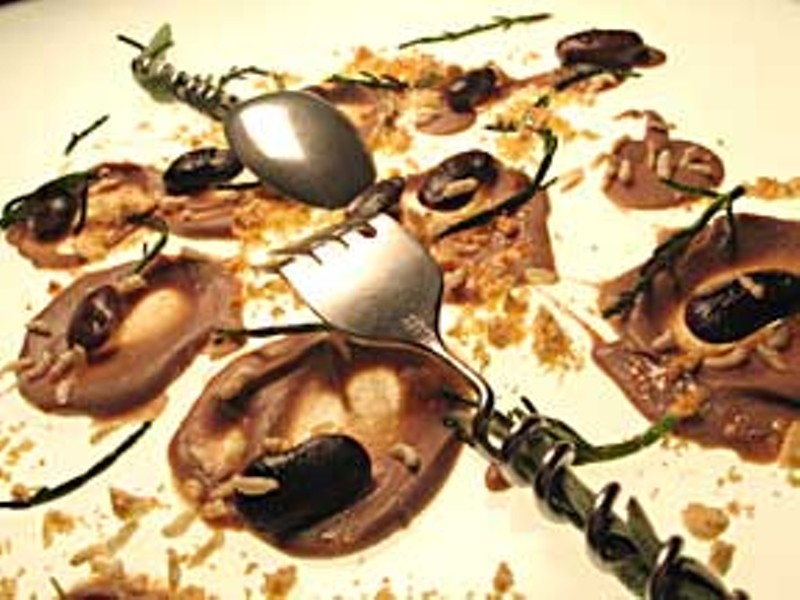 Three years ago we dined at the legendary Roxanne's, the nation's most talked - about vegan shrine, in Larkspur. The creation of a dot-com millionaire and his new wife, a glamorous and innovative chef, it was the first elegant "raw foods" restaurant. Nothing at Roxanne's was heated to more than 118 degrees F. This meant that everything had to be prepared in a way completely different from traditional methods.

It was not, however, some kind of "return to nature" - on the contrary, they used the most sophisticated techniques known: ingredients blended at aerospace speeds, made into froths and pastes, then dried and reconstituted (as sheets of flatbread or tortillas, for example), with ingredients as rare and costly as imported threads of baby coconut sprouts. The owners purchased several hundred thousand dollars of industrial processors and ovens, some of them invented specific to their needs. And there was a large and skilled kitchen staff, because raw food at the highest level is the very definition of "labor intensive." Highlights from that evening's menu:

Coconut green curry soup with avocado, and red chili and green curry oils - a magical blend of coconut milk and avocado, the red and deep green swirls contrasting in flavor, color and texture

Zucchini cannelloni - the "pasta" of the cannelloni being paper-thin slices of zucchini marinated in saffron oil, filled with spinach, dried tomato and pesto, drizzled with balsamic reduction

Little gem Caesar salad - a stunning version, with a faux-Parmesan cheese made from dried pine nut paste, and fermented seaweed in place of anchovies

While Roxanne's was certainly an extraordinary experience (it closed the following month, after losing money for three years), it was by no means at the cutting edge of the culinary avant garde. Since the success of The French Laundry in Yountville, the "product-garnish-sauce" hierarchy has been disappearing in many high-end restaurants.

Since the mid '90s, El Bulli, in rural Spain, has been experimenting with food technology, and it is regarded by knowledgeable chefs and writers as the world's best restaurant. Its chef, Ferran Adria, has stated his intention "to provide unexpected contrasts of flavor, temperature and texture. Nothing is what it seems. The idea is to provoke, surprise and delight the diner ... Taste is not the only sense that can be stimulated: Touch can also be played with (contrasts of temperatures and textures), as well as smell and sight (colors, shapes, trompe l'oeil, etc.), whereby the five senses become one."

There are also highly innovative restaurant kitchens in London, New York, Chicago and San Francisco creating unusual marinades, infusions, broths and consommés, foams, pastes, edible papers, even utensils and vessels. Meat, which is less versatile than other ingredients, is used sparingly. A typical course might be thin slices of poached squab, served in little indentations on top of a glass tube, and inside the tube two burning cinnamon sticks that send up curls of spicy smoke. Or smoked yogurt to accompany a dish of puréed prawns, bound with transglutaminase and extruded through a steel die to make shrimp "spaghetti." Or a garnish of pickled cucumber and pressed, dehydrated mango, wound together in a pale-green and orange spiral.

Meanwhile, the "classical" structure of dishes is being broken down, particularly in first courses and desserts, which float between the sweet and savory worlds. One of the most fascinating chefs has abandoned "meals" altogether. At Will Goldfarb's hip New York venue, Room 4 Dessert, the chef prepares "desserts" like roasted foie gras (goose liver) on a quince puree with yogurt, almond and black truffle ice cream.

The price of such adventures can be astronomical, although Moto in Chicago offers a reasonable five course meal for $70. But if you are traveling to Chicago, you might as well pay $165 for the "Grand Tour":

Each course, naturally, has a suggested wine accompaniment. (There's the catch. Probably a cost equal to the food.)

As a cook, I am often impelled to duplicate something wonderful I've tasted. After experiencing our first pork pie in Yorkshire last year (not what it sounds like - it's a pâté in a rich pastry crust, to be eaten cold, with a glass of good dark ale), my wife and I determined to make our own, a project we will surely find time for this summer. But it's one thing for an amateur to attempt to reverse-engineer a dish, and quite another when competing chefs copy one another. This has been occurring increasingly, in part because the labor-intensive staff of apprentices in top restaurants move on to start their own restaurants.

Last fall, a scandal stunned the food world, as the online forum "eGullet" exposed restaurants in Australia and Japan that were copying dishes from some of the better known palaces of culinary distinction. These were not imitations of the originals, they were literal copies, documented by the restaurants' own online photographs, down to the last sauce swirl and perfectly-placed chive. And in a litigious culture such as ours, the word "copyright" was raised.

The problem is, U.S. copyright law specifically excludes ingredient lists and recipes from protection. "Well, this is an outrage," wrote one food editor. "You can copyright the world's worst photograph, but you can't copyright a recipe, or its expression as food? That's absurd!" And so there is a movement to change the law.

Unfortunately, it's a doomed effort. For one thing, literary works are copyright because words can be analyzed and codified. If, however, I want to imitate a protected recipe, all I need to do is change the name. Similarly, if I want to repaint Picasso's "Three Musicians," no one can stop me, unless I fraudulently represent it as an original Picasso. (Of course, who would want to buy Joseph Byrd's "Three Musicians"?)

Nonetheless, Moto's chef/owner, Homaro Cantu, has set about filing for copyright of both his recipes and his processes. And actually printing "© 2007" on a small card made of cotton candy!

There is an undertone throughout all this controversy that is defensive - after all, chefs are certainly as creative as any other artists, but they receive no royalties, there are few ways of making serious money from cooking, and only a handful are good enough at both art and business to create a restaurant empire. And is creating an empire the solution?

Lost in the controversy is a bigger question: Is this the wave of the future? Will we be eating mango-flavored origami and lobster foam on Mars? Actually, Cantu has been talking with NASA about applying his techniques to space missions. But the expense of such cuisine (ingredients, industrial devices, labor) is daunting. El Bulli is in business only half the year - the other half is used for research and development - and employs 50 cooks, most of them unpaid, for a dining room that seats only 60. Of course, a Guide Michelin three-star establishment can charge a small fortune for dinner, and their entire 2007 season is already sold out.

Returning to Roxanne's, recall that despite its celebrity and extravagant prices, it ultimately failed - even millionaires have their limits. And as interesting as the evening was, it was hardly something we'd want to do on a daily basis. The word "precious" comes to mind. Cooking is a creative craft, but at its heart are the basic human values of sustenance and comfort. Even Chef Goldfarb eats a bacon, egg and cheese sandwich for breakfast. So I say no, this is novelty, not prophecy; a phenomenon, not a trend.

But what do I know? Forty years ago I would have sworn there was no way Americans would ever eat cold sticky rice and raw fish for dinner.

Joseph Byrd can be e-mailed at eat.your.spinach@gmail.com. He is presenting a paper on whitewashing history in American music textbooks at the American Culture Association Conference in Boston in April.