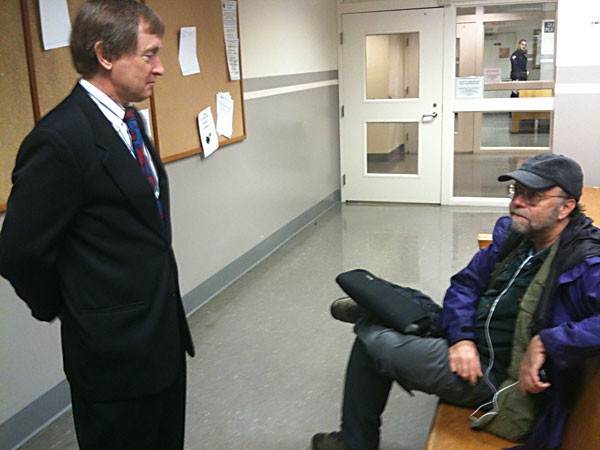 There's no love lost between the Arcata marijuana grow house scene and Kevin Hoover, editor/publisher of the Arcata Eye.

As neighborhood backlash against grows increases, as police takedowns become ever more common, and as national media take unwelcome notice of the quirky little town with 1,000 indoor pot farms, growers have pinned their frustrations on Hoover, who reports on the industry just about every week in his newspaper. He's been attacked in his own pages and on the Web. His motives have been impugned in flyers that were hung around town. Weed-related businesses have pulled their ads.

Now, though, one defendant in a criminal grow house bust has taken matters a step further -- by attempting to rope Hoover into his case. Daniel Carbonneau, who was arrested on June 25 after a raid at an Old Arcata Road home uncovered 275 pot plants and four pounds of marijuana, has subpoenaed a long list of internal Arcata Eye documents and correspondence, apparently in an effort to prove that Hoover had been working with the police.

"This is a common tactic -- to make the reporter part of the story so they can't report on it," Hoover said outside a Humboldt County courtroom Tuesday. A hearing on the matter had been scheduled for that morning, but was postponed to January 12.

Since Hoover intends to battle the subpoena, the case could turn out to be a test of California's shield law, which generally protects reporters from being compelled by a court to turn over unpublished information relating to their work. Shield laws in California and other states are founded on the idea that reporters must be able to operate independently of law enforcement, and must be able to protect confidential sources and other privileged material if the press is to function.

But Carbonneau attorney Steve Schectman, who has worked extensively in California medical marijuana law, alleged Tuesday that Hoover already does work with the law enforcement in documenting and taking out grow houses. Schectman said that he had plenty of "anecdotal" evidence to suggest that Hoover operated as a police informant in his client's case, and therefore is not entitled to immunity under the shield law.

"You can't wear two hats and get the protection of one," said Schectman. He said that if he can prove that Hoover illegally obtained evidence against his client, and if that evidence later made it into the search warrant served at the Old Arcata Road home, then the case against his client would have to be dropped. "If you can prove that, the search warrant would be quashed," he said.

Hoover vehemently denied serving as a police informant in this or any other case. "I don't work with the cops, for the record," he said. "I'm out in the world gathering information for my readers. I never published anything about that house before the cops took it out. I never talked to the cops about it."

For over a year, Arcata's bustling indoor marijuana scene -- which has been the cause of major house fires, dozens of arrests, inflated rental prices and untold millions in revenue -- has been a major topic in the Eye, a weekly newspaper with a circulation of around 3,000. When national papers or TV networks come to town to file dispatches on what Hoover calls "the pot cartels," they nearly always include interviews with him.

A little over a year ago, Hoover started approaching the subject in a systematic way, taking complaints about neighborhood grow houses from readers and compiling a list. He wrote letters to owners of the houses, asking them if the property had, in fact, been turned over to marijuana production. Hoover saw it as a reporter doing his job; some growers took it as "snitching" or some other kind of unwarranted intrusion into their affairs.

All the attention and the publicity, naturally, have been unwelcome. Hoover believes that the real reason that he was subpoenaed is to squelch his reporting on the story by smearing his character -- in other words, that the marijuana industry, in this case, is functioning just as any other major industry with secrets to keep would function.

"It's just chicanery," he said. "They're trying to shut down the only person around on this story."

Attorney Paul Hagen -- a former prosecutor now with the Eureka firm of Bragg, Perlman, Russ, Stunich & Eads and a man often cited as a likely challenger to District Attorney Paul Gallegos next year -- has agreed to represent Hoover on a pro bono basis.

In all, Carbonneau has subpoenaed 53 different categories of documentation from the Eye, including personal notes, photographs and correspondence with the defendant, local police agencies, community groups and the Arts & Entertainment network, producers of the recent documentary Pot City U.S.A.