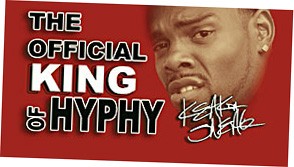 It was chilly last Thursday night at 9 o'clock. Too cold, in my opinion, to be outside wearing a tank top. But there they were, maybe a dozen girls and women, high schoolers and twentysomethings, shivering on the 5th Street sidewalk in spaghetti strap tops. Just looking at their neon-lit arms gave me goosebumps. All the guys were dressed more appropriately for the weather; jackets, sweatshirts, knee-length tees. They all huddled in little groups, sharing cigarettes and bottled water, waiting for the same thing: Tickets to Keak da Sneak. It's not often Eureka attracts hip-hop acts so current and high-profile as Keak - the self-proclaimed originator of the hyphy genre - so milling around in the cold didn't seem like too much to ask.

Two middle-aged security guards stood in front of the doors to the Indigo Night Club, making small talk. The big, gabby one told everybody to have their IDs ready and to form two lines; 21+ and 21 and under. A little after 9:15 p.m. a white Crown Vic pulled up to the curb. Trademark, up-tempo hyphy beats poured from the car's open windows. "You just don't do that," my companion said in a pained voice, hands tucked into her pockets. It was the hit song everyone had come to hear, the one even new fans of Keak da Sneak would recognize: "Super Hyphy." Is it uncool to roll up to a concert venue, blasting tracks by the night's headliner? Kind of. But it provided a brief distraction from the locked doors everyone had been focused upon. A big man with short blond hair exited the passenger side and approached the thin crowd with an odd gangster stroll. The driver, a young woman, pretty in a tough way, sat awhile and let the song play. "First, Second Verse, Dis My Third," Keak rapped in his trademark husky voice. "Six Grade Drivin' to School, I Had a Firebird / I Don't Think They Knowin', That's my Word/ Oh, You Hip Now?/ I Was a Problem Child, You Was a Nerd." I wondered how it would sound live.

"Turn it up and everybody-a-be gettin' krump and shit!" one happy girl suggested. She had a country twang that didn't mesh well with urban slang. She bent her elbows, clenched her fists and jerked her arms back and forth in front of her chest demonstrating the krump dance. Kind of. By then the big man was working his way through the line to talk with people he knew. As he passed I realized why his swagger was off - he wore a plastic cast and was limping.

The line started to move around 9:40 p.m. I was checked off the guest list - thanks, Bob - and paid $30 for my girlfriend's ticket. "What time does the show start?" I asked the man who was snapping a plastic band around my wrist. He explained that at 10:30 p.m. the DJ would warm things up, followed by the opening act. "Keak comes on around 12:30," he said, now placing a band on my companion's wrist. We looked at each other in shock. The bands suddenly seemed like handcuffs. Three more hours until Keak? 12:30 a.m.? That's late! Past my bedtime! Before we could say anything we were being ushered into the club.

We walked inside - the décor, I noticed, has really improved since the Club West days - and proceeded out the back door and down to the coffee shop. "I feel like an old lady," I said, settling into an arm chair and wrapping my icy hands around a cup of hot chocolate. I was tired and wanted my money back. We discussed our options. Go home and come back later. Hang out at the Shanty for a few hours. Call it a night and forget the money or shamelessly ask for a refund. We chose the latter option and walked back to the club. No dice. They don't do refunds. Instead they offered to give me a ticket to another show.

The night was a bust. I felt like the nerd Keak raps about, but I didn't care. At least I got to hear one song.