7 Walkers, Will Jam for Food and other benefits 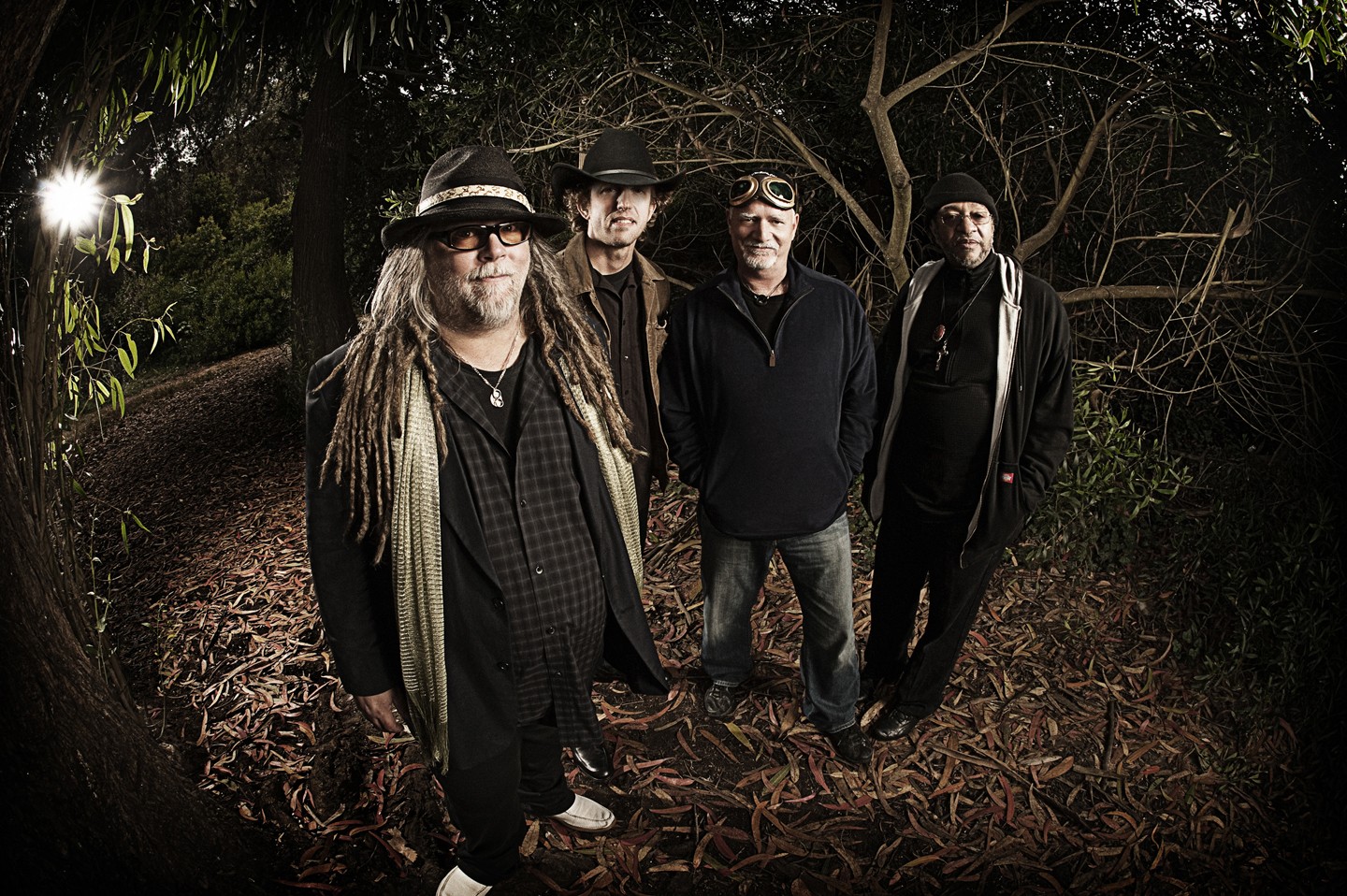 Among the many acts playing this weekend's Oregon Country Fair outside of Eugene is a band called 7 Walkers, which actually owes its existence to that venerable hippie festival. While attending the fair a few years back Bill Kreutzmann, one of The Grateful Dead's famed "Rhythm Twins," met dreadlocked New Orleans bluesman Malcolm "Papa Mali" Welbourne, a cat with a growling voice, originally from Shreveport, La., now based in Austin, who is kind of like a later-day Dr. John with a slide guitar.

The two musicians ended up jamming into the wee hours somewhere in the Oregon woods and hatched a plot to form a band. They enlisted keyboardist Matt Hubbard from Willie Nelson's band, then later N.O. bassist extraordinaire George Porter Jr. from The Meters. Dead lyricist Robert Hunter and Papa Mali worked up some songs together and 7 Walkers was born. The band returns to the OCF Sunday night (the fair runs Friday through Sunday), but first there's a stop in Arcata for a Thursday show at Humboldt Brews. All Deadheads and fans of N'Arlins funk should make plans to be in attendance.

It's been a while since we've heard The Nucleus -- between duties raising babies, playing Petty covers and running business enterprises (a recording studio and several restaurants among them) the members have been too busy to play Nuke music lately. But Friday the band is hitting the stage for a special edition of the ongoing Food for People fund-/food-raiser Will Jam For Food. The show is Friday at the Jambalaya, one of several joints run by Nuke drummer Pete Ciotti.

And that's just one of two Will Jam benefits this week at the Jam. As the ubiquitous Jesse Jonathan notes, "The Will Jam For Food crew has been trying hard to get more food to more people. We want to take it beyond the jam sessions we've been doing so we're trying some different things." Thus you have Tuesday's hip hop/reggae "jam" led by hip hopper Chris Baker, aka C-Baker from SambAmore, with Judrum and Kiki and The Dream Team plus reggae musician Mkyal Somer and Jesse's drum crew SambAmore. DJ HighGrade and Area Sound are on the turntables. That's Tuesday July 12 at the Jambalaya.

Speaking of reggae, you can hear some for free Friday night as EastHum rootsmen Woven Roots join the ranks of bands playing the Wave Lounge at Blue Lake Casino.

For the blues fans we have the lovely Karen Lovely from southern Oregon, here with her band to play the blues Saturday night at the Riverwood Inn. (Where else would someone play the blues?)

If you checked in on the Journal blog over the weekend you may have seen Thomas Dunklin's cool little video clip of a gray whale and her calf spouting rainbows while swimming in the Klamath. Thomas is a multi-talented sort, a juggling unicyclist, a fine photographer, musician etc., who has a studio space above Plaza Design on the Arcata Plaza, where you sometimes see salmon swimming in the window (well, video projections of fish). He sent a note the other day announcing, "I'm reconfiguring my production studio into a multi-artist gallery of watershed arts, science and culture," something he calls The Watershed Information Gallery, aka TWIG.

Participating artists include: painters Bob Benson, Joan Dunning, Mike Guerriero and Carol Anderson; photographers Sam Camp and Dunklin; and Yurok and Karuk "carvers/jewelers/painters" Brian Tripp, Merk Oliver, Orowi Oliver and Frank Lake. If all goes according to plan, TWIG will celebrate its grand opening at Friday's Arts! Arcata. Thomas promises he'll bring his mandolin and play "at least one dam-removal song. And hopefully a guitar player will appear at the appropriate time." Incidentally, you might ask Thomas to show his dynamite dam-removal video, a real blast to be sure.

Soul to Soul Spa and Foot Bar celebrates its first anniversary that night with a celebration featuring Brian Woida, aka DJ Mantease, on the turntables.

Elsewhere in Arcata that night, as always Bubbles has the bluegrass band, Clean Livin'. The Pilot Rock Ramblers play stringband music at Garden Gate. Abruzzi has jazz trumpet player Sam Maez with Easton Stuard on piano. (Easton also leads a trio at Persimmons in Redway Saturday.) 3 Foods Café presents pianist Joel Bettencourt and his trio. Café Brio has yet another jazz keyboardist, Aber Miller, with Sam Roberts. (Incidentally the oils are by Faye Honorof, not Rachael Schlueter.) Libation has a jazz trio with Janelle, Lee and Sky.

Also in Arcata Friday -- but exactly not part of Arts! -- "A Night of Music, Medicine and Mantra" at the Community Yoga Center by Ena Vie, a self-described "artist, poet, singer/songwriter, guitarist and woman passionate about honoring the earth," (translation, New Age musician), with Yehoshua Project and Prem.

And all day and into the night Friday, Old Growth Tattoo in Eureka celebrates its grand opening with food (catered by Humboldt Café), burlesque performances and dubstep by Master Shredder, J-Sun, Mike D, and Psy-fi.

Mary Jane: The Musical has come and gone, but Dell'Arte's Mad River Festival continues. They'd planned on a music show Saturday afternoon on the stage in back, appropriately called Bands Out Back, with Strix Vega and bluegrass boys No Good Redwood Ramblers. However on Tuesday we heard from Dell'Arte that the show is cancelled. Apparently someone had not looked into what else was going on Saturday: "It was up against Summerfest, and we had ZERO sales :(," said the note.

In case you did not read our calendar, Mad River Summerfest runs all day Saturday in between Arcata and Blue Lake at Pump Station No. 1. You'll find full details and band times elsewhere in this issue.

Among the many bands at Summerfest is Chris Wixson's cool soul/jazz/blues/etc. combo Speakeasy Saints. After their early afternoon set by the river they'll head into Eureka that evening to play another fun event: the Sequoia Park Zoo's Twilight Summer Concert.

Blue Ox celebrates its 20th anniversary Saturday at the Millworks with the usual demos of old-time crafts (blacksmithing, woodworking, etc.) and as always at these affairs, plenty of music, this time provided by the eclectic John David Young Trio, Joe Garceau and SoHum songster Bud Rogers.

The annual American Cancer Society benefit Relay for Life runs all day Saturday at College of the Redwoods, which mostly means people in purple T-shirts walking around the track, but there's also a stage with music all day. And we're talking some of your favorite local bands including The Roadmasters (1 p.m.) St. John and the Sinners (3 p.m.) The Trouble (5 p.m.) and Sour Cream (7 p.m.), plus non-local Justin Williams from American Idol (10 p.m.). KHUM is broadcasting live from CR for the 24-hour duration. (Side note: St. John and company morph into Mirage and Creamed that night for a Fleetwood Mac/Cream tribute band two-fer at the Red Fox.)

Down in SoHum Saturday it's the 7th annual Hospice Barnyard Brew, BBQ and Auction at Garberville Rodeo Grounds, which, in case you've never been there, is at Greycliff Acres, on the road that goes past the Benbow golf course. Expect the requisite microbrew tasting plus a barbeque dinner by local celebrity cooks The Flaming Chefs and fun things for kids to do. There will also be auctions and music, mostly on the twangy side with country/bluegrass by Way Out West, the public debut of Morning Wood Falls, a SoHum stringband that up until now has only played on back porches and in back yards (they're bringing some clogging friends to dance), and last but not least, The Hobohemians (great name), described by Julia from Hospice as a "20th century vocal jazz combo" that includes the husband of one of hospice's nurses. Helping folks deal with their dying days can be difficult work, and it's definitely important, so show them some support.