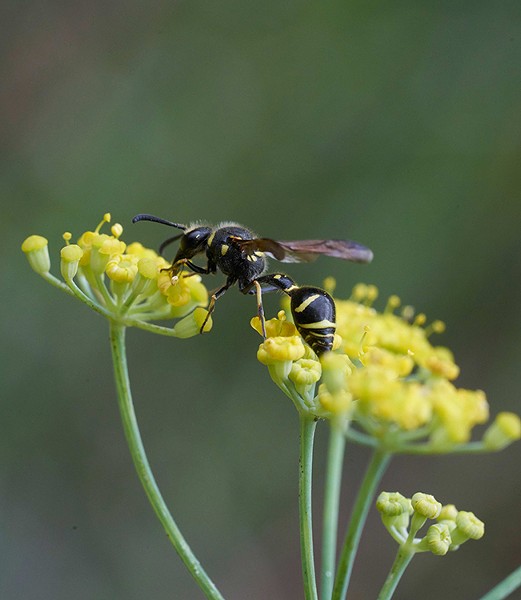 Late in the year, sources of nectar are scarce and those species that depend on it concentrate around the dwindling resource. Wild anise, a few thistles and other small flowers support that insect population and therefore increase a photographer's opportunities to see species often dispersed over a much larger area, so a short walk along the river bar can turn up a surprising variety.

A few years ago, I was delighted to find a potter wasp (family Eumenes), a creature I'd read about but never seen. These medium-small wasps capture, and sting tiny caterpillars repeatedly giving measured doses in exactly the right places to completely immobilize but not kill. Then they entomb them in a mud cell made in advance and lay their eggs on them assuring fresh food for the next generation. I was delighted to photograph two markedly different varieties both within 50 meters of each other. As adults they feed almost exclusively on nectar, leaving their high protein insect victims for their babies growing in their little cells. They will overwinter there as larvae or pupae to emerge next spring and perpetuate the cycle

Among the brilliant inflorescences I spotted an equally yellow moth landing, and managed to get one shot of it before it took off. A few minutes with the book Moths of Western North America and I think I've found it, Rectiostoma fernaldella.

The day was rounded out with a tiny green eyed fruit fly of the family Tephritidae, characterized by the remarkable patterns on its wings.

Why No Cricket Choruses?

A reader recently asked why he didn't hear grand evening choruses of crickets in Humboldt. Like much in nature, while the question may be simple the answer is not. According to Dolbear's Law, the chirp rate of a given cricket (which species is a bit ambiguous) can be used to calculate the temperature. One derivation is to count the number of chirps in 15 seconds and add 40 to get the temperature between 55 and 100 degrees F. Evenings on the North Coast are seldom that warm.  What we hear in the evening in many places are likely any of several species known collectively as field crickets. While I've seen a few locally, this area does not seem to support a large population. In my experience, we're most likely to hear tree crickets here — several related species that don't accumulate in masses sufficient to form a chorus. They're mostly limited to solos, duets, trios and the occasional quartet in a bush. Many species do not sing at all, filling their ecological niche in silence.

Recently there has been some chatter on the web in entomological groups about anecdotal evidence of collapsing insect populations. I call it the Windshield Conundrum: noticing fewer splats on the front of our cars. I notice fewer insects around my front porch light at night, too. These tiny observations taken as a whole may indicate that, at least in some places, humankind may be winning our age old battle against bugs. Considering how important insects are in the ecology, it's a war we don't want to win.

So to answer the original question: 1) The local environment does not support enough crickets to form large choruses. 2) Local evening temperatures seldom rise enough to motivate many males (only they chirp) to sing mating calls. 3) There may be fewer critters than in past days overall due to environmental changes, anthropogenic or otherwise. 4) Our local species prefer singing their love songs as solos. 5) And — most likely — some combination of all of the above.

Read HumBug every Sunday at www.northcoastjournal.com.