How did it all start? A bit of history. 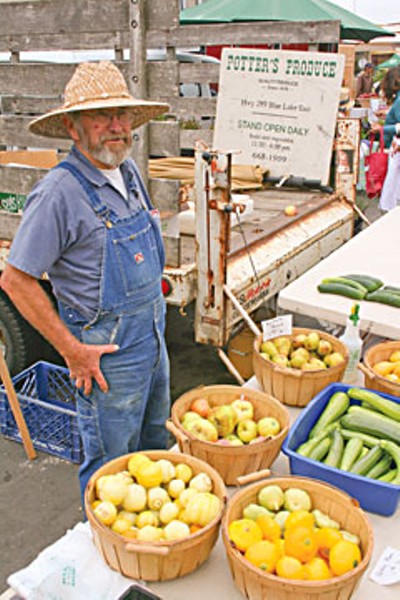 Denis Potter at the Farmers' Market. Photo by Bob Doran. 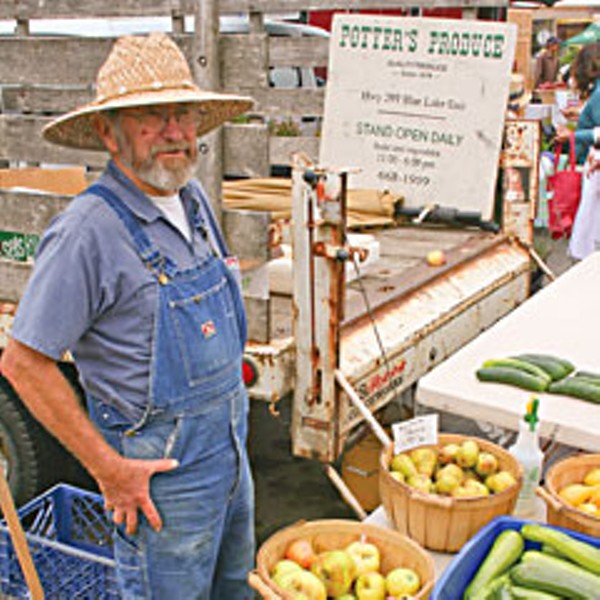 It doesn't look like there will be much to mark the occasion, just some giveaway raffles and some special activities for kids, but this Saturday the North Coast Growers Association celebrates the 30th anniversary of Humboldt County's Farmers' Market.

A couple of weekends ago, as I made my way from stall to stall on the Arcata Plaza shopping and visiting, I asked a couple of farmers, "Who was around at the start?"

I'd guessed that Marguerite Pierce of Pierce Family Farms was among the first. No, she told me. She'd come in a few years after the beginning. She suggested I check in with Denis Potter. "And you should definitely talk to Marilyn of Seaside Herbs. You know she started the whole thing."

Marilyn Kelly's Seaside Herbs stall was right next to the table Denis had set up in front of his truck selling the last of Potter's Produce for this season. While Kelly retains the name of her former cut herb business, nowadays she just sells potted plants, in part to make a little extra money, but mainly because she enjoys being part of the market atmosphere.

How did it all start? The short answer: Grant funding was used to fill a community need. Of course there was more to it than that.

As Kelly recalls it, the original federally funded community nutrition grant that led to the market was written by Pam Kambur, as part of her job working for something called the Redwood Community Development Council (RCDC), part of the now-defunct Center for Community Development. John Woolley, Humboldt County's outgoing Third District Supervisor, was executive director of RCDC at the time.

"We had some good connections with the White House during the Carter days," said Woolley. "That allowed us to get administrative support for some of our creative proposals through the Dept. of Labor." Along with looking at new avenues for local agriculture, RCDC was helping with small business development and training for timber industry workers displaced by the expansion of Redwood National Park.

Kelly spent her first year on the job doing research, meeting local farmers and looking at other farmers' markets around the state. The end goal: Establish a local certified market.

"The idea of a certified market is that you sell only what you've grown yourself," she explained. "It had nothing to do with organic, it was to certify that the seller was the grower."

While there were a number of roadside produce stands around Humboldt County in the mid-’70s, there was no central marketplace for growers. She had to sell the idea to the farmers, many of whom already had wholesale contracts for their produce.

"Originally the benefit to the farmers was to be able to sell things that didn't fit standard pack," she said. "Things like tomatoes, apples and lettuce all had to be the same size without blemishes. This was not necessarily substandard [produce], but it wasn't uniform."

While Kelly was working on the sales side, another part of the RCDC grant was aimed at bringing in new farmers by determining what crops were best suited to the Humboldt climate. That parallel project led to the formation of the North Coast Growers Association, which at the time was not directly connected to the farmers' market.

The first season the market ran Saturdays in Old Town Eureka across from the Waterfront Restaurant. "It was a challenge," said Kelly. "It took a couple of years to convince the Old Town merchants that this would be beneficial. There was apprehension. They weren't sure they wanted this going on, or in their neighborhood. They thought it would have a negative effect on their business. Luckily we had some strong support from people like Bonnie Gool and Norton Steenfott."

From the beginning the market was phenomenally successful with the public. "We started some time in mid-June. We had about seven growers. The reception was extremely positive: We'd planned to be open for about five hours, but we sold out in the first three or four. We had to modify our hours after that."

Eventually the market outgrew the space in Old Town and relocated to Arcata, just off the Plaza, then it made the leap to the Plaza itself. As the market grew, the studies generated by the other part of the grant worked as planned and Humboldt's small-scale farm business grew as well.

"There were more areas opening up to agriculture," said Kelly. "Most of what's going on in Orleans now was getting started -- aside from some peach growers and a melon farm, there wasn't much up there in the beginning. A lot of the agriculture was in south county [around Shively and Phillipsville] but as people read the reports from the other group, more crops were grown inland and elsewhere."

Kelly couldn't recall all of the original batch of farmers from the first year, but she remembers Chuck Dwelly, who grew artichokes; Howard Rockwood and the Sarvinskis, all from the Shively/Phillipsville area; and Vernon Young of Young's Orchard in Willow Creek. The Saturday I asked around the market, the consensus was that Denis Potter is the last of the originals.

"Our first commercial crop was snow peas. That was in 1977," Potter recalled. "We don't do those any more. That was the year I learned two important things: patience and diversification. Snow peas were pretty much all we had. We had a customer who told us they could take 200 pounds a week, but by the time they got to around 50, that was it. We ended up with a whole lot of snow peas we didn't know what to do with."

After that Potter's Produce expanded its line to include much of what they sell today: squashes, beans and cucumbers of different varieties. "At one point we were up to around 21 acres. Our primary market then was stores and restaurants. We tried to keep it so that no customer was more than 10 percent of our business, and that's what the Farmers' Market was. It's been a great venue and it's fun to deal directly with the customers and not just stores."

As if on cue, a dreadlocked woman interrupted us asking if Potter's lemon cucumbers are organic. "These are," he told her. "I can't say they're organic because I'm not certified, but nothing unusual has been done -- no pesticides at all."

As their conversation continued (and a sale was made) I thought back to something food activist/author Raj Patel told me when I spoke with him in the spring. (See "Why Does Food Cost More?" April 27.)

"One of the best ways to make a connection with your food is by talking to the people who grew it. You can only do that in a farmers' market ... How was this grown? Where was it grown? ... Those are questions you can't ask at the supermarket check-out."

My suggestion: After you ask your questions, tell the farmers thanks for the work they do. And this Saturday at the Arcata Farmers' Market, stop by Seaside Herbs and thank Marilyn for the work she did getting the whole thing rolling.