Fat Anne's and Manzanilla Pop Up and Hit the Road 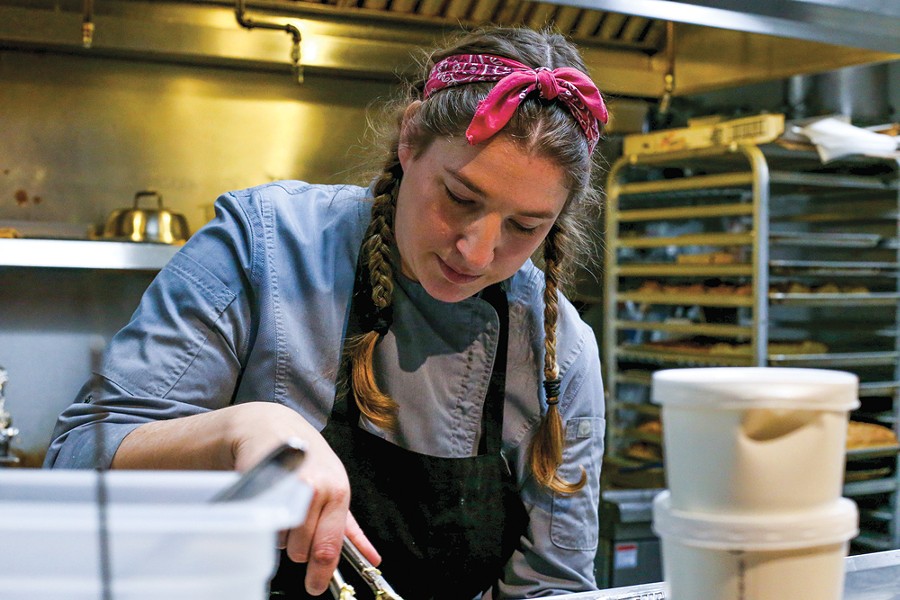 Photo by Jennifer Fumiko Cahill David Velasco on his first day selling out of the Manzanilla truck.

Tevyn Fisher had only been serving breakfast, lunch and dinner at Fat Anne's Bakery & Bistro for three months at her then new Ferndale location when lockdown hit. She shifted to takeout family dinners of fried chicken and seafood boils, which were popular, and happily transitioned back to dine-in, both in the dining room and outdoor beer garden, when restrictions lifted in spring of 2021. But nearly a year later, she's trying something new. "With COVID, if you haven't changed your business model by now, you probably should," she says.

The ups and down of Delta and Omicron have hit restaurants already reeling from the effects of COVID-19 and its attending restrictions. Closures due to regulations or illness on staff, the tightened margins of takeout, supply problems, fewer patrons dining out and more have caused some to reinvent themselves as smaller and more flexible operations in order to survive. For Fat Anne's Bakery & Bistro and Manzanilla, formerly in Eureka, that has meant reinvention in place and on wheels.

"I kept going back to I just don't want to let it go," says Fisher, who wasn't ready to shut down the dream restaurant she'd decorated with her grandmother's recipes. Once the beer garden patio was finished, she'd gotten offers to rent it for events. And as someone who loves to throw a party — her Mardi Gras celebrations with zydeco bands and crawfish night at the Humboldt County Fair have all been packed — she reimagined Fat Anne's as a place to host events. "I feel like there's a market for a small venue with a caterer built in." So far, bookings through October for the space, which seats 65 inside and another 20 outside, have borne that hypothesis out.

While Fisher specializes in New Orleans-style comfort food with local ingredients, she works out custom menus with a broad range of cuisines for clients. And she'll still be cooking to her own tastes at pop-up events, as she did on Valentine's Day, with prime rib and buttermilk fried chicken at the restaurant for one night only. The irony of a pop-up in your own brick-and-mortar place is not lost on Fisher, who says she's working on explaining the hybrid business model to people. She's done a brunch, too, at which the kitchen turned out 180 meals, and hopes to open the doors for pop-ups monthly. A March 1 Mardi Gras crawfish boil is already on the books, "complete with a king cake and a baby."

Fat Anne's already has off-site catering down, even off grid with its own generators. And Fisher, who says she never wanted a food truck before, recently bought one from Main Squeeze just down the road. Her hope, once it's repainted, is to sell fried chicken sandwiches, shrimp and grits, and gumbo out of it during the week, when she's not catering. And, because she loves a party, maybe a food truck rally in the summer. The usual trajectory is from food truck to restaurant, "But we're doing the complete opposite," she says. And she's not alone.

David Velasco was busy on Valentine's Day, too, getting one last health inspection before opening his Manzanilla truck for business in the lot on Seventh Street between H and I streets in Arcata. By mid-afternoon, the shiny, 12-foot, white truck with the chamomile flower logo was passing steaming South American arepas and gyros with thick slices of meat and minty tzatziki sauce through its window to customers.

The Eureka restaurant where the front window still bears that logo closed about six months ago due to COVID, says Velasco. Before that, when the weekend weather was good, there were frequently diners at tables in the adjacent lot, eating brunch in the sun. Later, a tent in the lot covered a handful of tables. But it wasn't enough to make the restaurant work financially.

As excited as he is about the mobile version of his vision, Velasco missed the place. "I wanna say it's more fun, you know running the restaurant because of the space ... you cannot do the same thing in a food truck," he says. "But it's expensive." Just rent and utilities ran roughly $5,000 per month. Between those costs, staffing and other expenses, he estimates he's saving $6,000 a month in overhead working out of the truck he bought from his old boss at the former Fregoso's, renting lot space and prepping in the commercial kitchen at Arcata Kitchen.

The menu, while pared down, hits the same notes as the original Manzanilla, which Velasco describes as "Mediterranean and Latino cuisine — lots of flavors ... it's gonna be pulled pork, sofrito, gyros ... bold flavors." The difference is in the grab-and-go presentation. "The concept is gonna be make your own sandwich," on homemade flatbread, pitas or cornmeal arepas warmed in a countertop propane oven that resembles something between a tiny UFO and a 1970s metal fireplace. Tucked inside are the fillings of your choice, including smoked brisket, grilled chicken, falafel and jackfruit sofrito, along with sauces ranging from tomatillo chimichurri and basil tahini to harissa aioli and pineapple habanero.

"We're gonna try to have tables and a little tent so people can sit and eat," says Velasco with a broad smile. He's also talking to some other folks about renting space in their lots. It's not the tall ceilings, white tablecloths and oven he had in Eureka. But after 15 years working in the restaurant business, it's still his own and that means something.