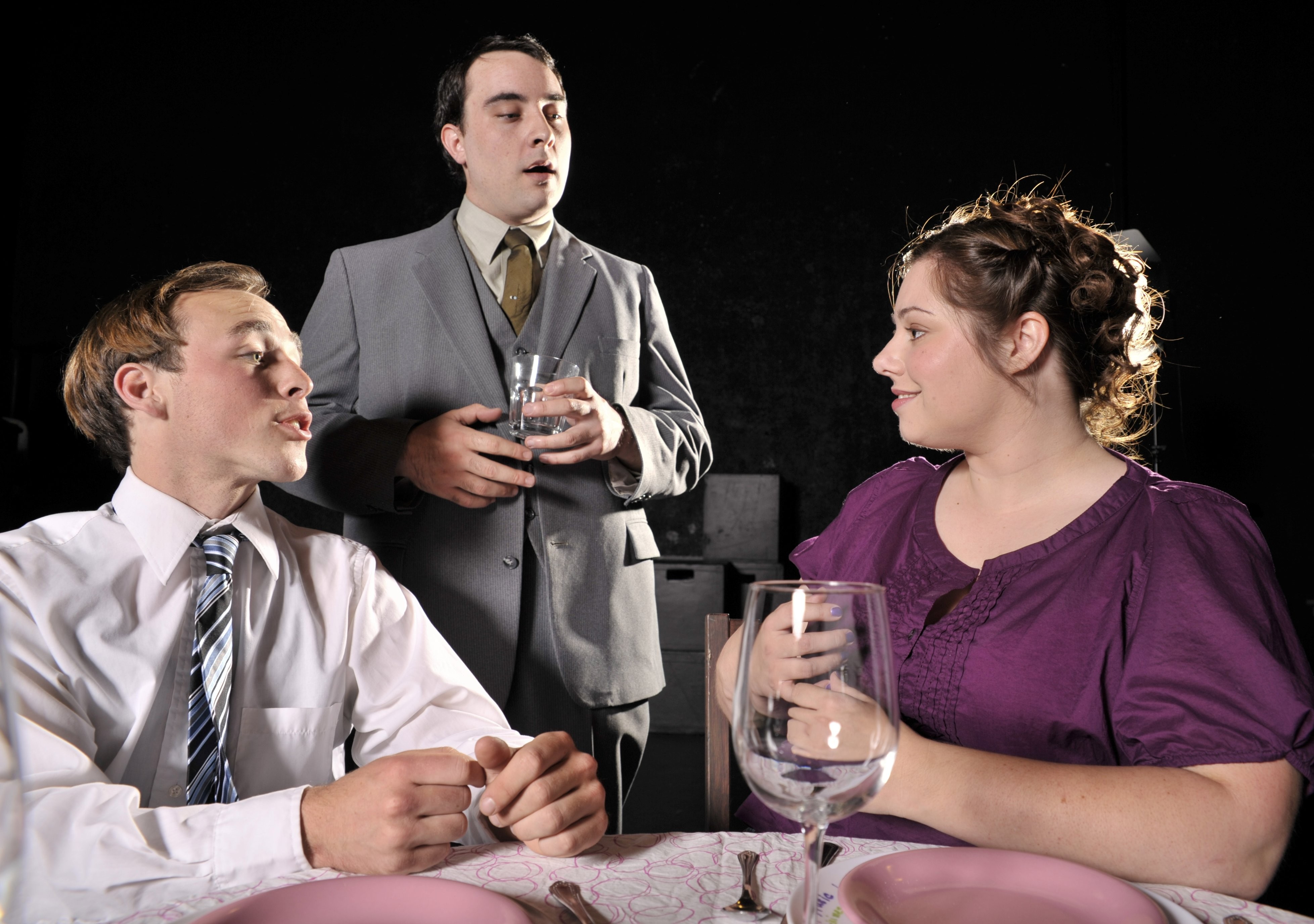 Life is riddled with awkward moments and seemingly unavoidable, uncomfortable situations. We've all experienced instances when we can't make eye contact, or worse, can't look away. Modern entertainment has latched onto this aspect of human interaction, and has made it a mainstay for every genre in every medium. Audiences want drama and comedy to echo real life in an entertaining way, and entertainment does its best to deliver. Neil LaBute has found his cozy place in this niche. As a playwright and a screenwriter, he thrives on exposing the worst side of people. Indeed, his characters' worst sides are often their only sides.

Fat Pig exemplifies LaBute's style of extreme realism. The show features a cast of four characters, each raw and exposed. Tom is your classically average, young professional whose sense of self-worth doesn't seem to extend past his most immediate personal interaction. Helen (the unfortunate title character) is an overweight librarian with a lively spark that is greatly overshadowed by her constant self-deprecation. The two stumble their way through their first interaction, both visibly surprised by their shared attraction and interest. Tom gets her number, and the story starts. As Tom pursues his relationship with Helen, he struggles to hide it from the other two characters. Carter, a coworker and general annoyance for Tom, intrudes at every possible moment with shallow and crass statements, while prying at Tom's personal life with reckless disregard for anyone's feelings. Jeannie is another of Tom's co-workers, with the added twist of being his former love interest. Jeannie is constantly teetering on the brink of an accusation, with manic energy and narcissism as the main features of her arsenal. Tom's effort to hide his relationship from Jeannie and Carter is doomed from the onset, and he soon is forced to decide if peer pressure is more important than happiness.

In essence, this is an intimate show. LaBute is showing us an unflinching view of lies and integrity, and he is presenting it one intimate conversation at a time. I had hoped the small size of The Gist Hall would emphasize this intimacy; however, the performance fell short of intimacy, barely reaching the plateau of empathy or relatability.

Colleen Lacy played the role of Helen with an energy and exuberance fitting the character. Kyle Ryan's portrayal of Tom was earnest, but forced at moments. Save for the interactions between Helen and Tom, Ryan never seemed completely comfortable in the role. Brandon McDaniel had brief moments of dimension as Carter, but ultimately fell short of the exuberance the character requires. It is hard to tell if this is result of McDaniel's abilities, or of the dynamics of his interactions with Ryan's oddly paced portrayal of Tom. McDaniel's portrayal of Carter, though muted, was believable and genuine.

This leaves only the performance of Danielle Cichon as Jeannie. Jeannie is definitely the most volatile of the four, and the character is quick to demand the attention of the audience, as well as everyone else on stage. Both of these characteristics seemed completely lost on Cichon, who seemed to focus more on enunciation than emotion. As emotions and tensions increased, Cichon seemed to only alter the volume of her voice. Her performance was emotionless and flat, and this was exacerbated by Ryan and McDaniel's reactions to her character's rants.

Even with a vastly different dynamic from another set of actors, it's hard to say if the show could really deliver the message LaBute is trying to send. This is partly due to his thinly written characters and allusion-filled dialogue, and also due to the director's choice of movement within the confines of LaBute's words and themes. Generally, my hat goes off to Michael Thomas, but in the case of Fat Pig, Thomas' directorial choices emphasized the flatness of the characters, and vice versa. LaBute relies almost completely on dialogue to drive his point. Each setting and scenario is bland in its construction, as though he chose locations out of a hat. Surely LaBute was aiming for simplicity, but instead he created stagnation. Thomas' choices within these environments were equally lackluster; there was very little movement in any scene.

LaBute's characters are hardly deep or multi-faceted, save for Helen. Helen is the only character in the play able to evoke empathy, and she is the sole possessor of any truly redeeming qualities. When all is said and done, hers is the only character who may truly be affected or changed by the events of the play. Colleen Lacy captured this perfectly. Lacy played Helen with an open vulnerability, capturing small nuances which deepened the character. The final scene of the play epitomizes these nuances, as we watch Helen react to Tom in near silence. The final scene is the shining moment for Ryan as well. It comes across as the most genuine moment of the entire show. Which really only leaves you wondering what could have been, in regards to the rest of the play.