Plus: Too much to do on a Friday and a gift idea 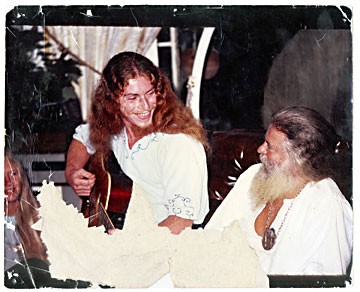 The epic story begins on the Fourth of July, goes to Hollywood, on to Hawaii, expands from there with chapters here and there including a chapter unwritten that takes place in Arcata next Wednesday, Dec. 17, as a proto-psychedelic band called YaHoWha 13 comes to town for a show at Humboldt Brews.

On July 4, 1922 a man named Jim Baker was born. No, not Tammy's husband the televangelist (two Ks there). This Jim B. was a decorated WW II Marine, then in the ’50s became a Vedantic monk. He came to L.A. looking for a movie job, studied yoga with Yogi Bhajan and hung out on L.A. beaches with Gypsy Boots and the Nature Boys. Eventually he became a successful entrepreneur running a series of SoCal vegetarian restaurants, most famously, one in Hollywood called The Source.

In the psychedelic ’60s he became Father Yod, bearded patriarch of a hippie clan whose members renounced their possessions to work at The Source. The family lived communally in a Hollywood Hills mansion where they practiced yoga and tantric sex and, at times, made music together, wild experimental music often with Father Yod supplying chanted vocals and playing tympani or gong. The band was called YaHoWha 13, a name steeped with meaning.

"It was the dawning of the Age of Aquarius," as one of Father Yod's many wives sang when she was in a production of Hair at the Aquarius Theater in L.A. And the family took that literally, adopting the name Aquarian, as Djin Aquarian, guitarist for YaHoWha 13 explained when he called from Mt. Shasta where he currently teaches Kabbalah and earns his living as a carpenter.

"Every day, every morning Father led us through [yoga] practices," Djin recalled. "He was remaking us. Health was our main focus at the beginning; health and doing everything as naturally as possible ... We made music after we did our morning regime: getting our vibrations set, doing our calisthenics and our yoga and breathing. We tuned into the spirit first, then when the music came, it was in a sense a ceremonial, symbolic way of presenting the energies of that day. Over a couple of years we recorded about 65 albums on tape."

The music is hard to pigeonhole: spacy, experimental, definitely psychedelic, but not like the blues/rock-based psyche-jams of the time.

"All the music we made with Father and the YaHoWha 13 band is channeled," said Djin. "We don't call it jamming. We're more sensitized to something coming through us: pauses, changes, up and downs, ins and outs, different moods and feelings."

Between 1973 and ’74, nine records came out of the sessions in The Source's garage/music studio. They were DIY affairs, pressed in editions of 500 or 1,000 and sold at a bookstore associated with The Source. Decades later they would become sought-after collectors' items.

The year 1974 was also when Father Yod took the name Ya Ho Wha. "It's a Hebrew word," Djin explained. "It is the name of God, which is forbidden for Jewish people to utter ... It's the Yahweh Jehovah name, the key to all metaphysics ... Literally, what the Ya Ho Wha name means, it's the conjugation of the verb is: is, was, will be. So, to be, to have been and to be in the future is all that it means. It represents the eternal laws of the Universe. It's everything that is. Father called himself that, he did so as a statement that there are no separated who's in this world. We're all just one gigantic being. He also said, 'All of my children are Ya Ho Wha as well.' It's just a way of saying we are all one."

By 1975, Father and family had moved to Hawaii. That summer Yod left the mortal plane after a hang-gliding accident. Before long the family dispersed. Fast forward a few decades and you find YaHoWha 13 in the midst of a revival. Reassembled in association with the release of a book about Father Yod and The Source, they've recorded a new album, Sonic Portation, for MVD, and resurrected a lost tape for a Drag City disc, Songs From The Source. Next week for the first time ever the band is doing a West Coast tour. "It's amazing," said Djin. "We're all 60 or older. I guess we'll see what happens." YaHoWha 13 plays Wednesday, Dec. 17, at Humboldt Brews. Be there. Or catch them earlier that day (3-ish) during Fogou on KHSU.

Remember last summer when Duckmandu (aka Aaron Seeman of Fishtank Ensemble) brought Monsters of the Accordion to SoHum? This week Aaron is back with Monsters of Shamisen, three guys (two from Fishtank) who play Tsugaru shamisen, a Japanese instrument that's akin to a banjo. Masahiro Nitta is a modern master from Japan; Kevin Kmetz and Mike Penny both use it in Fishtank's wild Balkan/Gypsy hybrid. MoS folds trad Japanese, bluegrass, Celtic music and Fishy alt. East-Euro into a tasty mix. Added bonus: Duckmandu will be there with his accordion, joining forces with Penny on shamisen in Shamalamacord, a Fellini-esque mash-up of all of the above. Catch them Thursday at the Garberville Civic Club or Friday at Muddy's Hot Cup.

Elsewhere Friday, the Red Fox Tavern has How The Grouch Stole Christmas!, an evening of underground hip hop featuring The Grouch and Eligh from Living Legends, plus Distant Relatives, DJ Fresh, The Bayliens and Paul Dateh.

The Grouch comes bearing gifts: songs from his latest, Show You the World, a mostly laid-back set of rhymes including (my fave) "Artsy," a gentle poke at everyone from those who drive hybrids to the guy with "sideburns and a vintage T" and the "trendy lesbian dreadlocked thesbian." He figures, "You ain't artsier then me."

"It's really about everybody," said Grouch, calling from Hawaii, where's he's currently living with his wife and their darling two-year-old. "Whatever the genre, whether you're at the gym and you think you've got the coolest exercise clothes, or you're in hip hop and think you're the best DJ with the cool needles on your turntables -- it's about anyone who thinks they're the coolest. So many people think that way that almost everybody can relate to it." Is he cool? "Of course. A lot of it's about me."

Way too much going on on Friday: Bloco Firmeza brings its samba drumline to Humboldt Brews with special guest Ishi Dube plus Madi's new band, Synergy. Wolf's Silent Giants are at Mosgo's; Peace-of-Mind Orchestra and Speakeasy Saints at the Jambalaya. The Arcata Interfaith Gospel Choir has a holiday thing at Arcata Presbyterian that night (and at First Methodist in Eureka Saturday). L'Orchidée d'Hawaï, jeunes et puissants (young and powerful) garage/surf/rockers from Chambéry, Rhône-Alpes, France play Friday at a house show somewhere in Arcata. (That's all I can say.)

"Poetry will get you through times of no money better than money will get you through times of no poetry," writes unofficial local poet laureate Jerry Martien, borrowing (with due credit) from Freewheelin' Frank in an announcement of an "early recession winter reading" Sunday, Dec. 14, at 3 Foods with Jerry, bassist Shao Way Wu, and " fisher poet" Joanna Reichhold. "food at 5 / poetry and music at 6 / all at the bailout price of $5," writes the poet, in almost free verse.

The Sunday, Dec. 14, club listing for Six Rivers Brewery was intriguing, promising "Moonshine & The band formerly known as The Hitch." Intriguing, since I know The Hitch has parted ways (amicably), members forming several other bands, and fans have petitioned for a reunion. I sent an inquiry to ex-Hitch drummer Steve Bohner who told me, "It has nothing to do with The Hitch except I used to play drums in that band. Magnum [the metal-ish band actually playing Sunday] is more a spin off of Sad Wings of Destiny."

The Hitch is one of 22 local bands on Meth Bog Records' recently released album, Making Blindness Fashionable 2008, proceeds of which benefit the Humboldt Council of the Blind. You'll also find cuts by The Fire Demons and Machete, two other bands that might erroneously be described as "formerly known as The Hitch" (having ex-members). There's much more to say about the comp, but I'm outta room (’til next week) so let's just say it'll make a perfect holiday gift for some cool/artsy scenster on your list.