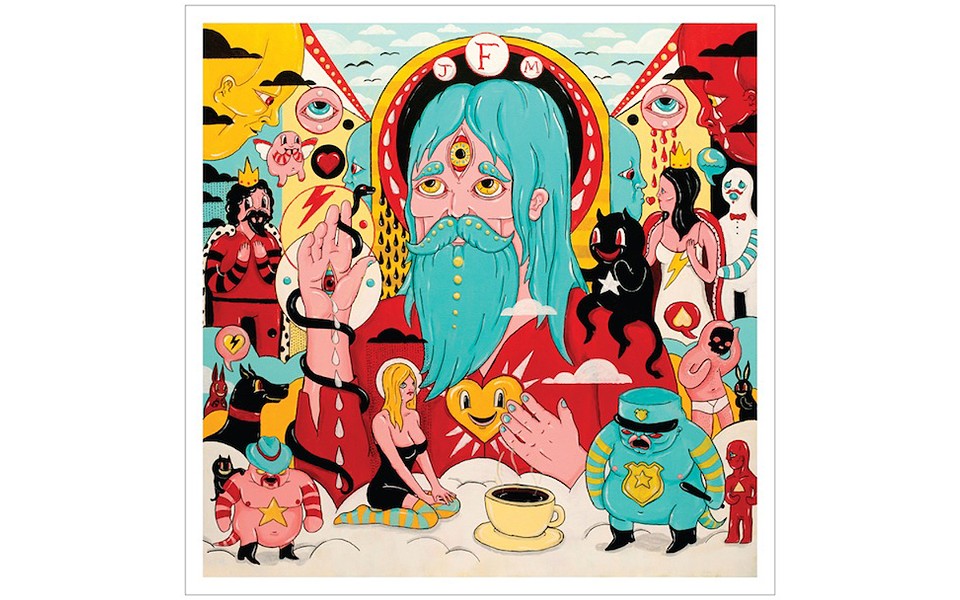 It is no secret that Los Angeles has been a breeding ground for fantasy and tragedy, creating the mythos of the "beautiful loser" character, treading water amid industry, delusion and artificial props, all spread across a vast desert landscape. Author Nathaniel West captured the sense of desolation past the hues of Hollywood in his slim, brilliant novel of 1930s LA, Miss Lonelyhearts. Its narrator, a downtrodden journalist, agrees to write an advice column and gets caught in the downward swirl of overwhelming (and extreme) pleas for help and validity. It's from this sort of viewpoint that many songwriters have experienced LA, including Leonard Cohen, Neil Young, Gram Parsons, Randy Newman and Harry Nilsson.

Josh Tillman, former drummer and vocalist for Fleet Foxes, has now released his seventh full-length solo effort, Fear Fun, under the alias Father John Misty. Musically, it's an expansion from the bleakness that defined his work released as "J. Tillman," while lyrically he retains the dark cloud hovering over his narrators. Having left Fleet Foxes in 2011, Tillman couch-surfed around Los Angeles absorbing the mythic "beautiful loser" narration. "Joseph Campbell and The Rolling Stones couldn't give a myth, so I had to write my own," he sings in "Everyman Needs a Companion," a composition strikingly reminiscent of Harry Nilsson's "Don't Forget Me."

Tillman maintains a musical association with Fleet Foxes, often employing cascading harmonies, but he fully adopts specific Laurel Canyon influences, namely Neil Young (his darker side), while including Gram Parsons, The Beatles, John Lennon's solo work, and above all, the aforementioned Nilsson, whose use of ironic humor Tillman can easily relate to.

The country-pop swing of "Misty's Nightmares 1 & 2" captures Nilsson-style dark humor under a loose, upbeat hootenanny arrangement. On the elegant "Nancy From Now On," Tillman ingeniously blends Nilsson and John Lennon (infamous LA partying partners in the early ‘70s) in an unusual way. He takes a Nilsson-like melody line and combines it with a latter-day Lennon sound (Double Fantasy) -- and it works brilliantly. The Beatles' psychedelic influence looms prominently over "This is Sally Hatchet." In "Tee Pees 1-12," Tillman borrows from Gram Parsons to color his narration of love and spirit gone awry and "drinking greyhounds way below the ground."