Inside the courtroom at the Ferndale Rep and North Coast Prep 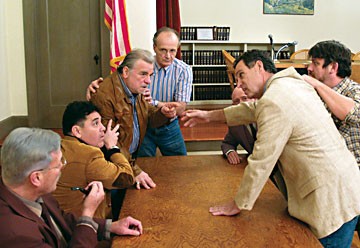 Two things occurred to me before I saw 12 Angry Men at the Ferndale Repertory Theatre. First, that once you find yourself in the jury pool in Humboldt County you can pretty much count on getting called to the court house every damn year. That doesn't happen everywhere. So some sizeable proportion of those seeing this play — which dramatizes a jury's deliberation — may be in a position to compare it to their own experiences.

Second, I thought about this play's author, Reginald Rose, one of TV's first serious writers. Though its most famous incarnation was the 1957 feature film starring Henry Fonda, this story started out as a television play in 1954 for the classic showcase Studio One. Rose also created and wrote for the television series The Defenders in the early 1960s, with defense attorneys as heroes. There were other dramas on TV then that championed constitutional protections and the rights of the accused — The Law and Mr. Jones was my other favorite — but that point of view has largely been absent from TV for decades. The cop shows, the Law and Order-style dramas, all demonize defendants and defense attorneys, as do the crime-obsessed non-fiction series, the cops and prisons "reality" shows and "documentaries." Except for Alan Shore's closing arguments on Boston Legal, we never see defendant's rights defended, and since many of his clients are pretty odd, today's TV audiences seldom see themselves in the accused.

So that's some of what audiences might bring to this stage version of 12 Angry Men, in which a jury deals with what seems like an open and shut murder case, except for a lone juror who doesn't agree. The movement of jurors back and forth on a question that, when answered, decides the freedom or the execution of another human being is the potent dramatic material. The lives and psychologies of the jurors become as important as the facts of the case.

Director Gene Cole has assembled a worthy cast, all of whom fully inhabit their roles even when they don't have a lot to do. That's important because, unlike television and film, a stage play doesn't have a lot of close-ups. Bill Cose has the unenviable task of the Henry Fonda role (for which the American Film Institute named Fonda as the greatest movie hero of the 20th century). He approaches it with Fondaesque modesty, and though his later assertiveness isn't quite as convincing he is perhaps a more believable juror.

Victor Howard as the juror most intent on a guilty verdict is inspired casting — he is younger and more physical than has been usual in the various screen and stage productions. He brings an energy and conviction that maintain the tension, though his motives are less clear than this character expressed in the movie.

Ellsworth Pence as the affluent, rationalist stockbroker keeps the play in balance. Albert Martinez and Bob Clark are especially watchable — and recognizable — in their roles, but everyone is credible, keeping you in the story. Those who know the movie version will recall the growing claustrophobic feeling induced by tight camera shots. Perhaps Rose depended on that, and that's why the second act loses some of the dramatic shape of the first act. But it might be even more realistic this way.

This Ferndale production makes for an absorbing evening of theatre for any audience, but I suspect ex-jurors will be especially taken by its durable realism. As many times as I've endured long mornings of jury selection, I've been on a jury only once. (My record of advocacy against the recall of District Attorney Gallegos usually got me excused.) I can testify that opinions can indeed swing back and forth, and emotions can run high in the jury room, even when the stakes are relatively minor, as in my one trial. Still, I will remember the man next to me pounding his fist on the jury room table and shouting into my face, impressing me with the fact that he was a head taller and 100 pounds heavier. (Channeling my inner Fonda, I was unmoved.) Imagine my surprise when I saw him again on a local stage, as an actor with a small role (though not in this play). I wonder, should I have recused myself from reviewing that show?

This play about the Witch Trials in colonial New England is famous as an allegory of 1950s McCarthyism, but in 2008 it has equally relevant resonance. Miller deftly layers the practical reasons why Salem townspeople want to demonize each other, and later why they need to pull back from a community in chaos. But Miller's emphasis is on that particular hormone-fueled mixture of fear and ecstasy known as hysteria.

Hysteria in this sense knows no gender, but it certainly is expressed with chilling power by a set of screaming adolescent girls, who mesmerize the court with their "ability" to see Satan. Though the play suggests the role of Puritanical repression, it doesn't depend on it — there are all kinds of repressions in our "permissive" society. We can even see a template for this kind of hysteria in the national response to terrorism, and a similar exploitation of it by authorities.

After laying the groundwork in the first act, this production gathered force for a superior second act. Overall the presentation (directed by Jean Bazemore) was clear and thoughtful, with many fine performances. I have room to name just a few: Chisa Hughes was daunting as Abigail Williams, the leader of the witch-finding girls; Elena Tessler was a convincing Tituba; and Dominick Roney fully conveyed the transformation of investigator Reverend Hale from self-righteous to conscience-stricken. While Elijah Singer capably portrayed the moral anguish of John Proctor, Fiona Ryder played Elizabeth Proctor with such depth and nuance that this relatively static character became the still center of the drama.

But what made this show particularly vital for the opening night audience was the evident emotion of this diverse young cast and their deep involvement in the play — a power to communicate that leaped across the stage.

Instead of double-casting roles in one play, North Coast Prep students elected to do two different plays. So this coming weekend another cast performs Shakespeare's Twelfth Night, Thursday (Jan. 31) through Saturday at 8 p.m. in the Gist Hall Theatre.