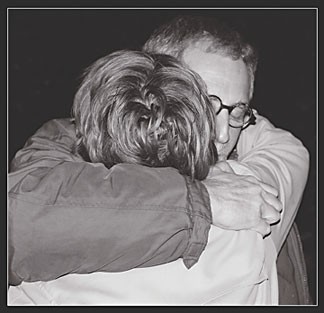 Ferndale therapist Stuart Altschuler got exactly what he wanted for his birthday: On Monday night the Ferndale City Council voted 4-1 to approve a home occupation permit for his psychotherapy office.

That permit has been at the center of a four-month debacle involving Altschuler, his neighbor Shannon Leonardo and Shannon's uncle Rich Leonardo, who questioned Altschuler about his homosexuality at a Ferndale City Council meeting last fall.

The city's planning commission approved Altschuler's home occupation permit for a psychotherapy office in September of last year, but Shannon Leonardo later appealed that decision. The appeal was upheld by a 3-2 vote of the city council in November. The Leonardos greeted that evening's vote in their favor with a whooping cheer. A stunned Altschuler, armed with a lawyer, put his nose to the grindstone and has since spent $3,000 in legal fees to get a permit that should have been routine.

Altschuler isn't the only person who's caught flack from all of this. After the now notorious City Council meeting in October, when comments made by Rich Leonardo were interpreted by many as being homophobic, Ferndale Enterprise publisher Caroline Titus took Leonardo to task over his behavior. Leonardo eventually stepped down from his position as volunteer fire chief.

Even after the appeal was upheld by the City Council and Altschuler was denied his permit, the nasty calls kept coming, Titus said in her office on Monday. With a trembling hand, she played a saved phone message from Christmas Eve: "I hope you have a merry Christmas ... Next year won't be so happy ... Enjoy, you fucking cunt!" That was followed by hysterical laughter, like something you'd expect to hear in a creepy horror flick.

Before Titus got involved in this issue, she never locked her doors -- now she does. She's relocated her office. And she's learned first-hand how difficult it is to run a small paper in an even smaller town when you write hard-hitting editorials about a pillar of the community.

"This has been life-changing for me," she said. "Friends have changed. I never thought about gay rights before ... I had never witnessed personally another human being discriminated against in such a vile manner."

Monday night's City Council meeting was a quick affair, as the home occupation permit was not open for public comment. Each councilman explained why he was voting the way he was. Mayor Jeff Farley used the city's general plan to argue that he couldn't approve of a business in a residential area. As for the two other councilmen who had previously voted to deny the permit -- Ken Mierzwa and Michael Moreland -- they admitted that the general plan is ambiguous and needs reworking, but that based on the present version and on past home occupation permits approved by the city they couldn't conscionably deny Altschuler now.

Atlschuler's victory was greeted by silent relief from the crowd. No cheering. Very few people -- most of whom appeared to be there for the permit issue -- just got up and left after the vote. Instead, they made their way outside one-by-one or in pairs, quietly.

Altschuler had been prepared to take the city to court in the event they denied him the permit again. As for how he's been treated over the past four months, he says he's suffered neither threats nor harassment. And the community has been overwhelmingly supportive. He doesn't regret even for a second having moved to Ferndale, no matter how Victorian it has proved to be.

"It just feels like everything has been swirling around me but not through me," he said.

Standing in his newly remodeled kitchen, wearing what seems to be his trademark flannel shirt and tortoise-shelled glasses, Altschuler was, more than anything, ready to get to work. And now, with his new birthday gift, he can do just that.