Seussical the Musical at FRT 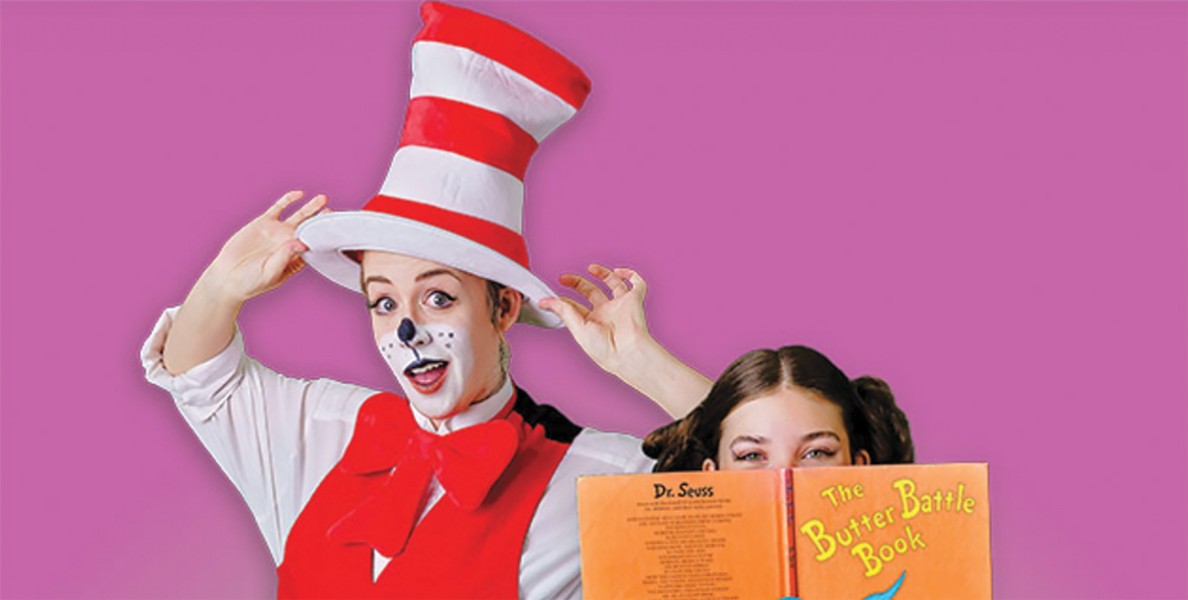 Photo via Ferndalerep.org Caroline Needham and Alexandra Nilsen in Seussical the Musical.

Wading through the gaggle of eager children and on-the-precipice-of-composed parents for Ferndale Repertory Theatre's Seussical the Musical is part of the joy and laughter of this production. A newcomer to town may have thought the entire city in cahoots with the theatre to set the perfect scene for the Whos to peek around the alley or the Grinch to thieve the multiple lighted trees along the main drag. Alas, the marching single file schoolkids filled with awe at the town's cute window displays and candy cane streetlamps are a coincidental preshow to this storybook production.

Bravo to scenic designer Carin Billings for recreating a Seuss fantasy that spills into the house with mobiles hanging throughout. The transition from the sweetness of Ferndale to the vibrance of their art perfectly establishes the world. Sound designer Dillion Savage enhances it with expertly chosen preshow music played over FRT's brand new sound system. The pairing, sprinkled with children's frivolity, popcorn popping and the lingering scents of hot cocoa and apple cider, is orchestrated by the iconic hat center stage and the production's energy.

Jojo (Alexandra Nilsen) utilizes the momentum brilliantly as she invokes The Cat in the Hat (masterfully performed by Caroline Needham) who nimbly (and literally) draws her into the story of an elephant named Horton (Evan Needham) hearing the Whos of Whoville on a speck of dust and vowing to protect their world. Some very naughty monkeys (Roux Kratt, Jeremy Stolp, Sam Pietanza) and an even naughtier Mayzie La Bird (energetically played by Shawn Wagner) try to thwart that plan while a fantastic Gertrude Mcfuzz (praise to Dominica Savant-Bunch) remains loyal to him amid the Seuss-foolery. Add some Whoville drama with Mr. and Mrs. Mayor (Mychal Evenson and Cathryn Noel-Veatch, both lovely here), vocals from a Sour Kangaroo (Samahri Brice) that will bring in the new kingdom, a sprinkle of the Grinch (Jeremy Cotton) and the cutest winged pink elephant that elicits a loud "Awww," and you've got yourself a solid production.

Within the expertly cast production's centered characters, the ensemble's ability to exude the energy necessary to keep the focus of the predominantly elementary demographic is impressive. Stolp, Kratt and Pietanza command the stage with their characterized movement and sounds. They're countered by the feathered and elegant movements of Elaine Yslas, Sage Janger and Tori Miller. The juxtaposition of the two triads from co-directors Brad Harrington and Cleo DeOrio made an interesting balance for people who appreciate such forethought. Still, the birds could enhance the energy play with more nuance in their movements to balance the power of the primates. Likewise, the Who townfolk could completely lose themselves in the work. Although I would have liked more complicated and spectacular choreography from DeOrio, seeing the concentration on movement and dance-counts that prevented some of the cast from connecting to the audience was enough to convince me the watered-down version was not only sufficient but strategic. Caroline Needham's movements were straight out of '80s animation. She is joyous in her portrayal of The Cat with angles, Fosse-esque extension and hijinks that foreshadow shenanigans. Even in background moments, she envelopes the stage with her spirit. Evan Needham's Horton provides the grounding the production needs as he breathes humanity (ironically as an elephant) and dramatics into the show. Perhaps a more melodramatic approach would suit children's theater. Still, "Alone in the Universe" and other numbers are breathtaking.

The costume and make up designs by Steph Thomas could have drawn more inspiration from the books as opposed to minimally alluding to the characters. Horton, for example, has no reference that he is an elephant and the actors portraying the monkeys had only poorly constructed ears on stocking caps to read as primate. Likewise, lighting designer Michael Burkhart could have brought more focus to the intricacies of the set and vibrance of the Seuss world. Also, please don't mace the audience with your light design; having to use my program as a visor and audience members shielding the eyes of their children is not a bold choice. Still, there's much to enjoy. See this show!

Ferndale Repertory Theatre's production of Seussical runs through Dec. 18, with shows at 8 p.m. on Fridays and 2 p.m. on Saturdays and Sundays. Call (707) 786-5483 or visit ferndalerep.org.