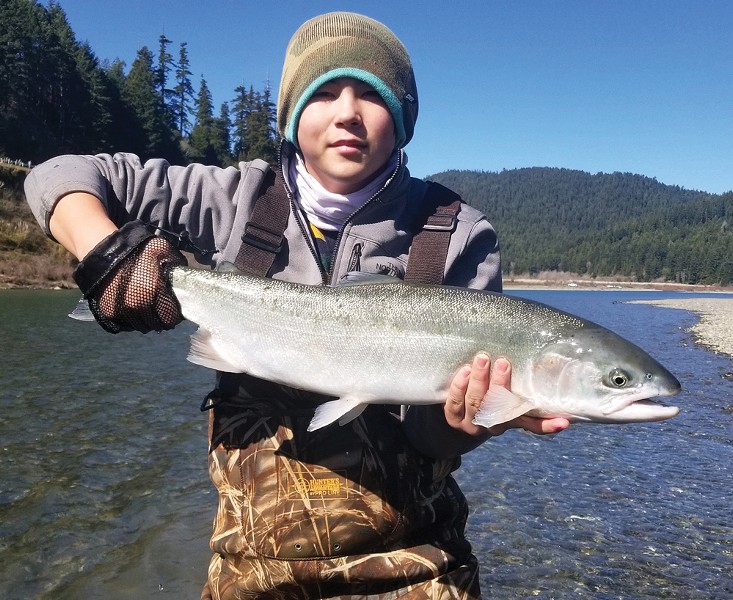 The news wasn't pretty at Thursday's annual Ocean Salmon Information meeting. Not only are the Klamath salmon stocks struggling, the Sacramento stocks took a nosedive, as well. The Klamath River fall Chinook ocean abundance forecast in 2021 is 181,500. This is slightly higher than the 2020 forecast but still well below the long-term average. California Department of Fish and Wildlife hinted there will likely be constraints to fishing opportunities north of Point Arena this season. The real damaging news came from the Sacramento River, where only 271,000 adult fall Chinook are said to be swimming in the ocean. That's some 200,000 fewer salmon than the 2020 forecast. "Klamath River fall Chinook abundance forecasts and spawner returns have been low over the last few years. Fisheries were limited on the northern sections of the California coast last year to reduce impacts on this stock, and that will likely be the case again this year," said Kandice Morgenstern, an environmental scientist with the CDFW's Ocean Salmon Project. "Furthermore, with a reduced abundance forecast for Sacramento River fall Chinook, we could be looking at reduced fishing elsewhere along the coast, as well." What the Pacific Fisheries Management Council chooses to do with these forecasts will be determined in the next couple of months. Up next, the PFMC will meet virtually March 2 through March 5 and March 8 through March 11. Final regulations will be adopted at the April 6 to April 9 and April 12 to April 15 virtual PFMC meeting. Meeting information can be found at: www.pcouncil.org/council-meetings/upcomingmeeting. To view the salmon preseason process, visit www.wildlife.ca.gov/Fishing/Ocean/Regulations/Salmon/preseason.

According to Kathleen Zontos of Eureka's National Weather Service Office, rain is in the forecast for later in the week. "The first system is well defined and will arrive Thursday evening and continue through Saturday morning," said Zontos. "Del Norte could see 2 to 3 inches through Sunday and here locally we can expect 1 to 2 inches. Sunday through Wednesday looks wet as well. I don't think we'll see substantial totals, but it will keep things wet and keep the river levels up. Another system is developing for late next week but there's a lot of uncertainty right now."

The CDFW announced on Monday new freshwater sport fishing regulations that will take effect on March 1, and aim to simplify and streamline the laws regulating inland fishing while maintaining and protecting California's fisheries. The package of updated regulations was adopted by the California Fish and Game Commission in October of 2020. It was the largest regulatory inland sport fishing package in the Commission's history.

CDFW held a series of community meetings in 2018 and 2019 at locations across the state to publicly introduce and discuss proposed changes to simplify statewide inland sport fishing regulations. CDFW proposals and recommendations from the public were then vetted at the January and March 2020 Wildlife Resources Committee meetings.

Anglers should review the changes as they affect most of the inland trout waters in California. Updates to the regulations can be found both at wildlife.ca.gov/Fishing/Inland and wildlife.ca.gov/Regulations.

Calm ocean conditions resulted in very good lingcod and rockfish action Sunday and Monday, reports Andy Martin of Brookings Fishing Charters. "Big swells return this week," said Martin. "The best action is from Twin Rocks to House Rock. Surfperch are biting well at Crissy Field and Lone Ranch State Park, and the fishing pier next to the Coast Guard station in Brookings. Perch fishing will continue to improve in the coming weeks."

"Steelhead fishing was decent early last week on the Chetco but slowed by the weekend with mostly downers being caught," said Andy Martin of Wild Rivers Fishing. "Top boats are getting a fish or two per boat, with many now going fishless. Rain this week could draw in fresh steelhead and flush some of the downers from higher in the system. Although steelhead fishing is open through March on the Chetco, fishing likely will be on the slow side for the rest of the month. Rogue River anglers are hoping this week's rain will bring in the first few spring salmon of the season. Steelhead fishing remains fair, with boaters anchoring and running plugs having the best success. Spring salmon season peaks in late April and early May, but rains in March often bring fishable numbers of springers into the Rogue. The Elk and Sixes are slow for steelhead."

The Smith is currently low and clear, holding at just under 8 feet on the Jed Smith gauge. The fishing remains tough and not a lot of boats are still trying. Most have moved to other rivers. The storm coming later in the week could, however, breathe new life into the river. It's predicted to reach 11 feet early Saturday morning. If there's fish still waiting to come in, this jump should do it. It will also bring down the freshly spawned fish out of the tributaries.

Running at 3,100 cubic feet per second as of Wednesday, the main Eel is in perfect shape. Boats drifting roe or beads are getting one to four fish per trip. There's a mix of fresh steelhead and some downers are starting to show up. Windy conditions are predicted for both Thursday and Friday. Rain is forecast to hit Friday evening, which will blow the river out for the weekend. Flows are forecast to reach 9,000 cfs by Sunday morning

The South Fork was in perfect shape over the weekend, and there was no shortage of boats. Scores ranged from zero to three fish for boats drifting from Benbow to the forks. The rain coming Friday will push the flows to 3,400 cfs on the Miranda gauge. It could fish again by mid-week.

The Van Duzen was flowing at 330 cfs Wednesday and is in perfect condition. Reports have been hard to come by, but plenty of bank anglers are giving it a go. Expect windy conditions Thursday and Friday, followed by rain on Friday night. It's forecast to blow out Saturday with flows reaching 3,700 cfs.

According to Justin Kelly of RMI Outdoors, the river is in perfect shape and holding steady. "Conditions are just about perfect, but there aren't a ton of fish around," said Kelly. "They're definitely scattered, with mostly fresh ones below the hatchery. There's also a few above. It looks like the river will fish through Friday, then blow out on Saturday." The river is predicted to hit 5,500 cfs (10.8 ft.) by Saturday morning.