Why the Broadway classic plays well in Humboldt 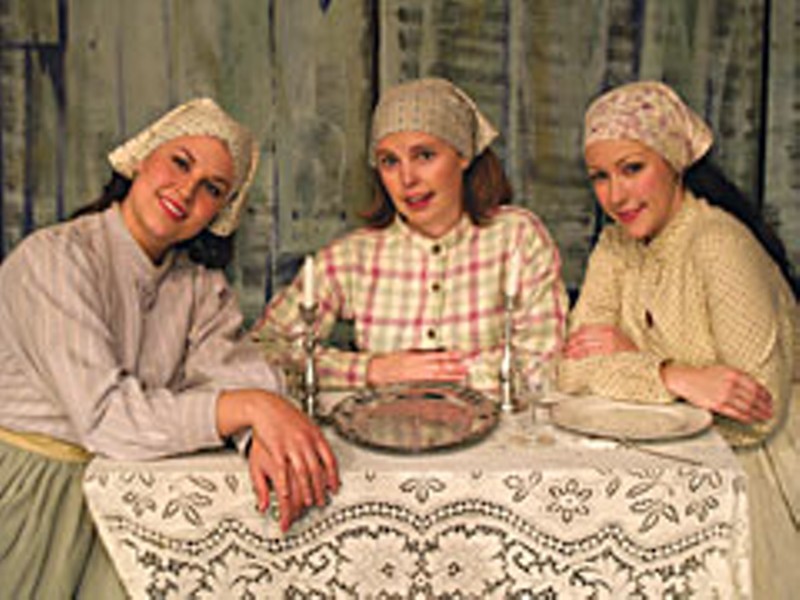 It seems like a long time ago now. Not only the late 19th century, when the tales about Jews in Czarist Russia written by Sholem Aleichem took place, or even 1905, when Fiddler on the Roof (based on those stories) is set. But also the early 1960s, when this musical was created — when several generations of European immigrant families were leaving their ethnic enclaves in cities and towns, and moving into mainstream suburbia. In a way, this voluntary exodus echoed the forced relocations — such as the one haunting this play — that brought many immigrants to America. All kinds of traditions and mores were changing and under attack from prosperity and the beginnings of '60s rebellion, and the infamous Generation Gap. This play's story was as much about the time and place of its first audiences as it was about 1905.

It wasn't too late either for ethnic-based entertainment, so pervasive in the 1950s, to have a last big moment. So Fiddler on the Roof premiered at just the right time — and of course it didn't hurt that it was produced by Hal Prince, directed by Jerome Robbins, with songs by veterans Jerry Bock and Sheldon Harnick, and script by Joseph Stein.

So can it play in 21st century Humboldt County? By now it's a classic, with many of the virtues of the golden age of musicals (some say it was the last of that era.) Generational issues at the heart of the story are perennial, and a local audience can respond to the decidedly non-glitzy, rural town characters. As evidenced by the current production at North Coast Rep, the opening number, with the large cast shouting out "Tradition!" gets the audience to immediately identify with the events on stage. It's a match.

The central character of Tevye, the milkman, was written for the supreme comic skills of Zero Mostel. Perhaps because we usually see Brad Curtis in leading man roles, funny lines at the beginning of the show didn't connect the night I saw it. But his initial stiffness made his singing and movement in the classic "If I Were A Rich Man" song all the more appealing — it's one of the most memorable moments in the show. Curtis' rich, warm voice is superior, both singing and speaking, so as he relaxes into the role, he takes the audience with him.

As his wife Golde, Ariel Graham hits all the right notes, both comic and domestic. (Joe Stein, who authored the play, started out writing for the Sid Caesar TV show, and its easy to see Caesar's favorite partner, Imogene Coca, in this performance.) The Curtis-Graham second act duet, "Do You Love Me?" is another highlight.

Adina Lawson also excels at comedic acting as Yente, the Matchmaker. Denise Blase (with an especially fetching voice), Shaelan Salas, Nanette Vos (also the admirable music director) and Mara Fuller all shine as the daughters of Tevye and Golde, whose marriages form the central action of the story. In fact the whole cast of 38 performs well, under the delightful direction of Dianne Zuleger. Together with Rebecca Rubenstein's choreography, the staging invisibly supports the action — and the "dream" sequence is a special treat.

The fast-moving first act was so involving that when guests at a wedding onstage applauded, so did some of the audience. The second act is more somber and seems less finished, but overall this Fiddler is a resonating success.

It's a Lewis Carroll Christmas! Dell'Arte's holiday show this year is The Hunting of the Snark, an adaptation of the famous Lewis verses. It premieres Friday and Saturday at the Carlo Theatre and moves to various locales for free shows, beginning at the Van Duzer at HSU on Sunday. Schedule and details: dellarte.com.

Ferndale Rep's holiday show for Humboldt elementary schools is The Party, an adaptation by Vicki Young of the Mad Hatter's tea party in Alice in Wonderland, featuring Marilyn McCormick, Renee Grinnell and other Rep stalwarts. It begins December 4. Information on performances at a school near you: 786-5483.

In non-holiday news, the touring Mel Brooks musical, The Producers, is at the Van Duzer Wednesday through Friday, Nov. 28-30, at 8 p.m, via CenterArts: 826-3928, and the production site at producersontour.com.

Beginning on Thursday, Nov. 29, HSU premieresRelative Captivity,a new play by Margaret Thomas Kelso about families of the imprisoned (though there's a country-singing Norse goddess in the mix, too.) Since I'm making those big intermittent part-time hourly worker bucks publicizing this show — and since Margaret is my beloved partner — I can say no more here, but there's info at HSUStage.blogspot.com, and while I bow out for a couple of weeks, I'll be rattling on as usual at stagematters.blogspot.com. Happy Thanksgiving!

To extend the theatrical conversation and expand it beyond the North Coast, I've started a Stage Matters blog, at stagematters.blogspot.com. You can also e-mail me at stagematters@sbcglobal.net.