Fifty Shades Freed is for Masochists

But Peter Rabbit has bounce 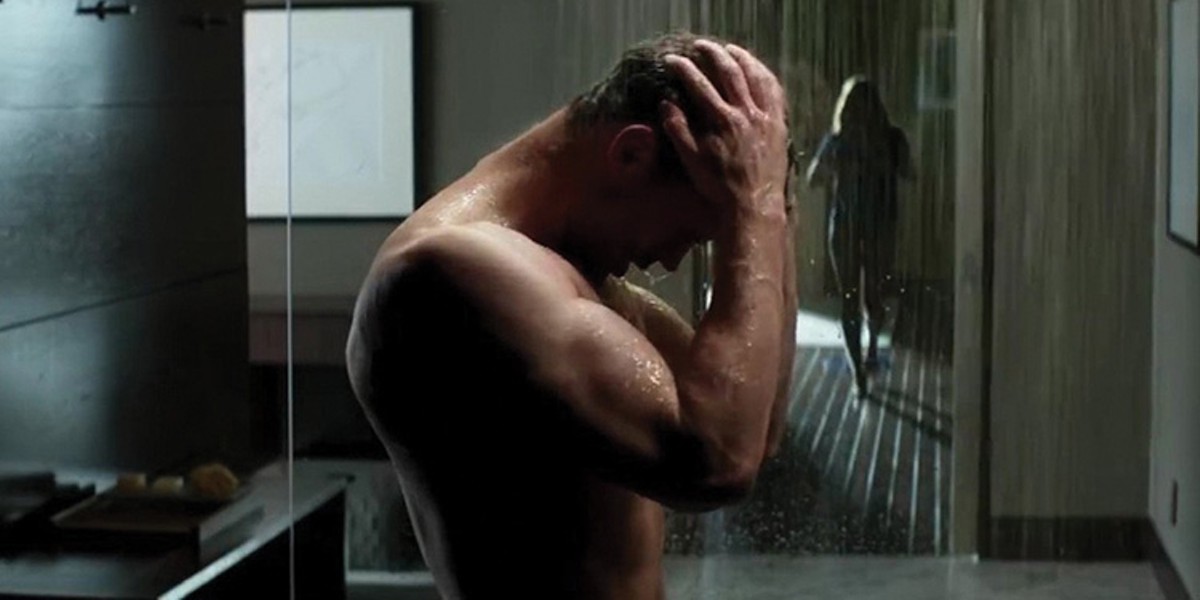 Fifty Shades Freed When she keeps comparing you to amphibian dudes.

FIFTY SHADES FREED. It's been a very long seven years since E.L. James morphed fan-fiction erotica into a three-book, three-movie deal. Since then, the edginess has dulled and the Steele dossier has stolen the thunder of any scandalous stories of kink from the love life of Anastasia Steele. It's not only real life that makes the Fifty Shades of Grey oeuvre, its moody hero and the spotlight it has given one variety of female desire seem passé; even PG13 Hollywood blockbusters have discovered male sexual spectacle. In 2017, director Taika Waititi let the camera linger on Chris Hemsworth's bare-to-the-hip-bones Thor and Wonder Woman's Patty Jenkins gave naked Chris Pine more than a once-over with the female gaze. The question now is: How do you make the straight ladies swoon after they've seen a love scene with an amphibian dude?

Maybe you can't. Maybe all you can do is play to your base like a better dressed, softly lit Trump rally, and finish what you started. Director James Foley and the returning cast go through the motions of Freed's inane plot like partners who know the thrill is gone. But they do come through on the promise of sex scenes. There is yacht sex, luxury car sex, almost shower sex, fancy dungeon sex, sex with handcuffs, sex with toys and sex with food. An hour into the movie, the lady even gets about 12 seconds of oral. If any of that sounds enticing, I suggest you watch it in the privacy of your home, where you can fast forward through any parts that might make you embarrassed, uncomfortable, offended or triggered — by which I mean every moment of acting and dialogue in between.

The movie opens on the wedding of Christian Grey (Jamie Dornan) and his bride Anastasia (Dakota Johnson). After the ceremony, they head off on a Travel Channel montage of romantic locations. But their honeymoon is cut short by news that their personal files have been plundered by the ham-fistedly named Jack Hyde (Eric Johnson), Ana's former boss, who previously tried to blackmail and assault her, and to kill Christian by sabotaging his helicopter. (I can't believe I'm writing these words.) They return to Seattle, where, against the backdrop of their minimalist luxury apartment, they settle into domestic life with the ease of newlyweds who have yet to discuss children or fully disclose their assets. Ana, who is creepily infantilized, bristles at the round-the-clock security and her husband's need to control her, including at her job at the company he owns. When Hyde attempts to kidnap Ana from the apartment at knifepoint, he's subdued by a pair of bodyguards and a thin thriller subplot takes over the weak romantic drama.

It's hard to give a damn about anything that happens in this movie, partly because nobody on screen seems to, not with any real feeling. The Greys treat a dangerous car chase like a game, followed by a brief moment of overwhelm that's squelched by a quickie. For most of the film, Johnson doesn't register much beyond parted lips or a breathy "Oh my god." Dornan, who was terrifying in The Fall, here only poses with a glass of scotch and reads his lines with the conviction of a man with an ironclad contractual obligation. Aside from the sex scenes, which, hey, are convincing (shoutout to Dornan's personal trainer and the makeup people who rendered Johnson's skin as poreless as carved soap) the actors have zero chemistry and one wonders if the rest of the movie might have been as compellingly filmed with paper dolls.

Not that there's much for an actor to dig into. Ana's scenes at work as a fiction editor have all the detail of a tween daydreaming through career day: sipping tea, perching on a couch with a grateful writer and telling a designer to go up two points on the cover font. Even their Big Fight flirts with parody as she stomps in her underwear, defiantly pulling on her stockings and boots. (Who the hell puts on her boots before her dress?) He's jealous and controlling but it's only because he can't lose her, guys. (Friends, if this sounds familiar, dump him/her right goddamn now.) In fact, all their problems come down to Christian loving Ana so much he's scared, or enemies that desire and/or envy them. Jesus, it's boring. Right down to the series highlight reel that takes us to the credits. At the showing I attended, a couple made the bold move of bringing a baby, who made it through most of the humorless affair with only a few gurgles and wails, finally falling apart in the denouement. I've never identified so strongly with a baby or been more grateful for comic relief. R. 101m. BROADWAY, FORTUNA, MILL CREEK.

PETER RABBIT. Cast not your root vegetables at me, Beatrix Potter fans — this live-action/animated comedy was surprisingly entertaining, genuinely sweet and a pleasure to look at. Potter's body of work, written and illustrated, is so iconic that I refuse to believe a playful movie can harm it. If Shakespeare's Twelfth Night can survive She's the Man (2006), The Tale of Peter Rabbit will be fine. And director Will Gluck's Peter Rabbit is that rare thing: a kids' movie that you and the little ones can watch and enjoy without worrying it's turning them into assholes.

After the death of his parents — father in a pie and mother lost to age — Peter (the bouncy James Corden) runs garden heists at McGregor's farm with his siblings. Neighbor Beatrix (Rose Byrne), a flailing abstract painter who does familiar water colors of the animals, protects them like a surrogate mother. When the old man croaks, the animals throw a vegetable bacchanal on the empty property. That is until an estranged control-freak nephew (Domhnall Gleeson) from London inherits the place. The battle between rabbit and man escalates when the younger McGregor begins courting Beatrix.

The animated rabbits are fast and physical, thumping along the grass, and Gleeson's elastic body and face are made for physical comedy. And there are just enough Potter character cameos to make one sentimental for her quietly funny, dark stories with their biting social commentary (I direct you to the animal sacrifice, bad manners and resulting dismemberment in The Tale of Squirrel Nutkin for a refresher). What's an unexpected treat, aside from the movie's cleverness, is that a kids' comedy that could easily have turned into Home Alone with animals makes a turn toward forgiveness and selfless love. PG. 93m. BROADWAY, FORTUNA, MILL CREEK.

BLACK PANTHER. Maybe you heard of it. Chadwick Boseman plays the Marvel superhero/king of the secretive African tech paradise Wakanda, the throne and safety of which are threatened by a rival (Michael B. Jordan). With Lupita Nyong'o and Danai Gurira. PG13. 134m. BROADWAY, FORTUNA, MILL CREEK, MINOR.

SAMSON. Biblical story about a strongman who gets a bad haircut. Starring Taylor James. And hey, it's Billy Zane and Rutger Hauer. PG13. FORTUNA.

THE WIZARD OF OZ (1939). Serious question: Would you even click your heels to come back from Oz at this point? PG. 102m. BROADWAY.

15:17 TO PARIS. Clint Eastwood hikes his trousers up to direct the true tale of American servicemen who foiled a terrorist attack on a train in 2015. Instead of actors, Alek Skarlatos, Anthony Sadler and Spencer Stone star as themselves. With Jenna Fisher and Thomas Lennon. PG13. 94m. BROADWAY, FORTUNA, MILL CREEK.

CALL ME BY YOUR NAME. This meticulously crafted adaptation about a romance between the roguish Oliver (Armie Hammer) and precocious, 17-year-old Elio (Timothée Chalamet) is charged with excitement, secrecy and the shame of new discovery. Novelistic dialogue occasionally distracts but mostly this tale of first love is painfully real. R. 132m. MINOR.

DARKEST HOUR. Gary Oldman plays Winston Churchill as a new prime minister of an England with little appetite for conflict on the cusp of war with Germany. Good news: If you saw Dunkirk, you get a pass on this one. With Kristin Scott Thomas. PG13. 125m. MINOR.

THE GREATEST SHOWMAN. Hugh Jackman sings and dances as P.T. Barnum, an abolitionist and social reformer who made his money off "freak shows" and minstrelsy. Michelle Williams and Zac Efron also star. Statue of Barnum on the Arcata Plaza unlikely. PG. 105m. BROADWAY.

JUMANJI: WELCOME TO THE JUNGLE. A remake of a 1995 Robin Williams vehicle that somehow combines Breakfast Club teen dynamics, body-swap comedies, aggressive hippos and The Rock's skeptical eyebrow? Sure, why not? PG-13. 119m. BROADWAY, MILL CREEK.

MAZE RUNNER: THE DEATH CURE. The last of the video game-inspired action series with a boy band of rebels, now freed from their maze, fighting an oppressive regime of lame adults who are sacrificing teens to find a cure for a deadly disease. Starring Dylan O'Brien and Rosa Salazar. PG13. 142m. BROADWAY.

THE PHANTOM THREAD. Paul Thomas Anderson directs Daniel Day-Lewis and Vicky Krieps in a romance about a couturier who falls in love with his muse. Immersive settings, costumes and a nuanced story reward the viewer's patience. R. 130m. MINOR.

THE SHAPE OF WATER. Guillermo del Toro's exquisitely designed and executed love story/fable/tribute to monster movies of yesteryear showcases career-best performances from its cast, including Sally Hawkins as a mute woman who falls in love with an amphibian played by the lithe Doug Jones, with Michael Shannon as an evil scientist. R. 123m. BROADWAY, MINOR.

WINCHESTER: THE HOUSE THAT GHOSTS BUILT. Guns don't kill; ghosts do. Tour 500 rooms (and counting) of haunted house with Helen Mirren in head-to-toe black lace as the heir to the Winchester rifle empire. With Jason Clarke as the doctor sent to assess her sanity. PG13. 99m. BROADWAY.