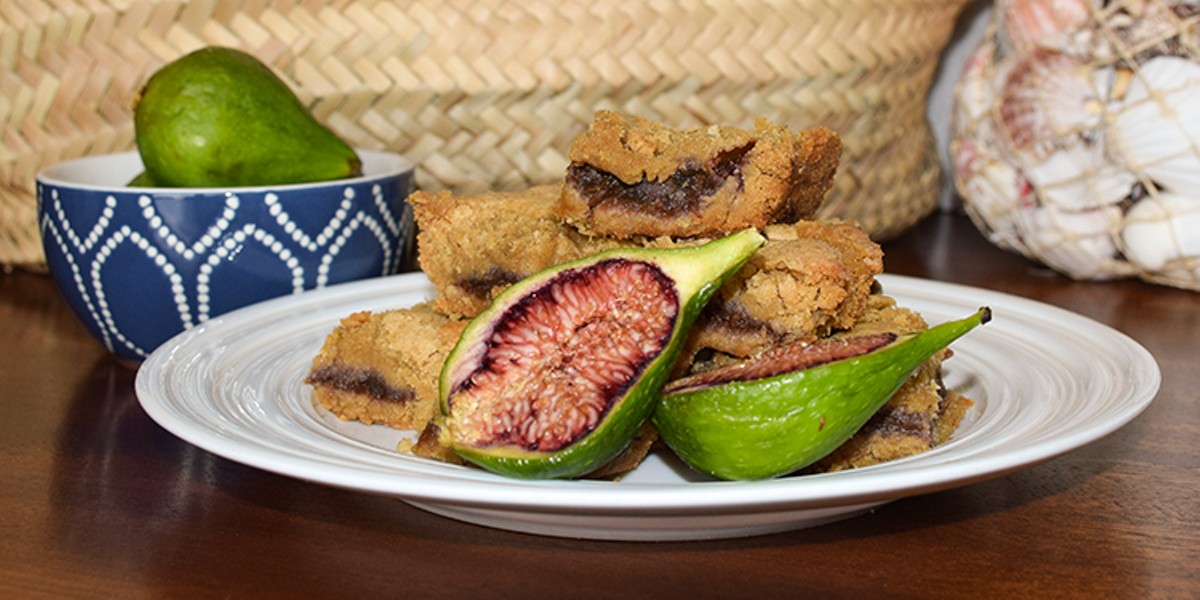 Photo by Jennifer Fumiko Cahill You won't give a flying fig there's no wheat flour in these.

My dad says he doesn't like figs and it makes me want to club him over the head. How can you not love figs? Rich, heady, creamy flavor, absolutely bursting with sweet, summery juices, their smooth shape making them a joy to eat out of hand, figs are the luxurious summer eating experience. I look forward to them all winter. There is a big beautiful fig tree in my neighborhood that positively throws figs at me when I'm walking past, and there is a brief mind-boggling period when I have far more figs than I can eat.

There are, of course, a zillion things to do with figs — grilled and served with ice cream, baked in tarts, in a fruit salad, served with cheese, made into a savory sauce to have with lamb or chicken, made into a quick sauce to have with waffles, dried, canned, simply cooked with sugar syrup and cardamom; the list is very long. Jam. Cake. Stuffed with chevre. Slivered in chicken salad. In my version of heaven, there will be lots of ripe figs and I won't have to wash any of the canning pots. I even buy them at the store once my tree has expended its glory, which I do with some gnashing of teeth because they aren't cheap, but by this point in the summer I'm addicted and I can't really face another day unless I am fortified with figs. Soon I will have to go through fig withdrawal because the season is short but we still have a few weeks of figgy bounty.

On a recent lazy, figgy afternoon, I was whiling away the hours with my sister-in-law Claire and her mom Maria, and we were musing about ways to use the small mountain of figs they had harvested from the tree. It's advisable for tummy reasons to not actually eat as many fresh figs as you'd like, so we were thinking of ways that one may cook them. Maybe it was having a mama in the room, because the Fig Newtons of our remembered lunch boxes sprang to mind for us all.

Remember Newtons? "It's not a cookie, it's fruit and cake"? My mouth is watering just thinking about them. Clare and Maria avoid gluten, so they haven't had Newton's in a donkey's age (I, of course, with my ravenous sweet tooth sometimes snarf a box in January, usually with a glass of milk and a Star Trek episode). But they have discovered Bob's Red Mill Gluten Free, which apparently acts as advertised and works well as a wheat flour substitute. Clare did some Internet research and merged together a few recipes. Her first batch was a winner, not precisely like the Newton but tasting quite literally of fruit and cake, with a lovely rich bar crust and a toothsome, sweet fig filling. She made another batch and, after twiddling a bit with the baking times, I am proud to present these as really, really good fig bars. I love gluten but didn't miss it; I am sure this recipe will work as well with normal flour. Meanwhile, it's good to have some solid gluten-free dessert recipes in one's repertoire, seeing as this gluten free thing (apologies to celiacs-ers) doesn't seem to be going anywhere.

The bars get better with age so they are great made on a Sunday for weeklong snacks, or you could serve them warm with whipped cream or ice cream for a more upscale dessert. I think that the cardamom ice cream sometimes available at the Co-op or more occasionally at Scoop would really be a knockout. As I said, it's not quite like a Newton because the crust is considerably richer, but the overall effect is chewy and figgy and will really scratch that Newton itch. Go ahead and make a batch some afternoon — it's a wonderful seasonal specialty and your gluten-free friends will like you even more.

Smash the figs with a wooden spoon or by hand. In a large saucepan, cook them down for 1 hour, stirring frequently. Add the pinch of salt and squirt of lemon juice. Remove the mixture from heat and let it cool enough to chill in the refrigerator.

Mix the flour mix, baking soda, salt and nutmeg in a large bowl. In a separate bowl, blend the butter, sugar, brown sugar, vanilla extract and beaten egg. Combine the wet and dry ingredients and form the dough into a ball. Cover it in plastic wrap and refrigerate for at least an hour.

When dough is chilled, divide it in half. Using a rolling pin, roll each half roughly into the size and shape of your pan. Place one layer of dough in the bottom of the pan and spread the fig filling evenly. Carefully set the other layer of dough on top of the filling.

Bake at for 40 minutes or until golden brown. Cool and cut into bars. Let cool completely or serve them warm.