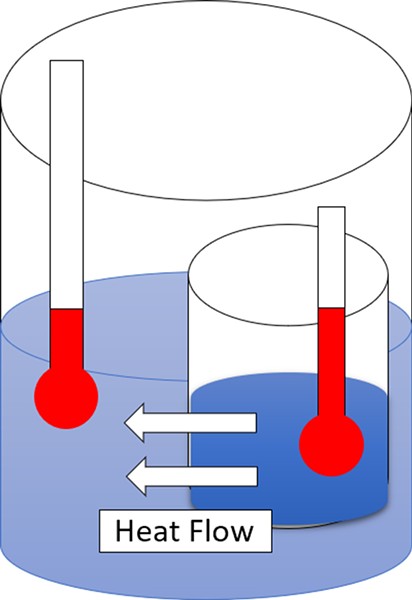 Illustration by Blyum, Creative Commons license The Second Law of Thermodynamics asserts that the entropy of a closed system always increases. Here, heat flows spontaneously from the hotter to the colder body, increasing the overall entropy and thus decreasing the useful work available, even though the energy content of the system stays constant.

Life's tough, then you die," proclaims that helpful bumper sticker. Then look at what happens: Entropy takes over. Actually, the entire course of our bodies' existence, from birth to death, is spent in a nonstop battle to maintain low entropy. The moment we die, entropy starts increasing as the body's organization gives way to decay. No wonder life is tough. "Fight entropy!" (another bumper sticker) might well be the rallying cry of all life on Earth.

Entropy can be loosely thought of as a measure of disorder: Chaos and order correspond to high and low entropy, respectively. You don't have to die to watch entropy do its thing, though. Consider, for example, what happens on a trans-Atlantic flight. At take-off, the wide-bodied jet is a model of orderliness — magazines in their pockets, cups and glasses still in the galley and all us cattle (as we're fondly referred to by the crew) appear reasonably neat and clean. Ten hours later, cups, kids and trash are all over the place, newspapers and magazines litter the floor, and our clothes and minds are all in the later stages of crumpledom. What before was order is now chaos; where everything had its place, all is now randomly distributed. That's entropy.

I'm not sure if the founder of the concept of entropy, Rudolf Clausius (1822-88) would have appreciated my example (assuming he could picture a 400-ton vehicle winging through the skies). He conceived of entropy as an adjunct to the Second Law of Thermodynamics, for which he was largely responsible. With entropy loosely defined as "a measure of disorder," you can think of the Second Law as saying that the entropy of a closed system always increases. Technical methods for measuring "disorder" are well established but let's assume for now that you can buy an "entropy meter" at Sears. At the start of a long flight, the needle gives a relatively low reading in the cabin. During the flight it slowly creeps up, and by the time we touch down, the needle is high on the scale. We say that the entropy of the system — the plane's cabin — has increased.

Wait a minute, though. When we're ready for our return flight, we walk on board and check the entropy, and the reading is once again well down — order has somehow been restored. Where did it come from? From outside the system. In this case, from outside the plane: The cleaning crew had reinstated the lost order. Somehow they were able to convert their personal low entropy into low entropy for the plane. Their low entropy came from low entropy food they'd eaten and from oxygen in the air they'd breathed. (And if they were using vacuum cleaners, the low entropy electrical energy needed to power them came from the local power station.)

A system, then, can only become more ordered at the expense of things outside the system becoming more disordered, which is why we talk about a "closed" system. Also note that it's easier to end up with disorder than with order (look at your desk at 5 p.m.). Imagine filling your bathtub and dividing the water into two halves with a dam down the center. Add blue dye to one side, red dye to the other, and carefully lift the dam, trying not to disturb the water. In minutes your bathtub will be filled with uniformly purple water. Easy, right? Now keep watching, waiting for the water to be separated again into blue and red. It's not impossible, since the individual molecules of dye don't obey any arrow of time, but you'll be waiting a long time. How long? Beyond the age of the universe, statistically speaking.

These examples show us that systems naturally move from order to disorder. The unmixed fluids are more ordered than when they're mixed, from a physicist's point of view. That is, unmixed corresponds to lower entropy than mixed. Next time, let's see how it works with our bodies.

Barry Evans' (barryevans9@yahoo.com) desk is pretty much in a permanent state of high entropy.