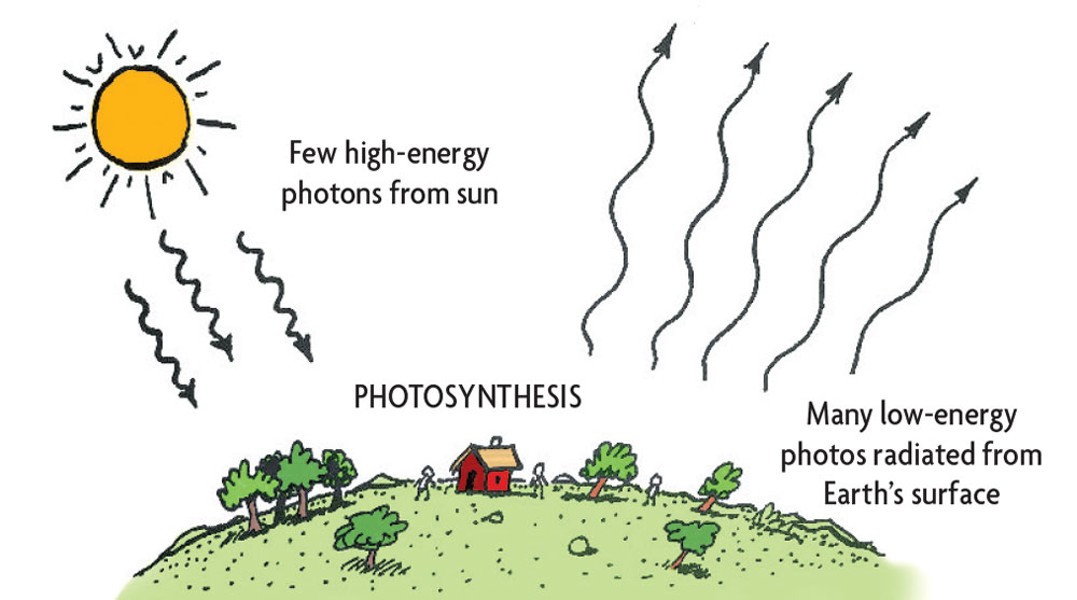 Everyday Wonders by Barry Evans The sun, our source of low entropy, emits useful energy as visible light photons that power photosynthesis on Earth. Our planet radiates (nearly) as much energy as it receives in the form of "low quality" infrared photons, that is, heat.

In Part 1, I discussed how entropy can be thought of as a measure of disorder, where chaos and order correspond to high and low entropy, respectively. Let's see how this works with our bodies, that is, how we stay alive. Compared to the air that surrounds us, our bodies and brains are highly organized, making us localized clumps of low entropy in a high-entropy environment, as the (hypothetical) Sears entropy meter we bought last week would confirm. Put another way, the molecules of our bodies are arranged in a highly selective way, such that our component parts and our entire bodies are individualized. Not so with air and water, for instance: There's nothing to distinguish one volume of air or water from another, so their entropy is higher than ours.

According to the well-tested Second Law of Thermodynamics, overall entropy is constantly increasing, apparently contradicting the fact of our existence. If entropy is on the increase and everything is tending toward a state of random disorder, how can our highly ordered bodies be here? That is, where does our low entropy come from?

Directly, it comes from our food: Our bodies import low-entropy energy as food and export it as high-entropy heat, excreta, water vapor and carbon dioxide. (In the same way, last week's airplane cleaning crew's low-entropy energy was transferred during the course of their work to the plane and its contents.) So while the energy we lose equals the energy we gain (unless we're putting on or losing weight), the entropy of our output energy is higher than that of our input energy. The difference keeps our bodies alive and ordered. When we die, the process stops and (left to themselves) our corpses naturally revert to a high, disordered state of entropy. In a word, they rot.

So if our source of low entropy is the food we eat, where does that come from? Indirectly, from the sun, via photosynthesis which converts low-entropy sunlight — photons of visible light — into plants we eat (or that animals eat, which we then eat).

Let's look at this process from the overall energy/entropy balance of our planet. Like each of us, Earth is in an approximate state of energy equilibrium: Our planet receives as much energy as it loses. (Global warming results from the current imbalance: Input exceeds output.) Although the in/out energy almost balances, the in/out entropy doesn't. The heat that Earth radiates into space has a much higher (about 20 times higher) entropy than the incoming visible light energy we receive from the sun. The low-entropy light coming in is useful energy while the high-entropy heat leaving is essentially useless. The sun, then, is the source of Earth's useful low-entropy energy. In an essentially black, featureless and high-entropy sky, the sun stands out as a glob of low entropy. And that's the trick that keeps us alive.

But where does the sun's low entropy come from? It originated in the gravitational collapse of the diffuse cloud of gas from which it formed 5 billion years ago. And that low-entropy stuff originated in the Big Bang, the unfathomable (but highly ordered!) event that birthed our universe. Your body's organization came from the Big Bang.

In the 14 billion years since, the entropy of the universe has steadily increased. And no matter what the ultimate fate of the universe, Big Crunch or slow heat death, it will continue to increase, despite temporary localized arrangements of low entropy. Including insatiably curious human beings who persist in fighting the overall trend for all its worth.

Barry Evans (barryevans9@yahoo.com) wonders if raging against the dying of the light does any good.