The City of Eureka and its residents take on an infamous slumlord, and the slumlord fights back 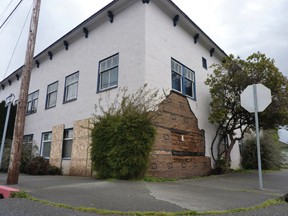 For a neighborhood watch meeting there were an awful lot of official types in attendance. On Wednesday, March 31, a small group of Eureka neighbors were joined -- in City Council chambers, appropriately -- by City Councilmen Jeff Leonard and Larry Glass, Assistant City Manager Mike Knight and EPD Lt. Murl Harpham, among others. The issue at hand -- 833 H St., a dilapidated apartment building owned by notorious local slumlords Floyd and Betty Squires, who were also in attendance.

Neighbors of the crumbling eyesore say their wranglings with the Squires -- Floyd, in particular -- date back at least seven years. Their requests for a neighborhood watch meeting started in April 2003, prompted, says neighbor Mary Boughton, by the squalid, trashy condition of the place -- garbage strewn about, abandoned vehicles, broken windows with glass shards pointing toward the sidewalk -- not to mention countless police and fire calls. The neighbors eventually got their meeting, in August of 2003, and they've held others since. But the problems have continued. "It's been an ongoing thing," Boughton complained.

Indeed it has. At least 15 code enforcement violations have been filed on the property since 2000, when the Squires purchased the building. And the H Street building is hardly an anomaly. As the Journal was going to press, Eureka City Council was set to adopt at its Tuesday night meeting a resolution imposing liens and fines on nine Eureka properties, six of which (including 833 H St.) belong to the Squires. Among the City building and safety codes infractions on those six properties: water leaks, deteriorating floors, rotten wall coverings, inadequate heating facilities, cockroach infestation, broken glass, general dilapidation and "maintaining a junk yard condition." (For a sense of scope on Squires' landlord history, see "A Tenant's Nightmare," April 25, 2002.) All told, the Squires owe $78,523 in unpaid fines to the City, which may explain the interest of those City officials who attended the recent community meeting.

Leonard said the gathering felt a bit like déjà vu. "It's the same exact meeting that we had in 2004," he said, "same building, same problems, same neighbors, same complaints." According to Knight, the City provides ample opportunities for landlords to avoid liens for unpaid fines, which he described as the final, reluctant step in a lengthy process of warnings and citations. In a recent letter to Floyd Squires, obtained by the Journal, Eureka Plans Examiner Brian Gerving reminded him that he'd been notified of violations repeatedly by certified mail, and that while various permits had been obtained over the years to correct those violations, they have expired, one by one, with no repairs having been made. On Jan. 24, 2007, the City began assessing an administrative citation of $350 per day on 833 H St. Unpaid fines for that property alone have now reached $34,918 and counting.

When the Journal contacted Floyd Squires Tuesday afternoon, he adopted a remarkable line of defense -- outright denial. "I've never had any fines on anything," he claimed. Then, reconsidering, he said there was one, "many, many years ago [for] something like $1,700." Regarding 833 H St., Squires said he's done an immense amount of work there, installing new windows, doors and heaters, all of which was signed off on by City inspectors. When told of the liens set to be assessed Tuesday night he said, "This is news to me." When asked about his reputation for spending more money fighting the City in court than it would cost to simply repair his properties Squires said, "I don't fight citations in court. Never have."

In fact, he was in court just last week, arguing with the City over another of his properties -- 315 C St., a former warehouse illegally converted into apartments and deemed by inspectors to be inappropriate for human habitation. There's also an active lawsuit in the court of appeals regarding failure to correct cockroach infestation at 117 and 119 5th St. "There are so many cases, so many violations, I could easily keep a small law firm busy doing absolutely nothing but trying to get all of Floyd Squires' buildings into safe and sanitary conditions," City Attorney Sheryl Schaffner said last week. "And I don't have that luxury. I just tackle the ones that seem to be screaming for attention. And he's threatening to sue me and others for harassment for doing that."

That's the latest twist. Late last week, Floyd Squires' lawyer, Brad Floyd, delivered a draft lawsuit to City Hall, threatening to sue Glass, Gerving, Knight and Deputy City Engineer Gary Boughton. Gary Boughton is the husband of Mary Boughton, the H Street neighbor leading the uprising there. (The neighbors have threatened a lawsuit of their own, against the Squires for nuisance abatement, and they have reportedly obtained the pro bono services of local attorney Peter Martin.) Squires alleges that Gary Boughton used his position in the Engineering Department to gather attendees for the March 31 neighborhood watch meeting, and that city officials have been badgering him without cause.

Given this threat of legal action, not only are Squires' claims of ignorance on these matters incongruous and frankly baffling, they're also demonstrably false. He was in court last week, Schaffner confirmed, so he can hardly deny fighting citations there, or, for that matter, the very existence of such citations. As for his assertion that Tuesday night's lien assessments were news, that too can be disproved; they were discussed at the neighborhood watch meeting. "I observed him being informed of it," Schaffner said.

Squires didn't want to address these matters at length over the phone. When asked about his threat to sue he would only say that the City hasn't played straight with him. "There's no lawsuit at this point," he said, "but there's been things that are somewhat made up here."

Ain't that the truth.

Editor's Note: This story was updated from a previous version that misidentified Brad Floyd.