From Cruise to tattoos, Tintin to aliens, here's your holiday movie grab bag 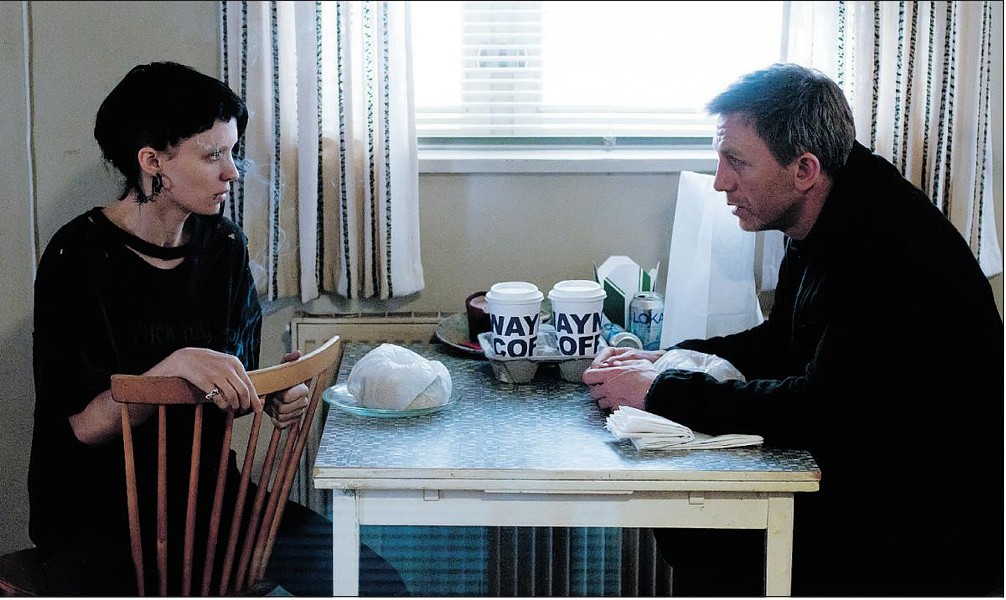 THE GIRL WITH THE DRAGON TATTOO. Journalist Mikael Blomqvist (Daniel Craig) is enlisted to investigate the long-ago disappearance of Henrik Vanger's (Christopher Plummer) niece. Suspects abound -- there are Nazis, drunks and abusers in every branch of the family tree.

The heroine, Lisbeth Salander (Rooney Mara), a punk hacker/researcher, is also among villains, and neither her suffering nor her revenge is for the faint of heart. The film follows Blomqvist and his soon-to-be assistant Lisbeth separately, then joins and separates them again seamlessly, building real suspense. Little by little, Lisbeth and Blomqvist uncover the ugliness beneath the smooth, shiny surface that one aging Nazi likens to an Ikea table.

Rabid fans of the novel may bristle at any adaptation, particularly an American remake, but director David Fincher's pacing and cast are unassailable. Mara's Lisbeth is fascinating. Her face is a smooth white mask over boiling black rage, and she responds to threats either with quick and sure violence or by looking away and disappearing into herself.

Craig makes for an admittedly more butch Blomqvist than in the earlier Swedish film, but also a more vulnerable one. It may be a shock to see our new James Bond whining over a few DIY stiches, but his chemistry with Mara is truly believable. And he does a fine job as a man obsessed. The always excellent Plummer has the gallows smile of one who lives among his enemies, and Stellan Skaarsgard is marvelous as an inscrutable charmer. R. 158m. At the Broadway, Mill Creek, Minor and Fortuna.

MISSION: IMPOSSIBLE -- GHOST PROTOCOL plays like a crowd-pleasing greatest hits of the franchise, zipping between Dubai and Mumbai with disguises, gadgetry and black-tie undercover work. This time, Ethan Hunt (Tom Cruise) ushers agents Benji (Simon Pegg) and Jane (Paula Patton) from one wild scheme to another, breaking into the Kremlin and chasing after nuclear launch codes, picking up analyst Brandt (Jeremy Renner) along the way.

Everyone is disavowed -- these are hard times for spies, too, evidently -- and their flawless executions and seamless cons don't last long into the film. Equipment failure plagues the crew, which must cope with choppy communications and faulty gadgets. It's a clever way to revive the tension after three slick movies.

Our heroes are malfunctioning, too, hesitating to take leaps, then landing hard, sometimes face first. Cruise is wise to trade youthful cockiness for a hint of self-doubt, even if he still clenches his jaw to express it. Back stories are weak, but Pegg's nervous chatter is good fun.

Unfailing confidence belongs to the bad guys, a female assassin with the blank-faced menace of a runway model, and Hendricks (Michael Nyqvist), a pro-doomsday nuclear theorist. He's bland as villains go, driven by flavorless rationality. Director Brad Bird keeps the fun going with inventive chases and near misses. The fight choreography is top-notch, and Renner gives Cruise a run for his money in fast hand-to-hand combat. PG13. 133m. At the Broadway, Mill Creek and Fortuna.

THE ADVENTURES OF TINTIN. Hidden deep beneath my sardonic layers of callous Hollywood bashing, wrapped safely inside the comfort of my childhood, is a love for Steven Spielberg. Despite his rare disappointments (see: Indiana Jones and the Kingdom of the Crystal Skull), he has an unparalleled ability to inspire childlike fascination. My deep-seated love for the original Tintin comics (see: the tattoo on my left elbow), combined with the guaranteed joyride of a Spielberg adventure film, meant I was giddy beyond all belief. (And the theater gave me a poster!)

Blatantly biased opinion aside, The Adventure of TinTin is incredible. Herge's original story and characters gave Spielberg a lot to play with, and he didn't pass up a single opportunity to dazzle the audience with epic chase scenes and masterfully orchestrated fight sequences. Much of the action easily could be inserted into an Indiana Jones film without missing a beat.

For a family film, there was a lot of gunfire and violence, but none of the children in the audience seemed to notice. Instead, the classic slapstick antics of the vintage comics induced constant giggles from the children -- and provided a nice respite from the action for the parents.

It was hard to see Peter Jackson's contribution to the film (he produced it) as it plays as a constant homage to Spielberg. But the stunning visuals can be accredited to Jackson's ingenuity: The combination of motion capture and CGI brought Herge's original drawings to life perfectly. Whether seen in 2D or 3D, The Adventure of TinTin is dazzling and delightful. PG. 107m. In 3D and 2D at the Broadway and Mill Creek, 3D only at the Fortuna.

THE DARKEST HOUR. For those who avoid the onslaught of wholesome holiday films, there is comfort in the jaded darkness of horror. Trailers for The Darkest Hour presented it as a suspenseful thriller with post-apocalyptic undertones. But in reality it's about the average Westerner's lack of knowledge of basic science and electricity.

More of a waiting game than a thriller, the movie is centered around five young, vaguely attractive tourists (Emile Hirsch and Olivia Thirlby being the most recognizable faces) and an alien race of electrically fueled villains.

The five hopelessly naive protagonists make their way through the streets of Moscow, dropping one by one in each ensuing battle. They quickly figure out that the aliens rely on electricity, yet they're mystified about how to combat them. Fortunately, their hapless migration from point to point introduces them to one resourceful Russian after another who, armed with at least a seventh-grade knowledge of electricity, bail out the pitiful Americans at every turn.

Their inability to figure out simple things for themselves is the movie's only source of suspense. The shameless nerd inside of me yearned to shout, "Ground the current!" but it hardly seemed worth the effort. The plot was too thin and the acting too melodramatic to generate attachments to any of the characters. When you don't care whether or not they survive, why bother yelling helpful hints? PG13. 89m. In 3D and 2D at the Broadway and Mill Creek.

The Mayan calendar app on my smartphone says the world is gonna end next year. Good thing Roland Emmerich showed us all what to expect in his 2009 disaster film 2012, showing Friday at the Arcata Theatre Lounge. Your two-step survival guide: 1. Find the plane being piloted by John Cusack. 2. Get on it. PG13. 158m. 8 p.m. And since Armageddon doesn't arrive until next December, we can enjoy another year's worth of Sci-Fi Pint and Pizza Nights, starting Wednesday, Jan. 4, with an extra-campy double feature: The Mole People (1956) and Mole Men Against the Son of Hercules (1961). 6 p.m.

ALVIN AND THE CHIPMUNKS: CHIP-WRECKED. People actually go to movies like this, which is why the rest of us can't have nice things. G. 87m. At the Broadway, Mill Creek and Fortuna.

HUGO. Martin Scorsese's adaptation of Brian Selznick's novel The Invention of Hugo Cabret follows the adventures of an orphan boy living a secret life inside the walls of a 1930s Paris train station. PG. 127m. In 2D at the Broadway and Garberville.

SHERLOCK HOLMES: A GAME OF SHADOWS. When the powers of deduction fail, my dear Watson, let us punch these fellows straight in their gobs, shall we? Pip pip! Cheerio! PG13. 129m. At the Broadway, Mill Creek, Minor and Fortuna.

THE SITTER. Jonah Hill stars as a craven college student coerced into babysitting the bratty kids next door. R. 81m. At the Broadway.

WAR HORSE. Part World War I epic, part family-friendly weepy, this tale of friendship between a boy and his horse is Steven Spielberg working in his sentimental wheelhouse. PG13. 146m. At the Broadway and Mill Creek.

WE BOUGHT A ZOO. Following his wife's death, a dad (Matt Damon) tries to cheer up the kids by ... well, let's not give away the plot. PG. 124m. At the Broadway, Mill Creek and Fortuna.