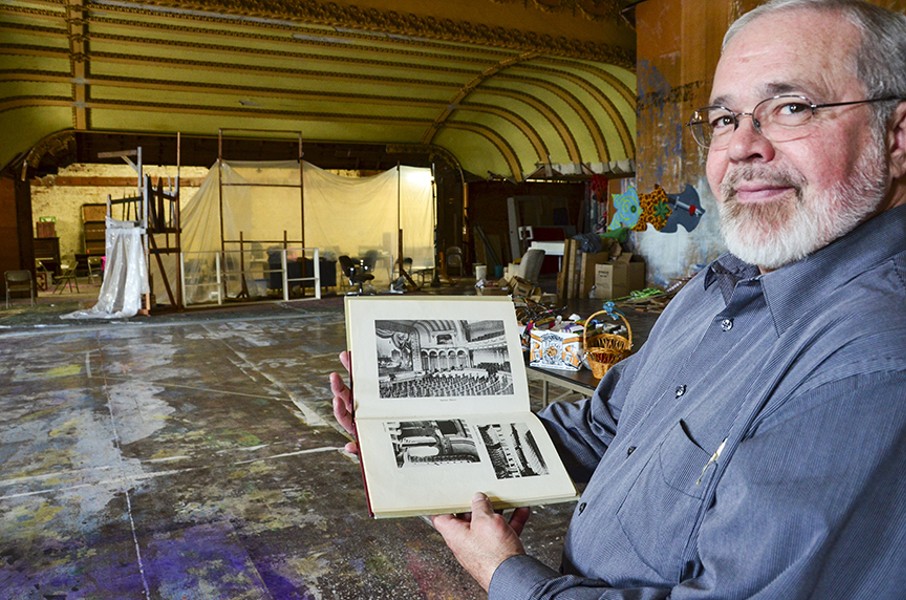 The stucco is cracked and stained, with mustard yellow streaks dribbling over tan walls. One of three corner turrets is missing, pulled down years ago to make space for a neon sign. The roof leaks.

For decades, Terry Coltra has hoped and dreamed about restoring the Carson Block building in Old Town Eureka, as visions have come and funding sources have gone.

Now, although people involved murmur anxiously that they don't want to jinx anything, a deal is close to done for $8 million in seismic retrofits and a new-old façade, one that captures the look of the early 1900s.

"I've been working on this for 27 years, so it's about time," said Coltra, executive director of the Northern California Indian Development Council.

The council bought the Carson Block building in 1986, after Coltra approached the then-owner about expanding a gift shop his group operated on the first floor. Instead, he was offered the whole place.

The council paid $800,000 for a three-story hulk at the corner of Third and F streets, complete with musty halls, lavishly carved oak bannisters and the husk of the Ingomar Theater, one of the few second-story performance spaces of its era. Coltra figured he'd restore it, theater, exterior and all. "It has such great history," he said.

Since then, as cracks in the walls have deepened and stucco has flaked away, the building has housed the offices of psychologists, therapists, mediators and the Indian development council.

On its ground floor, for more than 15 years, kids have splashed and poked and thumped on interactive exhibits at the Redwood Discovery Museum. Actors from the Ferndale Repertory Theatre have rehearsed on the third floor, saving themselves multiple trips to Ferndale. And an Ink People mural project has painted and dabbled under the gilt medallion where the theater chandelier once hung. Most of the occupants pay rent, but Coltra gives space gratis to the artists.

He's still not sure who will have to move, and for how long, once restoration work begins. To help make those decisions, Coltra said, the Indian development council will bring in a relocation consultant, who will look at various ways the work could be staged to disrupt tenants as little as possible. That was a condition for one of the many grants and loans in the $8 million package.

"In regard to the Discovery Museum, we may be able to get into that space, do what we need to, and get them back in within a week," he said.

That's likely to be a relief to museum Executive Director Lynn Langdon, who hadn't heard, until the Journal called, that the slow slog toward renovation is gaining speed.

"I've been here three years, and when I first got here, they were talking about renovating the building," she said. "Our board is like, 'When they give us the boot, we'll figure it out.'"

She said the Indian development group has been a wonderful landlord, understanding when the museum hit its own financial bumps over the past year. Still, she added, "our ideal situation would be, we'd love a free, new place. But that's like a pipe dream."

The timing of any disruptions for the building's dozen or so tenants should become clearer in the next few months as Coltra puts the final pieces of funding in place. Right now, the development council has $1.5 million in hand from the California Cultural and Historical Endowment to pay for bringing the building's façade back to its 1917 look. (It would be too costly to try to recreate the elaborate 1892 façade, and more of the 1917 materials are still around, buried under newer layers.)

Another $1.5 million loan is coming from a coalition of four local agencies, the Humboldt Area Foundation, the Headwaters Fund, the Redwood Region Economic Development Commission and the Arcata Economic Development Corporation (AEDC), which is servicing the loan. Each is kicking in $375,000, and the federal Bureau of Indian Affairs is guaranteeing 90 percent of the loan, reducing the risk for the local organizations.

The money will be enough to make the place earthquake safe and to leave a strong framework inside where one day — when more money can be found — the theater, too, could be restored.

Assembling the complicated loan package is "kind of a big deal," said Ross Welch, executive director of AEDC. "It's the second time we've done it, and I'd like to do more of these."

All that local money, though, is contingent on bringing down the fiscal big game, a $5 million behemoth that seems likely — and here's where everyone squirms a little and talks about crossed fingers — to come through by late July. The money is expected to come from a state Community Development Block Grant aimed at reducing blight in small, relatively low-income communities. Coltra and Welch are both hopeful, partly because the grant effort is fairly far along.

So after years of hoping, how close is this to really happening?

No matter what, Coltra said, work on the leaky roof has got to get going, and it will start in August. That could be done without ousting any tenants.

Then, in early 2014, the seismic retrofit and façade work could start. When it's all over, about nine to 11 months later, the building will be earthen red, with copper bands around the base of each turret and a greenish metal roof that will evoke the oxidized copper of the original roof. The stucco will be gone, replaced with wood and terra cotta bricks.

And the third turret will be back, its windows facing south, west and east, just as they did in 1892.