The popular myth about Humboldt Bay, one that I've been guilty of promoting, says that Josiah Gregg "discovered" the bay in 1849 after a tortuous overland trek from near present-day Helena, resulting in the first ship, the Laura Virginia, entering it on April 14, 1850. (I discussed Gregg's expedition in Josiah Gregg in California, April 28.) How then do you explain this Russian map dated 1807 titled (Rezanov) that looks remarkably similar to a modern chart of Humboldt Bay? 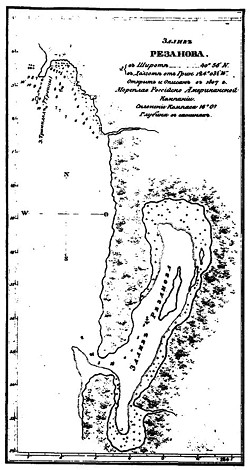 (Of course, the bay was already well known to the region's Indigenous population. The Wiyot people had been living for over a thousand years in villages around Wigi, in the tribe's approved spelling system, what we call Humboldt Bay after the Prussian explorer and polymath.)

It's true the entrance to Humboldt Bay, the only deepwater bay between the San Francisco Bay and Coos Bay, had been missed by many early European Pacific Coast navigators: Juan Rodriguez Cabrillo, Francis Drake, Sebastián Vizcaíno, George Vancouver, Alessandro Malaspina and Spanish captains Bruno de Heceta and Juan Francisco de la Bodega y Quadra. The last two made landfall nearby, at the Yurok village of Tsurai, present day Trinidad, where they erected a cross on Trinity Sunday, June 11, 1775, hence the name of the town. But "our" bay had to wait another few decades, until the arrival of a 93-foot Boston-based square-rigger sailing out of New Archangel, present-day Sitka.

The captain and part-owner of the O'Cain was 26-year-old Jonathan Winship, who had entered into a canny arrangement with the Russian governor of Alaska in 1803. The Russians had already slaughtered thousands of Alaskan sea otters, valued for their thick, silky fur, and were looking for new hunting grounds. In a move that would be the envy of any internationalist today, the Russian governor and the American entrepreneur agreed to a joint venture under the newly created Russian-American Co., Aleksandr Baranov would supply the hunters and Jonathan Winship would supply the boat, with profits to be split between them.

The first voyage under this arrangement was so successful (unless you were a sea otter) that a second one sailed from New Archangel in late May of 1806, heading south to California, which was then under loose Spanish rule. In addition to the crew of Americans and Russians, the O'Cain carried 100 Kodiak and Aleut sea otter hunters along with their skin covered kayaks, or baidarkas (Russian for "boats"). That June, the ship anchored offshore while a party rowed to what we now call North Spit and walked across to where they "discover'd a very spacious Sound." In the space of a week, the Native Alaskan hunters in their baidarkas had dispatched hundreds of sea otters while the Russians mapped the bay, naming it after Nikolai Rezanov, advisor to the tsar and founder of the Russian-American Co. The O'Cain itself didn't attempt to enter the bay and departed after local Wiyots threatened to attack the intruders.

Another 44 years would pass before ships actually sailed into Humboldt Bay. If the American crew also mapped the bay, their chart was lost, while the Russian one may have been kept secret. The bay wasn't known, for instance, to Captain Charles Wilkes of the U.S. Navy in 1841. After surveying the coastline, he concluded, "No ports exist along any part of it, that are accessible to any class of vessels, even those of but very small draught ... it is an iron-bound shore rising perpendicular from the water."

As for the unfortunate sea otters, hunting that began in earnest in the 1740s reduced a population once numbered at about a quarter of a million to less than two thousand and, by the early 1900s, they faced extinction. Thanks to a 1911 international treaty for their protection, their numbers have since rebounded. Today, over 100,000 sea otters live in an arc along the Northern Pacific stretching from Siberia to Baja California.

Barry Evans (he/him, barryevans9@yahoo.com) is indebted to Ray Raphael and Freeman House and their book Two Peoples, One Place.