Up in the Trinities, an unholy fire season makes, breaks communities 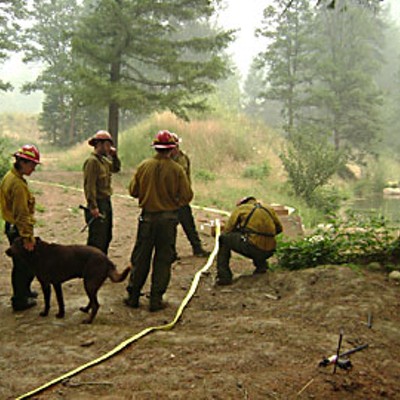 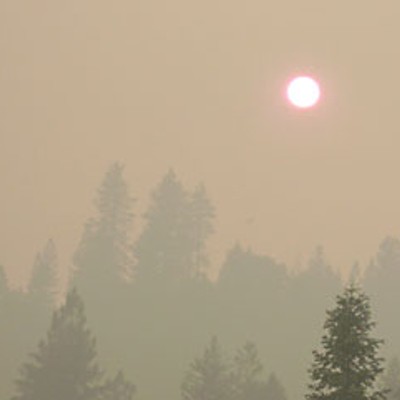 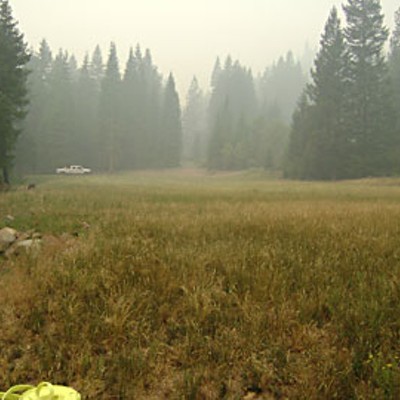 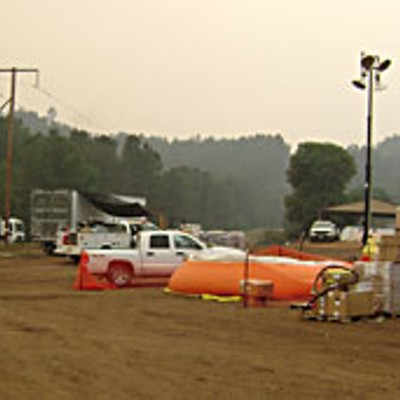 Five firefighters from different parts of the country climbed out of a gray truck on Sunday morning. Dense smoke pressed against their red helmets, hot and heavy like a clothes iron. They all wore yellow shirts tucked into green fire-resistant cargo pants as they pulled supplies from the back of the truck.

They didn’t get close to the flames that day. They had a different task. They came to protect property and structures in Corral Bottom, a swath of private land that runs between two ridges in the Shasta/Trinity National Forest.

If the fire came at all, it wouldn’t show up for a few days, but they came prepared. In the back of the truck, they had several rolls of firehoses, still in the box. They had gas cans. They had a pump. They had sprinklers, tools, nozzles. They had everything they needed, even lunch.

The order came that morning that the area is a new priority. A Trinity County Sheriff’s deputy arrived before the firefighters and told residents that the area is under a mandatory evacuation. At least two people stayed. Traffic on Corral Bottom Road increased throughout the day. More firefighters showed up. Semi-trucks carried bulldozers to different points and unloaded them. The new front to combat the Iron Complex fire had shifted. And it happened seamlessly.

Angela Smith is a public information officer for the Iron Complex fire. She arrived at the Incident Command post in Junction City from her home in Missouri on Wednesday, July 9. She sat in a beige tent with piles of maps and fire updates spread out on the tables around her. The loud hum from the fan on the air conditioner filled the tent. The circulating air ruffled the papers. She said that it takes a lot to fight a fire.

“When resources from a local area are taxed, they put out the call and people from all over the country come to help,” she said.

By Saturday, the Iron Complex fire, one of the 55 large uncontrolled fires that burned Northern California over the last few weeks, had chewed through more than 32,000 acres of land at a cost of $14.4 million dollars. Firefighting is a big operation and it takes a big organization to carry it out.

The National Interagency Coordination Center, based in Boise, Idaho, is always on call. After a lightning storm blew over Northern California on June 24 and sparked hundreds of fires, the NICC set up incident command posts at several locations in the state.

“You take this type of organization from all over the country and flop them down in an incident, and they know how to work within the system,” Smith said.

The incident command post in Junction City is a compound of rented trailers. Erected in an empty lot in a couple days, this compound is now the center of operations for the Iron Complex fire. The personnel there include an onsite meteorologist, a team of public information officers, payroll clerks and the incident commander. Together, they manage a workforce of over 1,000 people who need to be fed, housed and paid. They make sure that all the firefighters’ needs are met.

Smith climbed into her car to drive to Base Camp to get lunch. Like most of the vehicles at the command post, it’s a rental car. She explained that there isn’t enough room in Junction City to have the command post and the base camp at the same location, so they had to split up the operations.

“Most people sleep in their tent at base camp,” she said. “I sleep in my rig.”

Base camp ran along Highway 299 for a quarter mile or so just outside Junction City. It looked like its own community. Set up in large, beige tents, different stations distributed supplies to the firefighters. One tent had supplies like radios, batteries, shovels, hoses and pumps. Another had drinks. Another had food.

Big rectangular tents half the size of a basketball court surrounded a catering truck. Inside, long tables had condiments neatly arranged in the middle. Connected to these tents, workers set up a full salad bar and drink station. The night before they dished out over 10,000 meals. Saturday night, they planned to serve chicken and tofu pasta primavera as the main dishes.

All the firefighters’ needs are met at base camp. There’s a mechanic in case one of the vehicles breaks down. There’s a medical tent in case someone gets hurt. There are sack lunches, showers and laundry.

Kathy Jalquin of Redding washes the firefighters’ clothes. She sat at a table under another beige tent. It ran the length of a trailer. Inside the trailer, the whir of washing machines and clothes dryers could be heard. Stacks of clothes in plastic bags were piled against the walls, all of them tagged, waiting for whoever dropped them off to come pick them up. This is Jalquin’s second season washing clothes for firefighters. Sometimes she washes up to 300 loads of laundry a day. She doesn’t mind the job at all.

“What I like to think in my head is this,” she said, “this could be the man or women who could save my house. If I can give them clean socks and underwear, I’m doing my job.”

Firefighting is a complicated effort and everyone has a job to do. Smith said that most people work 14-hour shifts. She said there isn’t much time to do anything but eat, sleep and work. The National Interagency Coordination Center makes all this possible. They do their job so well that it frustrates some local business owners.

Mike Colluci owns the Trinity Adventure Park, about 15 miles from the Base Camp in Junction City. Firefighters drive past his store and campground every day. Few of them stop. Since the fires started, he’s lost a lot of business, he said.

“All these firefighters are looking at the campground and the shade. They want to use it, but can’t. They have to stay in the field in Junction City,” he said. The incident management plan for the Iron Complex Fire also states that the Trinity River is off limits to fire personnel, even if they are off duty.

Colluci’s business relies heavily on the tourist industry. There are a few rafting companies in Big Flat where the Trinity Adventure Park is. Not many people are rafting the river these days, though.

On a typical weekend during the summer, all 20 spots at his campground are full. He gets reservations for the Fourth of July a year in advance. This year, all of them canceled. And the firefighters aren’t making up for it. “Not even close,” he said, “There’s way more business if there are tourists.”

“I’m hoping the smoke will lift.”

That’s seems unlikely, though. Back at the incident command post Mary Rasmussen, another public information officer, said that it’s likely their heels will be dug into the area for a while. Last year, the National Interagency Coordination Center had incident command posts in Idaho to fight fires. The fires burned from July until the snows came.

She’s noticed a trend that fire seasons are longer now. She blames global warming. “There is data to support the concept that we are losing our snowpack sooner,” she said. She said that the snowpack helps reduce the duration of the fire season because it melts slowly and keeps vegetation and soil moist. She said when the snowpack melts earlier in the year, everything dries out sooner and it extends the fire season.

As far as this fire season goes: “There is no end in sight,” Rasmussen said.