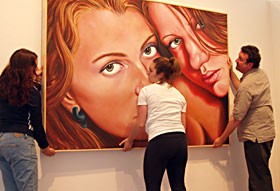 If you’re like me and you enjoy watching artists develop from the earliest stages of their careers, you’ll be interested in the exhibition at the First Street Gallery this month. The Young Alumni 2007 show features works by 17 recent graduates: paintings, photographs, prints and clay sculptures by artists with lots of energy and talent.Gallery staff was still working on installing the show when I was there this week. I went to talk to gallery director Jack Bentley about rumors that have been flying around recently regarding the gallery’s future.

Humboldt State University did something unique nine years ago when it opened an art gallery in Eureka, eight miles south of the school’s main campus. HSU has several other galleries on campus, but the First Street Gallery’s location, in Old Town, provides a different dynamic. Far removed from the comfort of the campus’ ivory towers and cast adrift on the ocean of the public sphere, the gallery serves different functions. It gets academic art shows out to people who would not get onto the campus to see them, and it forces the gallery and its staff to think like vital participants of the community as a whole, and in the process to bridge something Bentley describes as a “perceptual town/gown divide.”

A number of community members who frequent the gallery and make it a destination point on Arts Alive! Saturdays have come to depend on it as a link to the greater world of contemporary art. As a part of an academic institution it has a unique capacity to “provide a publicly accessible venue for art made by regional, national and international artists as well as the faculty, staff, students and alumni of Humboldt State University,” as declared in the gallery mission statement.

There seems to be consensus that that mission is being fulfilled, which makes the rumor that the budget crisis at HSU could result in the loss of funding for the gallery all the more concerning. So where did this rumor that the gallery might be going away come from?

“There were two events,” said Bentley. One was a statement in a report presented by Dr. Manuel Esteban, a former HSU provost brought in as a consultant to examine and make suggestions regarding the school’s budget woes. He noted that “HSU spends more than most campuses in the CSU on museums and galleries.”

“That raised a red flag,” said Bentley, who argues that the statement is misleading because many CSU colleges only have galleries that are funded within their academic budget.

Then there was a report from the University Budget Committee, a group of faculty, staff and students who compiled a report ranking the importance of various university departments and programs. The committee was unanimous in placing First Street Gallery and the campus radio station KHSU dead last in importance to the school’s central mission.

The committee’s recommendation was that the gallery, along with KHSU and the off-campus Natural History Museum, be defunded over a period of three years. The recommendations of the UBC were not binding, but be that as it may, the press duly reported them, and the rumor that the three institutions were doomed took on a life of its own.

And of course there was support from another important contingent: the students. HSU students benefit from the gallery in a number of ways. Many of the Studio Art majors find their first experience with a professional gallery there. For those in the Museum Practices program, there is no better learning lab. Students can intern or get a paid job at the gallery (you must be an HSU student to work there).

“Learning about the space in which your artwork will be presented and sold is a really valuable experience,” said Camille Zazou, an artist who works at First Street as a student assistant. “You know what’s expected of your work and of you if you’re going to be showing in galleries.”

Zazou was one of 384 students who signed a petition included in Bentley’s report. It’s hard to say if it was the community and student uproar that did it, but the university seems to have decided against acting on the UBC recommendation, at least for now.

According to Serena Zelezny from HSU’s public affairs department, “The First Street Gallery will remain as is. It’s receiving a small budget cut like everybody else [13 percent to be exact], but we are going to continue to fund it and there are no future plans to do anything different.”

“We will not be shut down,” said a relieved Bentley.

This is not the first time the gallery has dealt with budget cuts, so we can hope that it will weather this storm as it has in the past.

Want to verify the importance of First Street Gallery? Ask the artists about it at the reception for the Young Alumni 2007 show during Arts Alive! this Saturday from 6-9 p.m. The show runs through Aug. 5. Gallery hours are Wednesday through Sunday, noon until 5 p.m. Admission is free. First Street Gallery is located at 422 First Street in Old Town Eureka.