A proposed ordinance in Arcata and Eureka would force military recruiters to rethink their strategy — if the ordinance is constitutional, that is 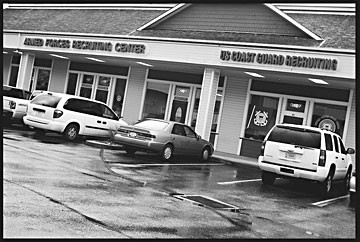 Dave Meserve started thinking about the influence military recruiters exert on young people in the community a couple of years ago. He was sitting in a coffee shop one morning when a recruiter walked in with three high school-aged girls. "He bought them sweet coffee drinks," the former Arcata City Councilmember recalled in an interview last week. Then the National Guard recruiter began "painting a very rosy picture" of military service. He even assured the girls, Meserve says, that "there would be almost zero chance that they would be called to serve in Iraq." Meserve wrote his phone number down on three pieces of paper and handed them to the girls. He said he could put them in touch with veterans if they wanted another perspective on serving in the military.

The US Army Recruiting Command has a motto: "First to contact, first to contract." A 2004 school recruiting program handbook gives recruiters all sorts of advice as to how to best get their foot into the door of their local high school: "Offer to be a chaperon for or escort for homecoming activities and coronations"; "Deliver donuts and coffee for faculty once a month"; "Eat lunch in the school cafeteria several times each month"; "Know your student influencers." In short, "[T]he good HS [high school] program is a proactive one; the early bird gets the worm."

Reached on his cell phone last week, Douglas Smith, spokesperson for US Army Recruiting Command in Fort Knox, Ky., said these techniques are still standard practice among recruiters. "Going into high schools and being able to talk to high school juniors and seniors is very important," he said. "Recruiters have to plant the seed."

Six months ago — and in light of the military's proactive recruiting techniques — Meserve drafted a citizen's initiative — the Youth Protection Act — which, if passed, would make it illegal for recruiters to initiate contact with minors anywhere in Arcata and Eureka, even over the phone. Recruiters would be subject to a $100 fine for each infraction. Minors would still be able to contact recruiters on their own, and recruiters would be allowed to set up tables on school campuses. But it would draw a clear line in the sand between the community's young people and the military personnel who try to recruit them.

The one problem with Meserve's legislative solution to what he considers an "illegal" war in Iraq is that it may be unconstitutional. Still, Meserve has tried to learn from the mistakes of counter-recruiting activists from both coasts in drafting the proposed law.

The most recent clash between recruiters and community members occurred in Berkeley, where, at the beginning of the year, the City Council told local Marine Corps recruiters they were "uninvited and unwelcome intruders." The declaration led to a strident backlash, not just from active-duty soldiers, veterans and their friends and family, but even from critics of the Iraq war who felt the city council had gone too far.

Meserve is quick to distance himself from what happened in Berkeley. "Berkeley's approach is entirely different, and one thing I want to ... make very clear," he said, "is how different it is because our approach is specifically gauged at not being anti-military and merely focuses on the inappropriateness of ... initiating contact with anyone under the age of 18."

At the heart of the problem with outright barring recruiters from cities and schools, rather than just limiting first contact with minors, is the prospect of losing federal funding dollars. Shortly after Berkeley's City Council castigated local recruiters, Republican senators sponsored a bill to divert $2.3 million in federal funds from Berkeley to the Marines.

The potential loss of federal funding also caused Yale Law School to opt out of barring military recruiters from their campus. Yale wanted recruiters to sign an anti-discrimination pledge before participating in on-campus job fairs, but recruiters refused since such a pledge ran counter to the military's "Don't Ask, Don't Tell" policy. Last year, an appeals court ruled in favor of the Department of Defense, citing the Solomon Amendment, which allows the federal government to withhold federal funding from schools and universities that don't provide equal access to military recruiters.

When it comes to high schools, the issue is No Child Left Behind funds, which could also be withheld if schools bar military recruiters from coming on campus. Meserve has made a concerted effort to write such pitfalls out of the Youth Protection Act.

"This ordinance doesn't even mention the word 'school' in it," he said. "If it passes, it will not be a school board taking any action, it will be the people of Arcata [and Eureka] taking the action. And rather than limiting access to schools, it specifically limits the access to anyone under the age of 18."

But it could still run into problems, according to various law experts.

Joe Grodin, Distinguished Emeritus Professor at UC Hastings College of Law and former Associate Justice of the California Supreme Court, wonders if the proposed initiative isn't in conflict with the First Amendment.

"Just as a civil libertarian, it bothers me," he said last week from his Berkeley home. "It troubles me to think about having laws that protect people from speaking to kids because we don't like the message, unless it's pornography or speech that is seeking to induce them into unlawful activity like drugs. I think probably there is a First Amendment right to hear the message."

But Peter Scheer, Executive Director of the California First Amendment Coalition in San Francisco, doesn't think the proposed ordinance rings any First Amendment bells, even though he said the government does have First Amendment rights and the recruiters' freedom of speech would be implicated in such a situation. The more glaring problem, he said, is the fact that the ordinance conflicts with the Constitution's Supremacy Clause.

"The law is probably unconstitutional," he said when reached on his cell phone last week, "because it encroaches on the federal government's exclusive sovereign authority to raise and maintain a military, including engaging in the recruitment of people."

Volokh likened the situation, hypothetically, to the cities of Arcata and Eureka trying to limit the powers of federal investigators when it comes to busting dope growers. "A subdivision of the state of California can no more control what the federal government does than it can say [to a federal agency like the FBI] we refuse to let you arrest people in our county," he said. "That's a federal power that no individual state can try to prevent the federal government from exercising."

None of this is particularly news to Meserve. He's aware that the federal government may contest the law — at the same time, he's hopeful they won't. "It is possible that it won't be challenged ... because they'll think it's too small; why bother for the number of recruits that they get," he said. According to Meserve the number of local recruits annually is somewhere between 20 and 30.

This also isn't the first time Meserve has taken on the federal government in a manner that may prove to be unconstitutional. In 2003, when Meserve served on the Arcata City Council, he spearheaded an ordinance that outlawed compliance with the U.S. Patriot Act by city employees. Meserve told the San Francisco Chronicle then that the law was "probably illegal, if you accept the Patriot Act as legal."

In the end, Meserve has his fingers crossed that the constitutionality of the proposed ordinance — which appears, he says, to have broad support in both Eureka and Arcata — won't ever come into question. After all, the Patriot Act ordinance has yet to be challenged, despite the fact that it inspired other cities — including Seattle and Minneapolis - to pass similar ordinances.

He said of his latest brainchild: "The best-case scenario is if we never [have] to issue a ticket and it just [makes] them leave the kids under 18 alone — that would be great."