Fish Out of Water

Salmon advocates are going to court over Trinity River water 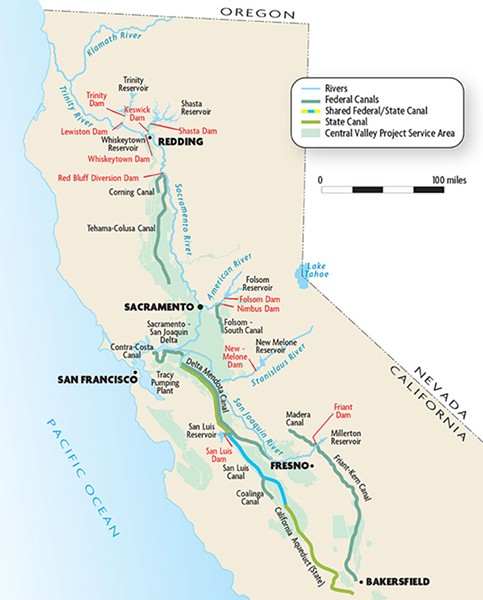 Map courtesy of the Bureau of Reclamation Map of the Central Valley Project service areas.

What's at greater risk — today's fish or next year's farms?

That's the crux of a fight between Central Valley irrigators and the federal government that goes before a federal judge in Fresno this week. Three days of hearings are anticipated to wrap on Friday, with fish friendlies arguing for water to flow downstream and farmers saying that would threaten reserves for next year's crops.

It's not going to be easy, say North Coast fish advocates — the judge appears to favor agriculture to the south, and time is running out for this year's salmon, which are expected to return to the Klamath and its tributaries in large numbers soon.

At issue is a precious stash of water east of Weaverville that's been at the center of water disputes since the 1950s: the Trinity Reservoir and the lower Lake Lewiston. From the reservoir, the Federal Bureau of Reclamation can either pump water through a series of dams and tunnels into the Sacramento River, where it sates thirsty farmers to the south. Or the bureau can release water into the Trinity River, which winds past Willow Creek and Hoopa before spilling into the Klamath and out to the Pacific.

The Trinity Dam, completed in the early 1960s, holds more than 2.4 million acre-feet (one acre-foot would cover an acre of land with a foot of water), and both fishermen and farmers clamor for every drop.

A large population of chinook salmon is preparing to swarm out of cold Pacific Ocean waters into the Klamath, and if the water is too low or too warm to keep them healthy, they will die. The dry year combined with the large run has prompted fishermen, tribes and local government officials to call on the Bureau of Reclamation to release more water into the Trinity River. That release, they argued, would help prevent a fish kill like the one in 2002, when low, warm water conspired with disease to kill tens of thousands of returning salmon.

Their proposed solution worked last year, they said, when the bureau released extra water under similar conditions that threatened an even larger run of chinook.

This year, the bureau issued a plan in early August to have 2,800 cubic feet per second flowing past Requa, near the mouth of the Klamath, by Aug. 15. But on Aug. 13 — less than a day after increased flows began — a federal judge issued a temporary restraining order stopping the bureau from letting more water out of the dam.

Two Central Valley irrigators — the San Luis and Delta-Mendota Water Authority and the Westlands Water District — sued the bureau, saying it didn't have the legal authority to release water that could otherwise help farmers next growing season.

The districts fear water released down the Trinity will threaten their February allotments from the Central Valley Project, the system of dams and reservoirs that helps water farms on the west side of the Central Valley from Stockton to south of Fresno. In the lawsuit, the districts say they were given only 20 percent of their contract supply this year, and barring an "extraordinarily wet winter" will face shortages again in 2014.

Water released from Trinity Lake is split just downstream at the Lewiston Dam and sent down to the Klamath or pumped through a series of tunnels, power stations and dams to the Sacramento River south of Shasta Lake, where — in wet years — it can eventually reach the Central Valley water districts.

Fresno Judge Lawrence J. O'Neill delayed the release, saying he needed more evidence of a threat to fish. O'Neill scheduled a hearing beginning Wednesday and put the burden of proof on the Bureau of Reclamation — a last gasp for fish advocates.

What are their chances?

"It sounds like the judge is waiting for dead bodies to appear before he releases more water," Stokely said.

"[We] have our work cut out to explain how important this is," he said. While the Trinity River continues to warm, Hasselman said the hearing is a "good opportunity to step back a little bit and have the time to tell the story in more detail."

Putting the burden of proof onto the defendants in the suit isn't unusual, Hasselman said, but it does show that Judge O'Neill is inclined to side with the plaintiffs — at least so far.

"We're going to put on the most expert fishery biologists in the world to explain why these kinds of actions are necessary when you have critically low flow conditions and very large adult run," Hasselman said.

EarthJustice is representing the Pacific Federation of Fishermen's Associations, which joined the Hoopa Valley Tribe and Yurok Tribe as co-defendants with the bureau after the lawsuit was filed.

Some are concerned that some damage to the salmon run is already done. In press releases over the last few weeks, even before the court stopped water releases, the Hoopa Valley Tribe called the planned release "too little, too late."

The chinook are beginning to show, and they're healthy — if reluctant — so far.

The Klamath Basin Monitoring Program — a collaboration among tribes, fishermen, restoration groups and government agencies — continued a "yellow alert" for fish health last week. The alert has been in place all year due to anticipated low water, said Sara Borok, an environmental scientist with California Fish and Wildlife who works with the monitoring program.

Fish got a little extra help when the bureau released some water before the injunction was handed down, she said. And, in a bittersweet twist, smoke-heavy air above the Klamath and Trinity Rivers — results of massive fires in Northern California and Southern Oregon — has kept rivers a bit cooler than expected.

But temperatures are climbing toward 73 degrees at the mouth of the Klamath, Borok said, the maximum at which salmon migrate. Fishermen have reported to the monitoring program that they've seen incoming chinook salmon turn back to the ocean after encountering the warm Klamath water.

It's spawn or die for those chinook, Borok said, so the fish will only hover off the coast for a short amount of time before plunging upstream, warm water or not. Chinook essentially live off fat reserves for their last trip upriver, Borok said, further limiting the amount of time they have to finish their run.

As fish hover at the mouth of the Klamath, Humboldt County supervisors have called on Judge O'Neill to lift the injunction, and attorneys for both sides are preparing for hearings in Fresno.

There are three possible outcomes of this week's hearing, Earthjustice attorney Hasselman said. His hope? The judge "changes the direction he seems to be going, dissolves the injunction and the water will flow."

Or, the judge keeps the injunction, in which case there's "a very good chance of emergency appeal to the 9th Circuit Court."

Finally, there could be an effort to "split the baby," Hasselman said — a partial release. That's problematic, he said, because it might not work from a biological perspective — scientists and the Bureau of Reclamation settled on a desired flow as a necessary minimum.

Despite huge economic and cultural impacts that will follow Judge O'Neill's ruling, the dispute is a drop in the bucket for California water fights, because state and federal governments have promised far more water than can be wrung out of California's rivers. And no one knows how that's going to work out amid a changing climate and more water demands ahead.