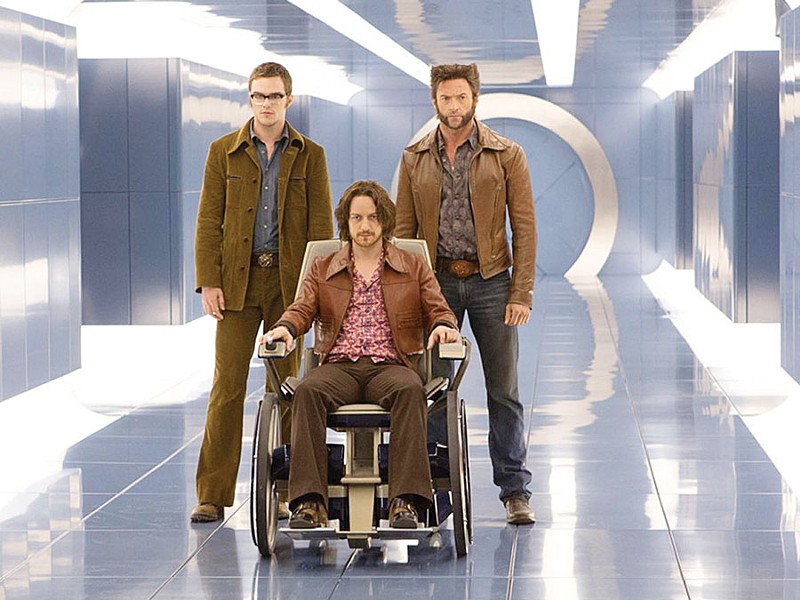 X-MEN: DAYS OF FUTURE PAST. As a fledging geek dipping a toe in the ocean of comics, the X-Men were too much for me. Ditto the whole Marvel Universe, but the X-Men in particular were so many, each with his or her own convoluted origin story, all entangled in myriad plotlines across an incomprehensibly wide world. It was more than I could take in back then, and it's getting to be more than I want to deal with now, as yet another gigantic sequel comes rumbling into the multiplex. Still, I got a lot out of 2011's X-Men: First Class and last year's The Wolverine.

Days opens on a bleak near-future Earth, where mutants are relentlessly hunted by unstoppable machines called sentinels. One small group of rebels stays in the fight by time traveling in the midst of battles to forewarn themselves of attack. Professor Xavier (Patrick Stewart), Magneto (Ian McKellen), Wolverine (Hugh Jackman), et al. catch wind of the group's methods and track them down in a last ditch effort to save their race. They've traced the beginning of the mutant apocalypse to a day in 1973, when Mystique (Jennifer Lawrence) assassinated the arms tycoon Dr. Bolivar Trask (Peter Dinklage), who developed sentinel technology. Their hope is to send one of their own back in time to stop the assassination. Of course, the only one who can physically survive the journey (it's complicated) is Wolverine, so he's off. He seeks out a young Xavier (James McAvoy) who, having shuttered his school and abandoned his powers, seeks solace mostly in the bottoms of bottles. He reluctantly agrees to help, and they go on to liberate young Magneto (Michael Fassbender) from a top-secret government prison. (The set-piece sequence wherein they make their daring escape, aided by Peter Evans as Quicksilver is one of the movie's highlights.) Once they've got the band back together, it's off to Paris to intercept Mystique at the Vietnamese peace accords. But of course nothing can be that simple.

Although I'm not entirely convinced by director Bryan Singer as a visual stylist, or even as a storyteller, he knows how to hold together a multi-hundred-million-dollar production. The cast is as top-loaded with prominent talent as any we're likely to see this year. The effects are second to none, and the 1970s look and feel are executed well. But the future sequences are noisy, dark and hard to follow. Characters are thrown at us with no introduction, only to then launch in to painful expository monologues. The first act rushes from scene to scene but stills feels slow. The movie finds its footing midway through, and then it's smooth sailing until the climax, which gets drawn out beyond its ability to sustain tension. But the lead performers give it all they've got, and there are enough moments when the action and the production design make Days of Future Past an enjoyable distraction. PG13. 131m.

THE RAILWAY MAN. Once upon a time, we saw a lot more of these movies: period dramas about a tortured protagonist, often with a violent history. I'm not sure whether our tastes have changed, or if the entertainment business has shifted our perspective with what it offers, but this feels like it came from a long time ago.

It's 1980. Eric Lomax (Colin Firth), railroad enthusiast, meets Patti (Nicole Kidman) on a train, naturally. They fall in love and get married, but there is darkness in Eric that he refuses to discuss. He has night terrors, can't pay his bills and reacts with violence in inappropriate situations. Patti seeks out Eric's friend Finlay (Stellan Skarsgard) for insight, but he won't reveal much, either. Gradually, through flashback, we learn that Eric was a soldier in the British Army Signal Corps when Singapore fell to the Japanese in 1943. He was taken prisoner, along with thousands of others, and conscripted as a slave laborer to build a railroad through Thailand. During this period, he was singled out and tortured. In the 1980 timeline, Finlay informs Eric that his primary tormenter (Hiroyuki Sanada) is still alive and provides him with the man's whereabouts. Eric sets off to exact his revenge.

Again, this is decidedly old-fashioned stuff. The cinematography is pretty and lush and conventional. The performances are strong and the characters troubled and nuanced. The ideas explored in the script — the meaning of revenge, the capacity for forgiveness, the ability of the human mind to survive trauma — are important, and the film comes close to the psychological realism in terms of the toll of war. But The Railway Man is weakened by its moral middle-ground and the tameness its "happy ending" requires, which undermines its other successes. R. 116m.

BELLE. Gugu Mbatha-Raw stars as the peculiarly privileged and disenfranchised daughter of a British admiral and a slave in pre-abolition England. PG. 104m.

A MILLION WAYS TO DIE IN THE WEST. A farmer (Seth MacFarlane) tries his trembling hand at gun slinging in a duel with a black-hatted Liam Neeson. R. 116m.

BLENDED. A Sandler-Barrymore rom-com in which a mismatched pair of single parents get together for the kids on a tropical vacation. PG13. 117m.

GODZILLA. The big guy returns with puny, human co-stars Aaron Taylor-Johnson and Ken Watanabe. The effects impress, but there's too much going on to focus on the lizard and its destructive glory. PG13. 123m.

MOMS' NIGHT OUT. Zany adventures ensue when a group of mothers take the evening off, leaving the kids with the dads. Because men taking care of children is just crazy talk. PG. 99m.

NEIGHBORS. Suburban parents (Rose Byrne and Seth Rogen) go to war with the frat next door and their oft-shirtless prankster leader (Zac Efron) in this crude but effective comedy R. 97m.

THE OTHER WOMAN. Cameron Diaz, Leslie Mann and Kate Upton are women done wrong by a clichéd plot and a thrown-together script. PG13. 109m.

RIO 2. Endangered macaws Blu and Jewel are back for franchise cash — ahem — and to find long-lost family in the Amazon. It's a mess, but a colorful one the kids seem to like. G. 101m.