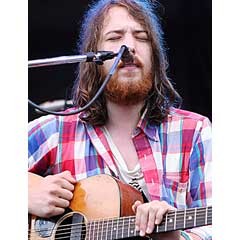 Robin Pecknold, lead singer for Fleet Foxes, summed it up nicely as soon as he hit the stage at the Arcata Community Center last Monday: "I've really got a bad case of school-dance anxiety right now. It's like this is junior high, and we're the house band for the most uneventful teen-movie ever made. But don't let that discourage you from slow dancing."

The evening started out with a set by Blitzen Trapper, seeming to me an uncoordinated combination of Elton John with a bit of Journey, but far less epic on both counts. Squealing away with guitars pounding, they really had no business rocking out. If they'd just stayed to the a cappella interludes they would have been much better off. But that was Fleet Foxes' job.

After a separation of the crowd, individuals 30 and over to the bleachers and those under to the stage front, Fleet Foxes took to their rightful places to polite exclaim. "We want to thank Blitzen Trapper for opening for us," Pecknold said. "I love Blitzen Trapper."

"I love Blitzen Trapper too," said the bassist.

"I love Journey," offered the drummer. That's what I'm talking about.

By the time "White Winter Hymnal" came around the crowd had loosened up somewhat and actually dared to dance, though they simmered down quickly as the song came to a close, one individual's "thank you!" cutting clear across the court.

"I don't mean to denigrate this space at all, we're really appreciate of this," Pecknold began while scoping out the room, "but have any of you ever played 'horse?'"

"We played an hour and a half-long game of 'cat' today," the drummer (who's actually Josh Tillman, the genius behind album Vacilando Territory Blues, by the way. I didn't even realize it at the time) finished. "We should have called it 'miss.'"

And so the evening continued -- a few harmonic favorites followed by a period of enjoyable conversation and then again the music. After some time of representing my student status at the front, I infiltrated the comfortable lair of the elders on the bleachers, catching some respite from the sidelines. As I closed my eyes, I smiled to hear the familiar chords of my favorite song, "Mykosis," even though the bridge is stolen straight from Neil Young's "Ohio," but that's a great song too. I experience one of those moments of bliss like you do when the band plays your favorite song, except that the show's suddenly over and everyone's on their feet clapping when I open my eyes. As I leave to beat the crowd, I get sucked back at the door for an encore of "Blue Ridge Mountains" featuring members of Blitzen Trapper on tambourines and maracas, a perfect end to a beautiful and fulfilling evening in the least likely of places.