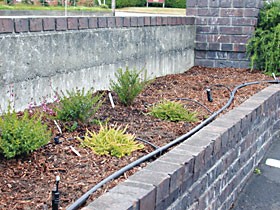 A few years ago, I wrote a tirade on the subject of flower theft. My front yard is full of flowers, and I understand what a temptation this can pose to people walking down the sidewalk. But some of the thieves in my neighborhood were particularly conniving, walking right up to my front door and slicing off the very best blooms with a knife they had brought just for that purpose.

I got more mail after that column ran than I have for anything else I’ve ever written. Everyone had a flower theft story to tell me. It took two or three more columns just to print them all. I thought I was done with the subject, but what happened instead is that I gained a reputation as the person you should call if somebody steals your flowers. And so it is that with some trepidation I return to this subject, knowing that I am only opening the floodgates for more tales of woe.

We begin with the story of a friend I’ll call “Lola.” Lola was puttering around the house the other day, minding her own business, when she looked outside and saw someone picking flowers in her garden. Not just snapping off a daisy as she walked by, but actually strolling around in the garden, with scissors that she had brought just for that purpose, putting together a large bouquet. And she wasn’t just picking flowers from the garden. She was also snipping the blooms off plants that Lola had just brought home from the nursery. “They were still in their plastic pots,” Lola told me. “I hadn’t even had a chance to put them in the ground.”

As you can tell from her imaginary name, Lola is no shrinking violet. She got to do what most of us only fantasize about doing — she confronted her plant thief in person. “And you know what?” she said. “This woman did not even apologize! She didn’t even act like she was embarrassed to be caught.” The plant thief muttered a few spiteful words back, and wandered out of the garden, looking around as she left as if she was still shopping.

Another particularly heinous element of this crime was the fact that many of the flowers she picked were wildflowers that would wilt in a couple of hours anyway and wouldn’t even last in the vase. That’s the thing about the complicated relationship that we gardeners have with the criminals that turn up in our gardens. If they are cunning enough to bring their own equipment, choose the most rare or interesting plants or arrange a particularly striking bouquet from the best cut flowers we grow, we consider them to be conniving thieves, plotters and planners, and we are appalled that we have been the victim of a premeditated crime by a hardened and experienced criminal.

On the other hand, if they show their ignorance by pulling up flowers that don’t last in the vase or ripping out a plant that can possibly survive a transplant, we’re irritated that we’ve been taken advantage of by such an idiot. Basically, if you’re a plant thief, you can’t win.

Lola wasn’t the only one suffering the indignities of a horticultural crime. I also got a call from Stephanie Brittain, office practice manager for North Coast Women’s Health. The medical practice had recently moved to a new building on Myrtle Avenue, and as soon as they got settled in, they began sprucing up what little space they had for plants and flowers. They called on Maria Krenek at Glenmar Heather Nursery, who put in a lovely assortment of heathers that would fill in the planter boxes, provide some color all year long and not demand too much care.

“She put in all these heathers,” Stephanie said, “and on the first night they were in the ground, somebody came by and took five of them.” That day, they installed a motion-activated light to discourage thieves. But the next day, seven more were gone. “We really want to replace them,” she said, “but what’s the point if somebody’s just going to walk off with them?” Stephanie did call the police, and they sent her a form that she could fill out and return. It didn’t quite have the same dramatic impact as a bunch of squad cars pulling into the parking lot with their sirens blaring, stringing up yellow crime scene tape and putting chalk outlines where the plants once were, but Stephanie said that she understands that the cops have more important things to do. Still, filling out a police report is — well, something.

Here’s what so irritating about plant thefts. The people who steal plants right out of the ground must not really be gardeners. If they were gardeners, they would understand that plants cost money. They’re not just these free things that happen to sprout up out of the ground by chance. A person who would never take your wallet or steal a candy bar from the drugstore feels perfectly comfortable taking a plant that you paid $7.99 for and then spent time planting, watering, feeding and fussing over.

So surely these people aren’t gardeners, right? They’re non-gardeners who imagine that plants have no monetary value and are therefore free for the taking, right? But on the other hand, they feel such a strong desire to garden that they’re willing to resort to a life of crime just to experience the thrill of putting a plant in the ground?

Really, it’s a mystery. If you’ve got any insight or any plant theft stories of your own, drop me a note.